According to a Yahoo! Food post – sourced from Business Insider – there are rumblings that Pepsi Co. could be poised to bring the crystal-clear version of their flagship beverage back from the grave, to the delight of 90s children everywhere looking to recreate their 11th birthday party experiences.

Haley Peterson, of Business Insider, had this to say:

The drink might be making a comeback now thanks to an online campaign begging for its return. The campaign was launched by Kevin Strahle, who has more than 1.2 million subscribers to his YouTube channel. 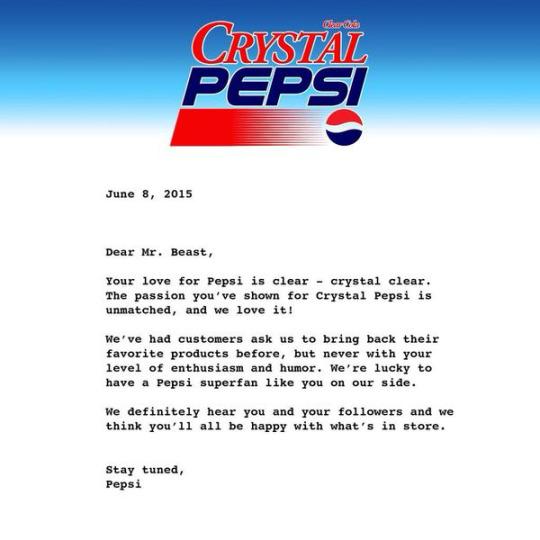 The beverage was originally deployed to test markets in 1992, and then received a wider release just one year later – igniting a clear-pop firestorm, leading to Coke’s clear TAB soda… expectedly titled Tab Clear.

Personally, I remember being so utterly fascinated by the removal of Pepsi’s colouring that the drink completely overshadowed the goings-on at a birthday party I attended in the early ninetes – it was all I could think or talk about afterwards.

Only now am I realizing how sad that is, but anyway, it was POP and it was clear!!! It’s hard not to get whipped up into a fury with advertising campaigns as high-concept as their launch spot:

Unfortunately, all that glitters is not gold, or… something… because Crystal Pepsi disappeared a few years later, leaving us all to move on with our brown-tinged sugar-infused beverages. Some say it was poor sales, and others – like David C. Novak, the creator of Crystal Pepsi himself – had other thoughts about its failure:

It was a tremendous learning experience. I still think it’s the best idea I ever had, and the worst executed. A lot of times as a leader you think, “They don’t get it; they don’t see my vision.” People were saying we should stop and address some issues along the way, and they were right. It would have been nice if I’d made sure the product tasted good. Once you have a great idea and you blow it, you don’t get a chance to resurrect it.

Some information on Wikipedia helps lend legitimacy to the Yahoo! announcement:

In 2005, a new clear Pepsi was sold in Mexico as Pepsi Clear for a limited time. On August 22, 2008, PepsiCo filed for trademarks on the product names “Pepsi Clear” and “Diet Pepsi Clear”.

Thankfully, there seems to be a clear-drink renaissance going down these days as well, what with the revival of New York Seltzer announced in May of this year.

With all of this information piling up, the future is looking clear – crystal clear. (I’m sorry.)

Premiere: A Copy For Collapse's "Alone" off Waiting For LP