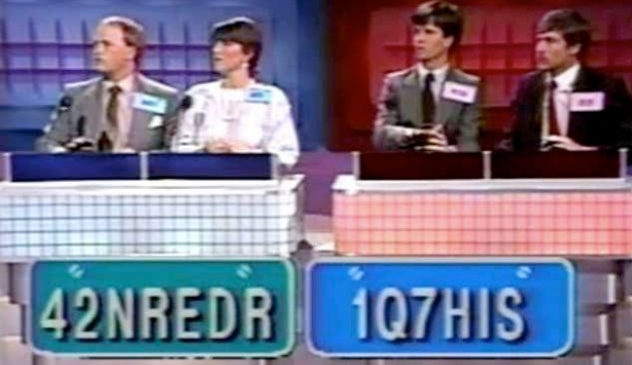 As a kid, there very well may have been nothing better than hiding out in your basement during the hot summer months and mainlining a few hours of cheesy, silly Canadian game shows. Well, I was pretty much an indoor kid, so maybe that was just me.

Anyway, these shows were staples of network programming; episodes would pop up here and there, seemingly in an attempt to stretch out and fill time. I seem to recall them popping up a lot mid-day on Saturdays after the best shows were but an early-morning memory. Here’s a list of some of the more memorable shows, from the weird-elbow clapping of Kidstreet to Bumper Stumpers, check out these Canadian game shows you completely forgot that you loved to watch!

If you walk up to most people and say “Remember Kidstreet!?”, odds are they’ll look you straight in the eye, put their arms over their heads and do the iconic Kidstreet overhead-clap.

Kidstreet aired from 1986 to 1992, and was produced in Calgary. The contestants on Kidstreet didn’t just sit behind podiums, no, they sat in replica race cars. This might lead you to think the show has something to do with sports, or racing around in those cars, but no – it’s basically The Newlywed Game but with children.

Me, I’m more interested in that overhead clapping thing – was it because they couldn’t fit their arms into the cars without bumping them around when they clapped, or what?!

Only airing for one year – September 1981 to September 1982 – Pitfall was a game show hosted by the one, the only, Alex Trebek! Was this short-lived show based off the video game of the same name? No. It wasn’t.

Unfortunately, Trebek isn’t hopping around on crocodiles on this show, but instead the game involves contestants predicting how the audience answered a series of questions – so, actually it’s not unlike that one Timeplay game before movies that you control with a smartphone. Finally, the winner gets to play in the Pitfall round, answering questions and trying to avoid the titular pitfall.

Fun fact: the production company went bankrupt and none of the winners ended up receiving their pay-outs for their performances! To make matters worse, Trebek didn’t even get paid for his hosting duties – which lead him to call the show one of the “great tragedies of his life”.

Fortunately for him, he went on to host a little show called Jeopardy! shortly thereafter.

Just Like Mom ran for five years on CTV – which seems like a long time for a game show that ultimately amounts to Moms embarrassing their children on television for everyone to see. Also, it totally brings to my mind the Motherboy episode of Arrested Development.

Tthe show revolved around figuring out which mother-contestant and child “knew each other” the best – achieved through both a quiz round, and a bake-off round where the children attempt to complete a recipe from the Robin Hood branded Just Like Mom Cookbook.

There’s plenty of clips from the show available on YouTube, and in most of them the children are just not having a good time – from the looks of it. Check out the kid at the beginning of the embedded clip above – he is not happy to be there. You can almost feel the “UGH, MOM!!!” vibes.

“GO FOR THE BIG WHEEL OF CHEESE! GRAB THOSE COOKIES AT THE END OF THE AISLE! GO!” – Me, watching Supermarket Sweep as a child.

I don’t exactly know why I was so into Supermarket Sweep as a child, but I was definitely really into it. I remember wanting to yell at the contestants about what they should be grabbing, or how they were taking a poor route through the store.

If you didn’t know already, Supermarket Sweep involved contestants playing rounds of question-based trivia – usually related to the products that sponsors were shilling, they involved figuring out product jingles, making animal sounds or un-scrambling product names – before taking a run through “The Big Sweep.”

This part of the show is probably what you remember most if you were a fan of the game – since it’s the exciting part where contestants ran around a supermarket, furiously dumping groceries into their baskets faster than the kids in Ernest Scared Stupid tossed milk into their shopping carts. Certain items had special point-bonuses, and the team with the higher the score after “ringing through” their groceries, won.

The show itself was technically a re-boot of an American game show, which even received a home board game version in the ’60s. The Canadian version of the show ran from 1992–1995.

All the fun of looking out a car window and trying to decipher vanity license plates, with none of the traveling! That’s pretty much it, there’s not much else interesting about this show.

Bumper Stumpers was the plain white bread of Canadian game shows, and was even hosted by a Global Television weather man; I can pretty much guarantee that if you’re reading this as someone who grew up in Canada, then you’ve seen at least an episode or two of Bumper Stumpers. If you haven’t, then the jist of the rules were as follows: two contestants attempt to decipher novelty vanity license plate puzzles for cash prizes.

The show ran from 1987 to 1990, which seems short considering how many times I caught the show on television in my youth.

The Video & Arcade Top 10 introduction theme (itself inspired by Mega Man II) has been permanently burned into my brain – so much so, that when I clicked play on the video above, a wave of nostalgia flowed back. V&A was one of two quintessentially 90s themed game shows to broadcast on YTV, the other being Uh Oh! which was a spin-off of the sketch comedy show It’s Alive!

V&A is notable not only for its video game challenges, but also for being an all-around pop-culture promotion juggernaut – on top of the latest video games (like WCW Superbrawl Wrestling and Justice League: Task Force for the Super Nintendo) the show also featured promos for the latest movies to hit home video, a tips and tricks segment, mail-in contests, and the latest sounds from the world of music. Also, there’s a mail-bag segment where fans could have their letters (often featuring more video game combos and tips) read on-air or hung on the brick wall background.

It’s easy to see why the show was as popular with younger folks – myself included – as well as a long-runner in the world of Canadian game-show television; the show ran for over 15 years, which is no small feat considering only a few Canadian shows have ever made it that far (including Front Page Challenge.)

The show certainly feels like a precursor to shows like EP Daily (which launched six years after V&A’s debut in 1991.) Heck, the show may very well have influenced today’s flux of pop-culture gab-fest podcasts, where building a similar sense of community through reading on-air listener letters and running contests while devouring the latest video games, film and television is still going strong.

As far as the show’s long-running joke-question about host’s Nicholas Picholas’ real name goes, well, some say that in today’s modern world too many questions are answered… so I’ll let you spoil that one yourself, should you want to.

Did we forget one of your favourites? Add them to the comments below, and get a conversation goin’!