Oh, hell yeah! Erik Estrada stars in Enzo G. Castellari’s LIGHT BLAST! A packed-to-the-gills, mix-n-match sci-fi-action-n-crime flick that has it all: copious amounts of car chases and gunshot squibs, a laser-wielding mad-man who is terrorizing San Francisco and attacking large digital clocks, a ton of Indiana Jones-esque face-melting sequences, and a scene where Estrada carries cooked chicken into a hostage situation and then shoots the bad dudes with a gun hiding in said chicken.

There’s also high-speed dune-buggy chases through the city and plenty of dangerous looking stunts (many highlighted in Code Red‘s trailer above [so I guess it’s technically not a throwback trailer, but you get the idea])- and then, like all good B-flicks, it just ends. 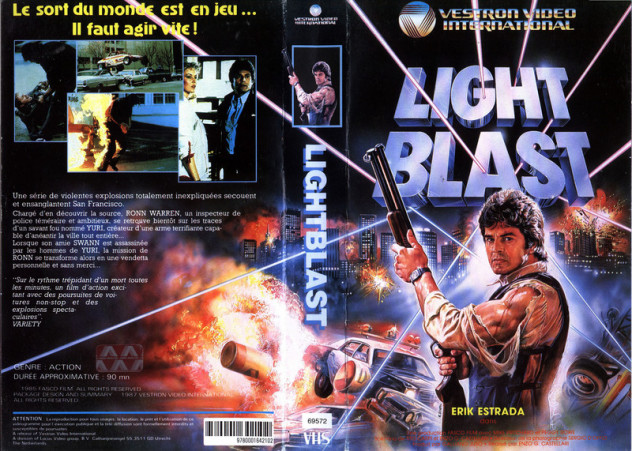 The bad guy is dead, the city has been saved (even though countless people have been melted into piles of steaming face-goo, as well as more than just a few digital clocks have been blown to smithereens) and so… the end! Estrada hasn’t even begun to walk away from the post-carnage wreckage and the credits are already rolling – that’s how you end a picture! Get in, pile on the action, and get out!

It’s all pretty spectacular, there aren’t any major lulls to be found, and Castellari shoots everything in his gritty pseudo-documentary street-level lensing style. I heartily recommend this one – it’s an above average flick with just the right amount of rough-around-the-edges Italian-meets-American action-filmmaking charm.

Programmed to Kill aka The Retaliator (1987)