“A creation gone mad, is about to be unleashed. Prepare yourself for The Retaliator!”

After stumbling upon two of the best YouTube channels around – Atomic Cyborg, and Video Force 1980 – I began working my way through some of the flicks contained therein, often going off whatever videos had the most eye-catching titles and art. First, I started with Action U.S.A., because duh – that’s one way to title your movie! It’s the UNITED SATES OF ACTION! Thankfully, it didn’t let down and you can read my thoughts about that one on Letterboxd.

Next, I moved on to Programmed to Kill aka The Retaliator (1987). Starring Robert “The Exterminator” Ginty, Golden Globe winner Sandahl Bergman (Conan the Barbarian, Red Sonja) and a young Paul Walker (yes, that Paul Walker!!!), the film’s conceit reminded me of Eve of Destruction – which is one that I have been meaning to watch for years, after happening upon it in a rental store as a kid. That one would have to wait for another day though, as today was The Retaliator‘s day. 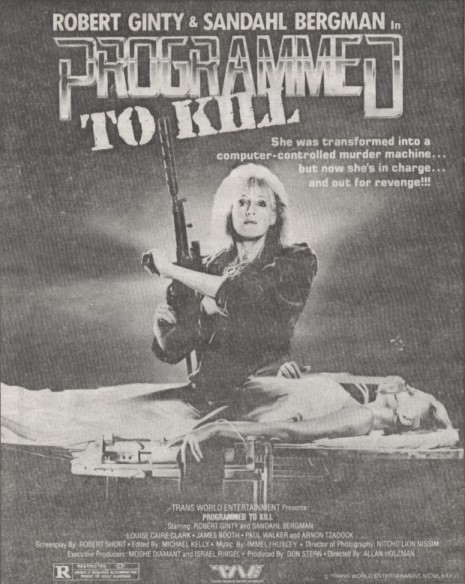 Bergman stars as Samira, one member of an elite terrorist squad who are seen in the opening mowing down and kidnapping a bunch of clean-cut American tourists. It’s actually quite a gripping scene, which sets the tone for a movie that goes on to contain a fairly constant stream of action and suspense that – while not exactly an unexpected classic – does what it sets out to better than most low-budget actioners of this calibre.

Anyway, Samira gets captured by the CIA (who have definitely been watching The Terminator and RoboCop lately) who decide to turn her unto a cyborg killing-machine which they will then use to take out the aforementioned terrorist squad once and for all. The autopsy-to-make-her-a-cyborg scene is pretty gnarly, too – popping out eyeballs and replacing them with cyborg parts while the doctor is acting like a real Grade A dillweed and cracking awful jokes about how she’ll be the ‘perfect woman’ because they’re removing her emotions. Barf. 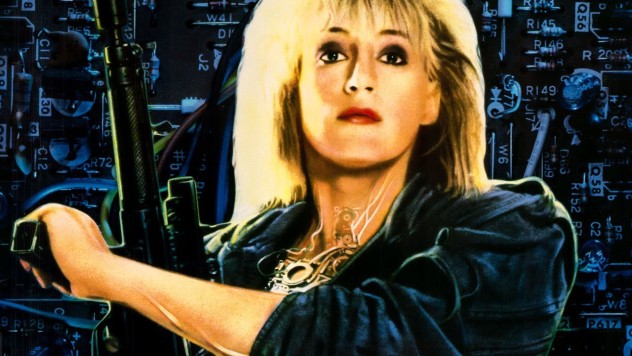 As you can tell by both titles of the film though, things don’t go so well and the CIA loses control of Samira, and bring in Ginty to take her out. It won’t be easy, because Samira is a ruthless and totally bad-ass killing machine – tearing out throats, and just generally kicking all kinds of butt throughout the film. There’s even a boss scene where Ginty escapes a futuristic-architecture-adorned building by jumping and sliding down the side of the building. It doesn’t sound like much, and to anyone else it probably isn’t, but I was pretty happy about it happening.

Anyway, all of this is pretty much exactly what you want from looking at the VHS box-art; Programmed to Kill is definitely not one you’ll toss on and get bored by, as is often the case with these kinds of flicks. One of the characters even keeps a tiny little gun in a snapped-shut clamshell VHS case (or at least it looks like one to me)!

This one is certainly worth popping on at your next pizza fueled marathon, that’s for sure.