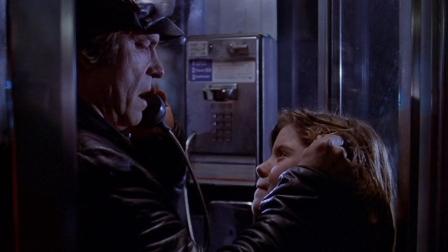 “They don’t see him, but he’s there. A stranger is watching; plotting; planning; and anticipating every move they make.“

This promising thriller from Sean S. Cunningham (Friday the 13th, DeepStar Six) is ultimately a dud thanks to meandering plot and a not-so-menacing turn from Rip Torn.

While by no means a complete waste – Cunningham manages to wring as much suspense as he can out of a few set-pieces here – A Stranger is Watching would have benefited from a tighter adaptation of Mary Higgins Clark‘s bestseller. The film’s suspense mostly works when focusing on Shawn von Schreiber & Kate Mulgre as the kidnapped child and her father’s also-abducted partner and their attempt to escape from under Grand Central Station.

Elsewhere, an inheritance plot and news media undercurrents seem to just be “there” – not fleshed out enough to be interesting but not streamlined to avoid boredom.

Rip Torn is fine as the titular stranger, though he can’t seem to muster any true menace out of his performance – or maybe The Larry Sanders Show is just too fresh in my own mind to see it. Rip Torn is “on display” as the Stranger far too much, where a sense of mystery would have been much more suitable. The film also bumbles a set of reveals, robbing any true surprise from the proceedings.

On the plus side, the film has a successful score with it’s own creepy “theme melody” from Lalo Schifrin, and the acting throughout is solid. It’s a shame that it doesn’t truly come together, as many of the elements for a cracking thriller seem to be hiding within A Stranger is Watching.

Episode 19 - The Brain and Glass Tiger