“When the sun goes down, something stalks the streets of Galen village…”

One teenaged weirdo has been having nightmares about these goings-ons before they occur – could he be the demonic Incubus? John Casavettes (as a new-ish doctor in town) will have to team up with a disgraced journalist to find out – before his daughter becomes the next potential victim!

I went into this movie expecting a lot after seeing some hype around the Internet – claiming it was something of a lost classic – but came out pretty disappointed. Hough strikes a balance between his usually-effective filmmaking style and something a little bit more messy here, while the story plays the entire set-up at face value instead of actually attempting to tackle any of the issues of sexuality it presents. 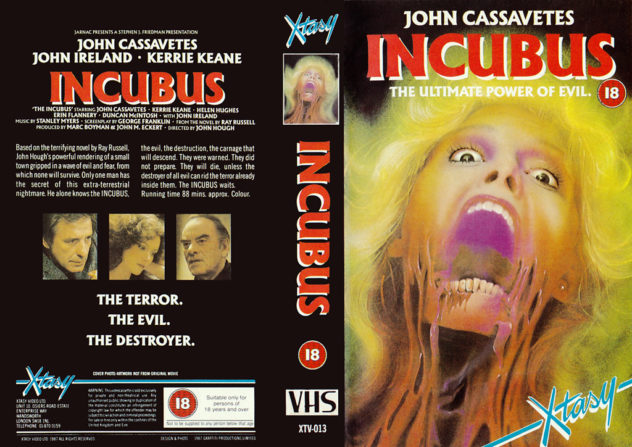 There definitely could have been an interesting angle on this material, but The Incubus doesn’t really have the interest to dive into the subtext, aside from presenting the plot in a well-shot, edited and oft-artful way – which I suppose is more than I can say about some films in this genre, but still feels like a major let down.

It’s just unfortunate that with the talent at play here, there is no real attempt to craft anything other than a fusion of exploitation vibes with a classier tone than usually expected. For some, I can understand why this works so well, but for me I was left wanting a bit more from the execution. That said, there are some genuinely shocking and frightening moments (the scene with the woman in a wheelchair, leading up to an explosive door in particular) and the cast seems game to slum around and meet the material at its level.

Not the hidden gem you might be looking for, but not a waste of time either. I’d say file it in the for later pile and go watch The Sender from 1982 instead.

Also notable: British metal band Samson show up and perform in a movie theater at one point, for some reason.

Episode 39 - Live at the Social Capital with Brian Froud