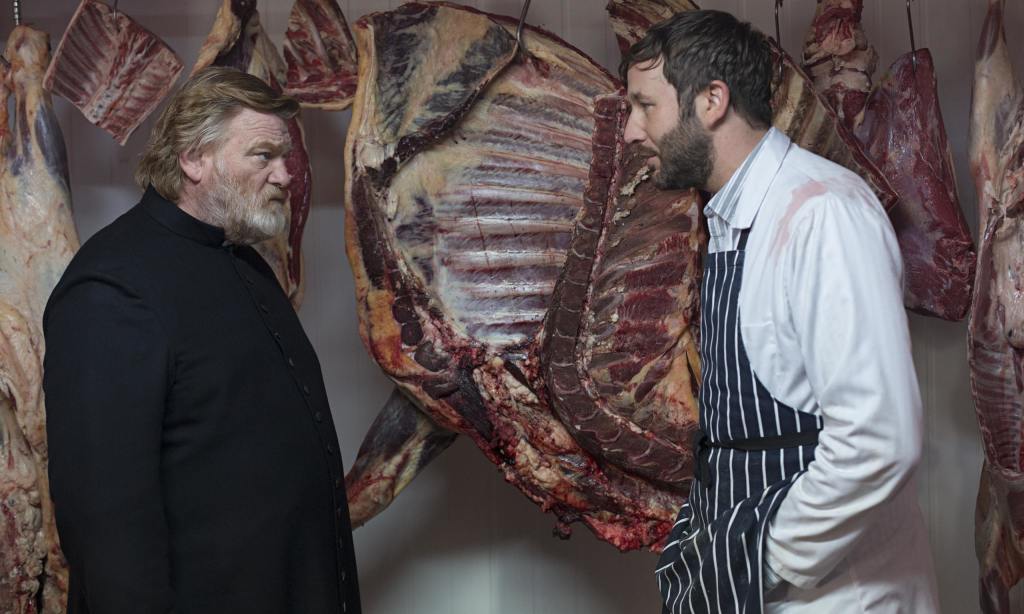 Is our world becoming an effectively amoral place? Maybe it always has been. Or maybe as faith and morality become more and more specific to the individual the old guard of judgment that the church once was has become increasingly unnecessary. In the midst of this mass crisis (evolution?) of faith, one priest must find out who is trying to kill him and everything he believes before it is too late.

The main character of John Michael McDonagh’s Calvary (2014) is religion itself, personified by lone, stalwart priest Father James (Brendan Gleeson) who, while giving confession, is told he is going to be killed in a week’s time for the crimes perpetrated on innocent children by some of the church’s more prurient members. In that week the priest goes about his business, counseling the people of the town who seem less interested in his counsel and more interested in showing him how they’ve forsaken him and his beliefs, choosing to lose themselves in their own self-imposed, almost willful, destruction.

Others in the town still pay service to the church but it is purely tokenistic; the wealthy banker who wants to donate a large sum of money to the church which, in his depressed cynicism, is clearly an act of dominance rather than charity; the lackadaisical police inspector who has less interest in upholding the letter of the law than he has in his favourite prostitute; the doctor who conducts his business saving or losing lives with zero compassion or humanity and believes himself to be all the more professional for it. Truly, religion and God are on the ropes as Father James tries to provide a moral compass to those intent on remaining rudderless. On top of all this he must face the fact that he will probably soon lose his own life for the crimes committed by those with whom he is affiliated.

I am hard pressed right now to think of a movie so far this year that succeeds as effectively and effortlessly as this one does. Now maybe it’s because I have just wiped the tears from my eyes having just finished it a few minutes ago and it is still fresh and aggressively vivid in my mind. But this movie gets as close to what I consider a fair telling of religion’s place in today’s society as a fallible human being can get. It is darkly hilarious and urgent and grim and important throughout the movie and the end offers as solid a stance on faith as one should probably have. You know, in my opinion.

The performances throughout are amazing with Brendan Gleeson anchoring the film brilliantly as a man who understands that faith is a fluid concept and that there is a functional morality that we all inherently share, but that it is so easily corrupted and manipulated in the name of convenience, greed or just plain fear. He plays the complexity of his inner debate with charm and frustration in the perfect measure. Chris O’Dowd is another standout here as a man content to let life happen to him as if he has no defense beyond joyless, compulsive humour.

Maybe this movie isn’t for everyone, it does get pretty heavy (though never heavy-handed) and at times could almost be considered off-putting in it’s bleak assessment of the world. Although it does have this weird trick of being clever and engaging whenever something upsetting is happening.

I highly suggest you all see this movie, it offers a unique and beautiful perspective on a subject that we’ll be debating until the day we all find out for sure.