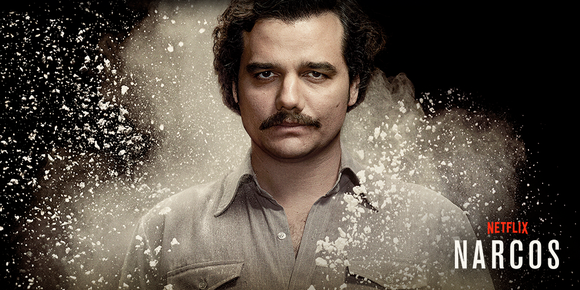 Hello Frequent Flyers and welcome aboard our 65th episode, Narcos.

On this flight, we take a romp through the idyllic city of Miami, early 1970’s. Flip flops, Hippies and Farrah Fawcett hair rule the scene and the DEA all have their eyes on that Devil’s Lettuce, if you catch our drift.

Then a Cockroach survives the end of the world and makes his way to Columbia, to Pablo Escobar.

When American DEA agent, Steve Murphy, left for Columbia he’d left with the same sense of destiny that just conquerors have. One year later, the world’s gone to shit, and it doesn’t matter how many people take a lead for their pains, sometimes the end justify the means.

But whose means, whose ends? The end of the world keeps coming, so who will rise above?