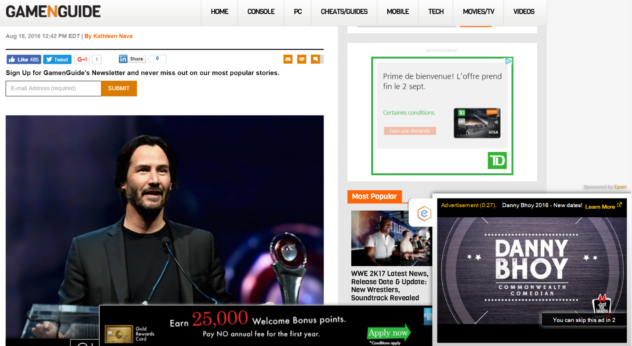 Gamenguide – a website that totally isn’t stuffed with advertisements and clickbait – have again reported on the possibility of a Bill & Ted sequel, which would mark the third entry in the film-series and probably fourth time they’ve made a new post about it with no new information.

In between banner ads and rolled-out, content covering images, the piece collects multiple sources – from Entertainment Weekly to IGN – and barely hints at the content promised within the attention-grabbing headline. In both accounts, Keanu Reeves claims that Bill & Ted 3 is “still happening” but there is absolutely no firm timeline on when to expect the film; Reeves also goes on to say the film will be “funny” and muses about his current relationship with co-star (now documentary filmmaker) Alex Winter while Gamenguide inserts multiple links to other articles about the same topic that offer no new insights aside from other attention grabbing key phrases such as “spoilers” and “update.”

For more information, we suggest you read the interviews yourself and form your own conclusions; as for me, I’m not entirely sure the world needs a new Bill & Ted film, but should one come to fruition, it’d make me happy that those who are excited about the possibility of revisiting the beloved chatacters would get to; now that’d be excellent.

Luke Skywalker Will Live To See Another Star War