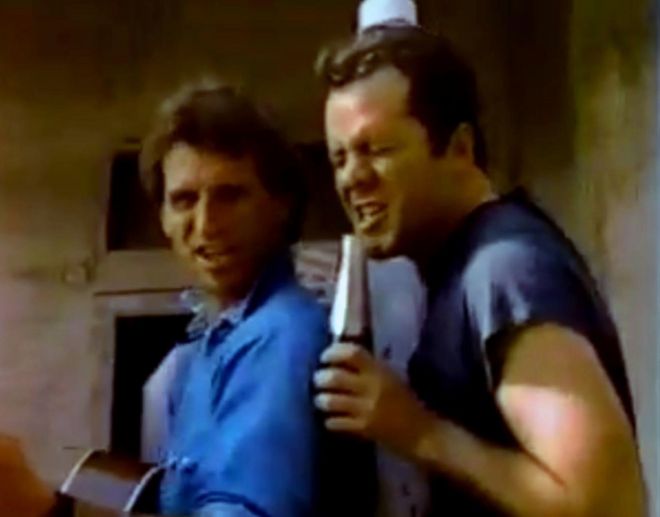 What do Keanu Reeves, Ben Affleck, Brad Pitt, Wesley Snipes, and Bruce Willis have in common? They’ve all starred in commercials en route to becoming some of the biggest names in Hollywood. Check out these five vintage commercials and see for yourself how far they’ve come.

Long before Keanu Reeves was the one in the Matrix films, he must have worked his share of dead-end catering jobs. Maybe that’s how he scored this Corn Flakes commercial – where he’s playing the world’s most excited caterer. Watch him dance up a storm, setting up bowls of Corn Flakes for… rich people? What’s really going on here? He’s setting up literally hundreds of bowls and boxes of cereal in what looks to be a fancy banquet hall. Are we to assume that these rich folks just really like their Corn Flakes? Or is it a much more sinister, Society-esque situation, and Keanu is getting the room ready for a depraved orgy of Corn Flake based “shunting”? I guess we’ll never know. He looks mighty worried about getting caught though, so I’d say it’s safe to assume the former.

Picture this: It’s 1984, and a fresh faced Ben Affleck receives a wrong number on his car phone – it’s a sexy lady looking to order a chef’s salad from Burger King. Why she doesn’t just chop up some iceberg at home is beyond me – salads at Burger King in the 80s weren’t exactly a gourmet meal.

This is where things get even more incomprehensible. Obviously, Affleck is going to grab some take-out and deliver it to this nice young lady, but when he arrives at her door his car phone rings again. This time when he picks up, it’s his father – but alas! He left the salad on the doorstep and the secret caller opens the door to find it delivered all by it’s lonesome – letting her cat out in the process. Affleck gives one of his signature shrug-smirks, and just tells his Dad he’s on his way home. What?

To make things even more confusing, the tag-line is “Sometimes, you’ve gotta break the rules.” What’s the rule here? That you should deliver food to random women and then try to sex them up? And breaking the rule means going home to your father? Uhhhh, what!? Personally, I want to know happened to that cat. What kind of adventures did it get up to? Or did it just maul Affleck in the car – effectively stopping Gigli from ever happening?

One can only dream.

No product was safe from getting a song-and-dance commercial in the mid-eighties. From chocolate bars, to candy, and now… wine coolers? Yes, in a bid to both appeal to porch-drunkards and music fans alike, a pre-Blind Date Bruce Willis belts out an enthusiastic ditty about how wet and dry Seagrams Golden Wine Coolers are. My favourite part of this one is when he tries to get the dog to drink some, but is shot down cold by the bitter canine.

“Seagrams Wine Coolers: not even your dog will drink it!™”

Brad Pitt might be fighting zombies in World War Z right now, but back in 1989 he was fighting something else entirely… a fever?

Yes, Brad and some bros are having a great time – possibly on their way to the beach – when they are struck down with a killer fever, and the only possible way to recover seems to be shoving more salty snacks into their gullets. Luckily, they turn their empty Pringles can into a makeshift periscope and spot a car full of friendly women with plenty of chips to spare. Apparently they’re eating some kind of helium or cocaine injected Pringles, because these special chips whip them into a high-pitched frenzied Pringles party. I’ve never seen anyone this excited to eat a potato chip in my life.

I’m not entirely certain that I haven’t picked up this fever they’re speaking of, because watching that commercial felt exactly like I was having a fever dream.

Wesley Snipes worked almost exclusively in commercials before getting his big break in early film roles like Wildcats and Streets of Gold. Here’s one of his more existential commercials, this time for Levi’s Jeans. Unfortunately the only version of this commercial on YouTube is a parody, but it’ll do the trick.

As you can see, we open on a picturesque city alleyway- back-lit by the morning sun. Meanwhile, some kind of street-party is going on – but where’s Wesley? He’s on his way, as happy as ever, when the wind blows his hat off – this is of course evocative of the futility of modern living. While Wesley hunts for the ever elusive hat (or is it happiness?) the always-out-of-reach party rages on. Suddenly, we’re in the desert. Our group of friends are trying to break through a plastic barrier of some sort – but they can’t seem to make it through without Wesley’s help. Wesley returns, and meets up with the group – only to ascend with them into a tunnel of light, in a stunning twist that reveals they’ve actually been dead all along and they’ve finally made through heaven’s gate.

Either that, or they just really like the way those Levi’s hug their butts – maybe I’m reading into this a little bit.

The Concretes' Self Titled Antidote to Indie-Rock Cynicism