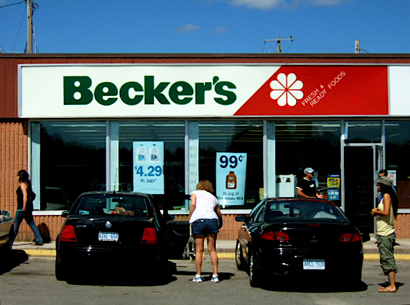 Update: some photos in the following article were originally scanned and published by the great CollectingCandy.com – they have now been noted and linked – our apologies.

That I’m sitting here, getting ready to write a sizeable post about candy probably comes as no surprise to anyone who truly knows me. In High School, I visited Bad-Candy.com religiously and loved seeking out new candy – the good, the bad, and the obscure or outrageous. Today, I won’t be taking a look at anything too weird – sorry, no Indy Dedos to be found here. This post is more of a loving dedication to the candy you rode your bike down to Beckers to get – back when a two dollar bill and some NES games could keep you hopped up on sugar and occupied for the majority of your weekend. Let’s go! 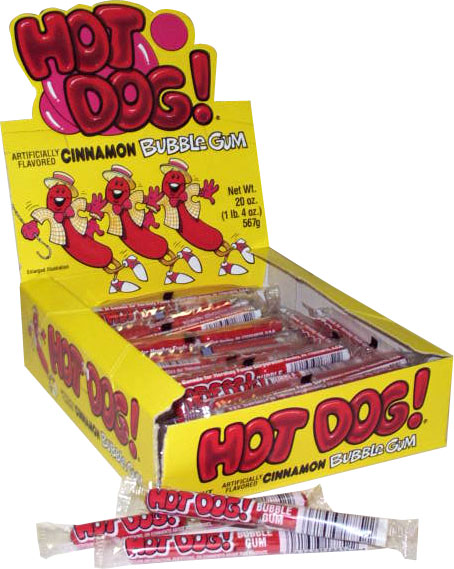 I don’t know why, but as a kid I loved these things – possibly because they came with two over-sized pieces of gum in each package, allowing for easy rationing. I went to the store to buy them more than I re-rented Stay Tuned – and let me tell you, I rented that damn movie about every other day. In hindsight, I think Hot Dog! gum may have actually been my first ever experience with cinnamon flavoured confectionery. Just two days ago at work, I demolished an entire box of Hot Tamales by myself – so for that, I guess I have Hot Dog! gum to thank.

As a kid, I used to go to Dixon’s Book Store to buy comics from the 25¢ bin. I was never a huge comic book guy, but for a fistful of quarters I could pick myself up a good chunk of offbeat reading material – I loved the oft-forgotten series Shatter, for example. Like most kids, I also loved perusing the advertisements for mail-in doo-dads and full-page candy spreads. In my mind, Bonkers seemed to pop up in pretty much every comic I had. Good candy, too. Bonkers are not unlike Starburst, only bigger – probably somewhere around the size of a piece of Bubbilicious gum. Apparently this similarity lead to enough gum-based confusion that Bonkers actually said in their commercials “Some folks think Bonkers is gum!”. At this point, a giant piece of fruit crashes through the ceiling, crushing them into what I can only assume is a fatally tart death. That’ll learn ’em for thinking Bonkers is gum.

Holy shit, this commercial is unreal. What is even going on here? “I start at the top, and work my way down”? How else would you eat an Astro Pop? Were there kids everywhere, eating their Astro Pops from the bottom-up, like idiots? “I’ve got one pop for me, and one I’ve just found”? Why is this commercial telling children to eat candy they FOUND – presumably on the ground? The one thing I remember most about Astro Pops, was how sharp the point would get as you ate it. No wonder the jingle says “Once you start, you’re unstoppable!” Yeah, because you have what basically amounts to a playground shiv. Recess, here you come. 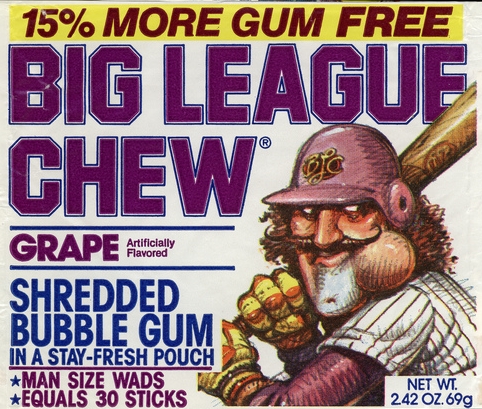 Nothing says “childhood” like pretending to get mouth cancer with fake shredded tobacco! Big League Chew was actually invented by Portland Mavericks pitcher Rob Nelson – and pitched to the Wrigley Company by New York Yankee player Jim Bouton. So yes, you really were in the big leagues when you bought Big League Chew! Is it disconcerting to anyone else that “Man Size Wads” didn’t raise any eyebrows at Wrigley’s design meetings? I’m pretty sure they dropped that unfortunate phrase faster than the Miami Dolphins dropped Chad Ochocinqo. 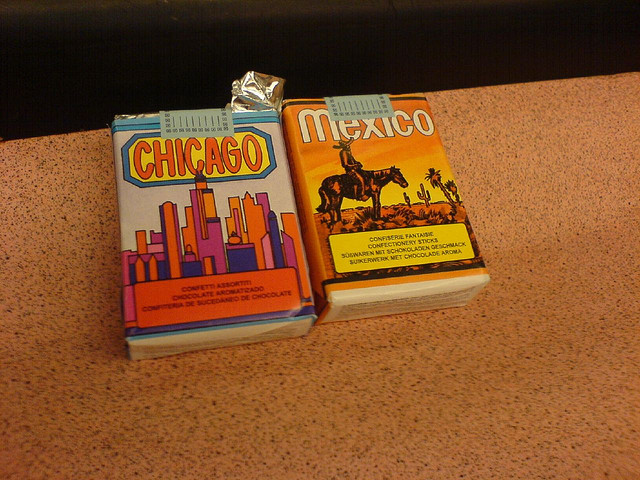 Speaking of candy pretending to be a very adult pastime – Chocolate Cigarettes! These packages pictured above are literally the ones I remember eating when I was young. I actually find it weird that these were still in major circulation through the early 90s.

For some reason the Chicago packages reminded me of the Delaware gag in Wayne’s World – don’t as me why, I guess I was always as geographically stupid as I am today. Chocolate Cigarettes usually came wrapped in paper, to make them look as much like the real thing as possible – and also to provide a terrible experience for any candy eater too eager to check before chowing down. Some say the candy was originally manufactured by tobacco companies themselves, in an effort to turn children into smokers as soon as possible. This lead to many countries actually banning the products – though some still sell the product cleverly disguised as “Candy Sticks” – Popeye, I’m looking in your direction, you smooth criminal, you.

Hi-C Ecto Cooler is such a seminal touchstone for so many kids my age, I had to include it on my list – regardless of the fact that it isn’t really a candy, nor a snack. If you haven’t already read the incredible Ecto Cooler bible from X-Entertainment (currently the site exists as Dinosaur Dracula), then you seriously need to familiarize yourself with the crazy history of the drink.

Originally a tie-in for the animated series The Real Ghostbusters, the wildly popular tangerine and orange flavoured drink actually outlasted the show itself. It was discontinued over a decade later – around 2001 – but intrepid internet detectives snooped out a new Hi-C flavour with the exact same ingredients called Shoutin’ Orange Tangergreen. Unfortunately, this iteration of the classic ghostbustin’ drink was discontinued as well. BUT THEN a new release called Crazy Citrus Cooler was revealed to – sensing a pattern here? – contain the same ingredient list. Guess what happened next? In 2007, yet another discontinuation! Currently, no version of Hi-C Ecto Cooler exists on shelves, but knowing that Hi-C seem to get themselves off with their game of Hi-C-giveth-and-Hi-C-taketh-away, I don’t think we have seen the last of the little drink that could. 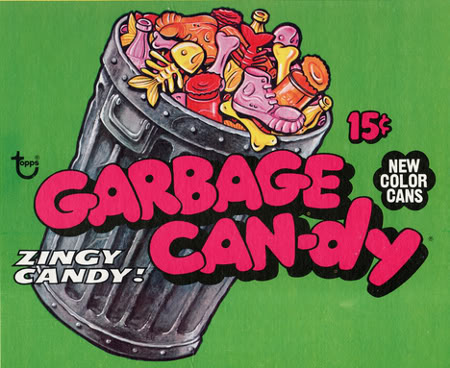 Get it? Garbage CAN-dy? This particular candy played off the delightful idea that eating garbage is fun! Who wouldn’t want to eat cartoon fish-skeletons, empty tin cans and and discarded Converse Chucks? These were produced by Topps, and bear quite the resemblance to their own line of Wacky Packages. Other than coming in a tiny little garbage can, the candy itself was your average Sweet Tart-esque treat. Just in the shape of garbage, because kids love garbage, right?

What is there left to be said about Nerds? Well, for one, how about taking a look at how goddamn adorable they were? Just check them out – parachuting, skateboarding, surfing, wearing party hats and capes. These little dudes were just like you! They could do anything if they set their minds to it – even despite the fact that their tiny body type literally lends itself to none of these activities. How’s that for a life affirming message on your candy box? It’s for this reason alone – one can only assume – that they were named “Candy of the Year” in 1985. That, and I guess they tasted pretty good, and came in an inventive partitioned cardboard case as well.

For a long time, I thought that I had dreamed Punkys up. No one I tried to describe them to, aside from my brother, would remember them. It probably didn’t help that I couldn’t remember the candy’s actual name. “You know, they were small, and round, and had all these different faces on them!?” I’d ask, to no avail. Eventually, I remembered the name and discovered that they certainly did exist – and if I’m right about their existence, I’m probably right that these were fuckin’ delicious. They had the most specific texture to them, not too grainy but not too chalky. Plus, they were punk candy, and that’s just awesome.

If Nerds are the #1 most adorable candy mascot ever, Everlasting Hot Gobstopper‘s titular character must take second place. I like to imagine they’re singing a killer barbershop quartet number about how they’re getting ready to burn the hell out of my tongue. They’re probably just killing the harmonies on it – there’s 10 of them! How many other candy mascots put together a 10-piece arrangement, even though you’re getting ready to murder every single one of them with your teeth? And look at those flames! A candy so hot, they have to tell you at least twice that they only get hotter the longer it takes you to eat them. Adorable, talented, and bad-ass, Everlasting Hot Gobstopper is a true candy triple-threat. 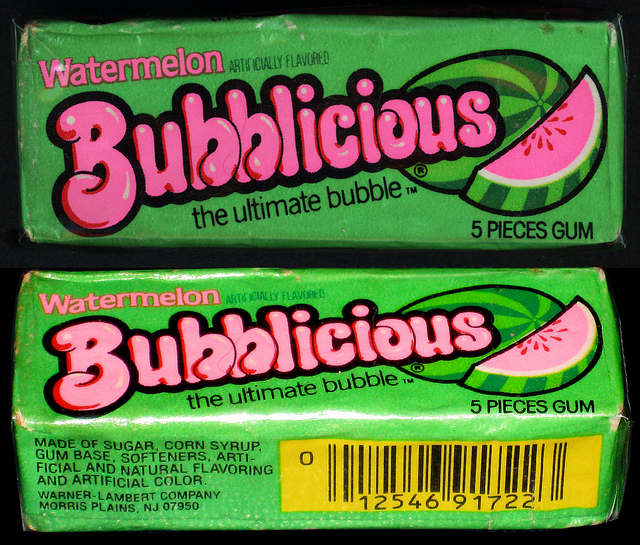 Bubblicious comes out of the gates strong, with the claim that they create “the ultimate bubble”. A claim they were so satisfied and proud of, they even trademarked it. And you know what? It was the ultimate bubble. Bubblicious gum produced such an ultimate bubble, that no one seemed to care about the gum losing flavor and gaining the consistency of a ball of old rubber bands within seconds of entering your mouth. You could blow the ultimate bubble! Bubbles so big, you thought they’d fully engulf your face and head, lifting you to the skies above to embark upon some kind of awesome bubble gum themed adventure wherein you’d defeat the evil king of Bubbleopolis. Or maybe I was the only one who thought that, I don’t know. Leave me alone. 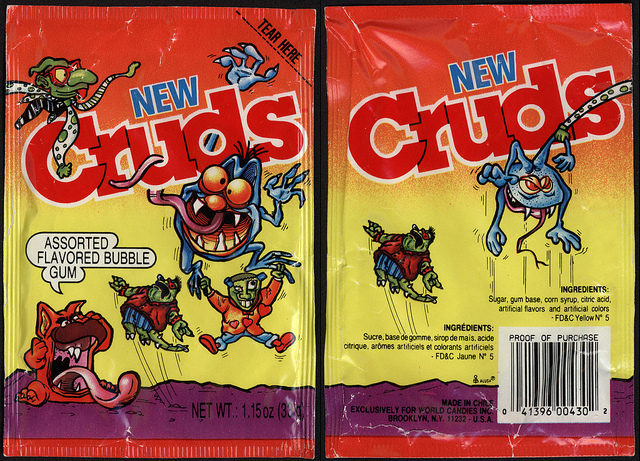 Looking to usurp Garbage Can-dy as the grossest candy on the market, Cruds stepped into the arena. With characters that looked like Nerds who got dipped into toxic sludge, Cruds came in a package that held a strong resemblance to Pop Rocks. If you ever had Gold Rush gum – the stuff that game in a cute little gold sack with a rope-tie – then you’ve had Cruds. I imagine all the rock-sized gum came off the same assembly line, just sprayed with some extra colouring. If only Little Mikey had stuck to Cruds instead of Pop Rocks, maybe he wouldn’t have had met a sad, candy-related fate.

Honestly, did anyone actually like Nik-l-Nip? Created in the early 1900s, Nik-l-Nip were named after their price – a nickel – and the act of nipping off the top to get to the sweet, sweet nectar inside. Much like Candy Cigarettes, these were hell for children who didn’t realize the juice was encased in gross wax. Apparently, kids used to actually chew the wax like gum after ingesting the juice.

Top 5 "Before They Were Famous" Vintage Commercials