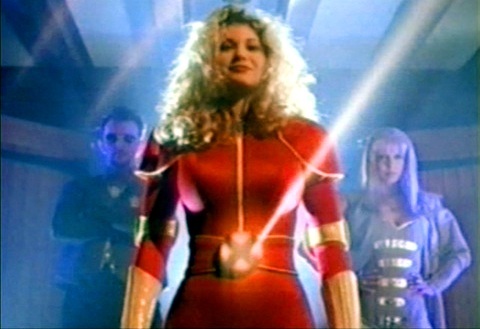 With the release of Zack Snyder‘s hotly-anticipated Man of Steel today – which some are calling “a soulless, overblown bore” while others claim “the action is plentiful and thumping” – I thought it’d be the perfect chance to take a look back on some superhero adaptations you may have forgotten even existed.

From the multiple attempts at bringing Captain America to life, to Billy Zane in purple spandex, check out our top 10 list of must-see bombs and overlooked gems below!

After purchasing the rights to Fantastic Four in 1986, German producer Bernd Eichinger struggled for years to obtain the budget to produce a film based on the hugely popular comic series. With the rights set to expire in December of 1992 – and that date fast approaching – Eichinger teamed up with Roger Corman and New Horizon pictures in September of 1992. Armed with a budget of about $1 million, they set out to produce a Fantastic Four motion picture on a schedule of just over 20 days. Some claim the picture was never meant to see the light of day, but with official posters created and previews screened in theaters and on Roger Corman’s Carnosaur VHS tapes, the word got out and Fantastic Four fans got excited. As you can tell from the trailer above, it’s a pretty low-budget looking movie – the human torch in particular looks pretty silly – but it’s not without charm.

From Robert Townsend – creator of the criminally underrated comedy Hollywood Shuffle – came The Meteor Man in 1993. Often overlooked and forgotten, this flawed superhero comedy is definitely worth re-visiting – even if just for the who’s who of talent involved in the production. Check out that trailer, it’s stuffed with hilarious actors and comedians. At the time of release, The Meteor Man received mostly lukewarm reviews. Those looking for a dud of Leonard Part 6 proportions though, should look elsewhere. The Meteor Man could have been something great, but from my memory it had some pretty solid laughs despite being generally over-stuffed with ideas.

Just one year later, Damon Wayons would try his hand at creating a comedic superhero with Blankman – directed by Mike Binder and co-written by Wayons himself. Similarly, Blankman recieved mixed reviews from critics while audiences didn’t exactly flock to the theaters to see it. Over time, Blankman gained a bit of a cult following through TV airings and home video releases – maybe due in part to Jason Alexander showing up as an angry, wheelchair bound boss. I remember seeing this on video when it was released, but I have no distinct memory of enjoying it or not.

Okay, so Generation X was a made-for-TV movie that aired on FOX in the mid-nineties, but it’s still worthy of the list. Directed by Jack Sholder – yes, Nightmare on Elm Street 2‘s Jack Sholder – Generation X adapts the X-Men spin-off series of the same name and follows the exploits of some early shenanigans at  Xavier’s School for Gifted Youngsters. I’d definitely watch this, if not just for the rush of nostalgia I got from that FOX logo on the trailer linked above. Talk about a flashback!

While not the first effort to bring Captain America to life – more on that in a moment – this 1990 adaptation was the first time ol’ Cap’n made it to the big screen. Directed by Albert Pyun – whose name you’ll probably recognize from such action flicks as Cyborg and Nemesis – Captain America‘s release was delayed multiple times before sauntering into international theaters with a sigh. Back in North America, the film saw a 1992 release on home video and cable television.  Starring Matt Salinger – of Revenge of the Nerds fame – Captain America was critically trashed upon release, being described as not “merely wrong for kids — it opens in pre-war Italy with a sequence in Italian with subtitles, and a machine-gun slaughter — it’s just all wrong”. Ouch!

As I mentioned before, the Captain America released in 1990 came about after two attempts to adapt the character on the small-screen – yes, Captain America the TV movie landed in your own living room in 1979. Loosely based on the comic books, this version starred Reb Brown as the titular superhero. This one was followed up by a sequel called Captain America II: Death Too Soon later in the year. Sounds like a sure-fire double-feature to me.

In 1997, CBS produced this Justice League of America television pilot based upon the DC Comic of the same name. The most interesting thing here is how the pilot has snippets of interviews with the main characters interspersed within the action – something you’d see grow more and more popular in mainstream television over the years. Unfortunately, the bad special effects, abundance of plot holes, and terrible costumes meant that we’d never get to see a Justice League of America television series.

Helen Slater got her first starring role in this oft-forgotten late-eighties entry into the superhero genre. Supergirl came out in 1987 – the same year that we saw Superman fly straight into the garbage with the release of Superman IV: The Quest For Peace. Supergirl racked up a handful of Razzie nominations, while simultaneously failing to rack up a considerable box-office gross. Oof, what a year ’87 was for the superhero genre, right? Anchor Bay recently issued a 138 minute Director’s Cut of Supergirl – packed with tons of extras detailing the interesting history of Supergirl‘s development and production.

This Silver Surfer short film was actually created by some college students to show off their CGI skills, but it’s worth a viewing anyway as an unusual piece of 90s Marvel curio. Film Junk has a little write up that is worth reading as well – turns out the director of this short ended up making his way to the director’s chair on a few low-budget films and subsequently The Surreal Life some years later.

Last, but not least: Billy Zane stars as The Phantom in this 1996 adaptation of Lee Falk‘s comic strip – the first attempt following only a handful of serials created in the 40s and 50s. I remember loving this movie when it came out, and it doesn’t surprise me that one of my favourite directors – Joe Dante – was originally attached to direct. Even having only worked on the script before leaving the project and receiving an Executive Producer credit, his influence on the film can still be seen on screen. It’s a zippy, entertaining Speilberg-esque  adventure flick – that while not remaining completely true to the source material, still has a lot of fun to it.

And with that, we’ve reached the end of the list. Hopefully you’ve found a few gems and notorious duds to curl up with this weekend after you check out Man of Steel.

Waxing Nostalgic: Koufax and the Curse of Vagrant Records