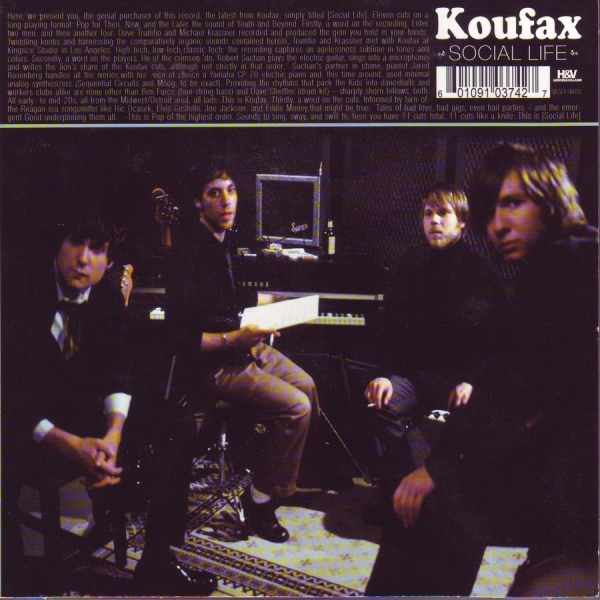 Waxing Nostalgic is an ongoing series of articles shedding light on albums gone unappreciated or overlooked for too long.

There was no worse time to own an album with the Vagrant Records logo on it than the early aughts. With Pitchfork dishing out sub-4.0 grades to everyone from The Get Up Kids to The Anniversary, the dreaded “V” was a mark of death for any self-respecting indie-rocker. So when Koufax released Social Life to critical acclaim – yes, even garnering a 7.2 from the taste-makers at the Big P themselves – I was ecstatic. Finally I could envision achieving crossover popularity within my circle of friends who usually turned their noses up at my Saves The Day and Hey Mercedes albums.

Dropping one year after The Strokes‘ Is This It catapulted mainstream interest in vintage-aping rock-and-roll over the marquee moon, Koufax‘s sophomore album Social Life instead cribbed a parallel set of influences. Drawing in equal measures from songwriters like Elvis Costello & The Attractions, Ric Okasek and Joe Jackson, Social Life skitters through 11 tracks of carefully orchestrated “Reagan-era” (according to the cover-text) new-wave pop.

I want to stress that last word of paragraph number two: pop. Koufax are through-and-through a pop band. With the second-wave of power-pop worshiping emo breaking way for the infinitely more terrible third-wave, bands like Koufax were offering lovers of the hook a save haven.

Initially, Social Life might catch your ear by way of some infectious piano-based melodies – but lead singer Robert Suchan possesses the songwriting chops to keep you coming back, even after the initial sugar rush subsides. The one-two punch of openers “Let Us Know” and “Break It Off” get the record off to a bouncy and memorable start. Ben Force‘s punchy bass lines in particular propel these 11 tracks through a maze of horn flourishes, staccato guitar riffs and upbeat piano solos.

While Koufax may never reach the dizzy energy of 2000-era bands like The Strokes, Hot Hot Heat or The Hives, it’s for exactly that reason that Social Life plays so well – even after eleven years. Texturally, Social Life might not offer a wide variety of sounds per se, but the amount of meticulous detail that they’ve been rendered in is thoroughly impressive. Pitchfork‘s main criticism of Social Life was that it settles “all too quickly into a mellow, wineglass-in-hand strut”, which is an absolutely fair issue. Personally, I’ll always have room in my listening rotation for a bit of wineglass-in-hand strut, so I don’t take issue there.

Despite the level of quality songwriting contained within the trendy, black-and-white packaging, Social Life didn’t catapult Koufax towards any major fame and fortune. Maybe it was the dreaded “V”, or possibly the over-saturated marketplace – I don’t know. There certainly was an anti-Vagrant Records trend going on – despite the label releasing some great albums from people like Paul Westerberg and Rocket from the Crypt. Look no further than Pitchfork’s review of the album, which claims the “Vagrant rectangle […] likely throws it directly to the bottom of most critics’ review stacks”  – but then goes on to admit that the album is good “enough for me to risk keeping a spine emblazoned with the Vagrant logo amongst my other CDs”.

For a seventeen or eighteen year-old kid like myself with no anti-Vagrant leanings though, Koufax‘s Social Life offered the perfect place to shed some angst off of my pop music addiction and trade it in for something a little more dignified. And luckily for us, they put out two more fantastic – and criminally underrated – records in 2005 and 2008. Hard Times are in Fashion ratcheted up the energy a bit, while also expanding their sonic palate with some pedal-steel. Strugglers followed three years later, and brought a tighter focus to the horns and new-wave swagger. Both records deserve to be heard by more ears, so seek them out if you like your pop music smart, clever and infectious.

Don’t just take my word for it, here’s some more hype for Koufax‘s Social Life:

“The overall effect is like a less-histrionic XTC emerging from a garage with an upbeat Ben Folds Five.Social Life is a distinguished piece of rock archeology with enough passion to suggest that Koufax may have a part to play in the unfolding tapestry of distinctive voices in the rock world.” – Allmusic.

“Koufax seem to have all the right ingredients in place: crisp songwriting, charismatic swagger vocals, punchy rhythm, horn-embellished riffs. […] The quartet is confident enough to list their most obvious heroes right on the cover– I’d already called Joe Jackson and Elvis Costello before squinting through the fine print.” – Pitchfork.

“Koufax may claim Joe Jackson and Elvis Costello as their heroes, frontman Rob Suchan’s matter-of-fact, half-sung/half-talked vocals remind me more of those of indie rock icon Stephen Malkmus (well, if the Malk could be bothered to ever actually push his vocals to the front of the mix). And chalk the other part up to intelligent lyrics, adept storytelling, and a willingness to subvert rock conventions.” – PopMatters.