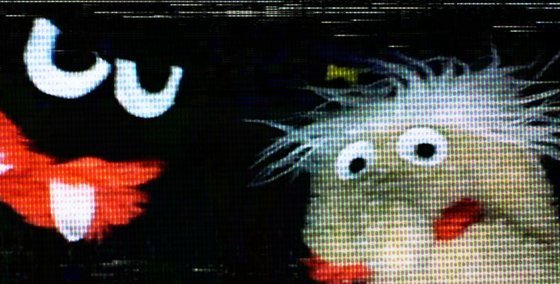 Horror Remix has screened here in Toronto (at The Royal) only twice so far – the first with Halloween and then last month with Beast. If you weren’t at either of those wonderful screenings, you might be scratching your head, wondering what exactly a Horror Remix is.

Well, for the uninitiated, the series began as nothing more than VHS mixtapes to be played at parties in Dallas, TX. Soon after, they made the jump to the Alamo Drafthouse, and the rest – as they say – is history. Thanks to the fantastic programmers at The Royal, the aforementioned remixes made their way to Toronto.

Each remix contains about two hours of chopped up horror movie insanity (culled from three main features and a bevvy of other bits-n-pieces), as well as two puppets named Cheesecake and Thunderclap (voiced by creators Edward J. Anttila and Alecia Fryman) who riff on the condensed horror films.

I left both of the previous Horror Remix events with a busted gut and a handful of awesome movies to watch in their entirety; I divide my life into pre-Hollow Gate viewing and post-Hollow Gate viewing now, and you seriously need to see Devil Dog: The Hound From Hell ASA effing P – if you haven’t already.

Thankfully, the event returns to the royal on Friday, January 24th. Horror Remix: Don’t looks to chop up the best bits from the over-saturated market that is the Movie Titles That Include the Word Don’t genre. For more information, check out The Royal’s website, and keep your eye on the Horror Remix Twitter account as well.