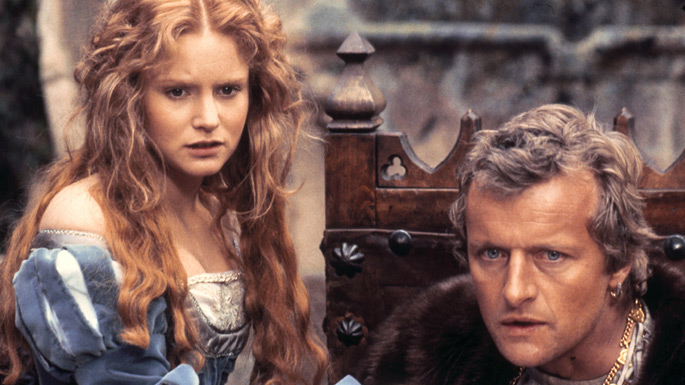 The original poster for Flesh+Blood stated that the film was ‘a mirror of our time’. Not surprising, the Paul Verhoeven I am familiar with is no stranger to social commentary – even with films like Starship Troopers. So it’s not surprising that this film offers no actual moral stance on its violent, often misogynistic subject matter. But does that stance preclude it from criticism of it’s amorality on the basis that it’s just ‘holding a mirror up to society’?

The film opens with a group of medieval mercenaries tasked with regaining control of a city in Italy for its rightful ruler, Arnolfini (Fernando Hilbeck), after a coup. In exchange they are granted the right to basically rape and plunder the hell out of the city once Arnolfini is reinstalled. They readily take the city back, but are quickly cast out by Arnolfini and left with nothing. Martin (Rutger Hauer), the group’s de facto leader, vows revenge on Arnolfini and exacts it by kidnapping Agnes (Jennifer Jason Leigh), Arnolfini’s daughter-in-law-to-be. Martin then inducts her into the group by having a few of his men hold her down while he rapes her. Oh, did I mention that Martin is essentially the hero (antihero?) of the film. Yeah, that’s what we’re dealing with here. The film then becomes a fight for her hand between Martin and Steven (Tom Burlinson), Agnes’ intended groom. But who is in control of her destiny here? Is it the sensitive, progressive, science minded Steven? Is it Martin, the callous warrior who blindly follows his religious avatar (a statue of St. Martin, his patron saint)? Or is it Agnes herself, whose greatest (or perhaps only) power is sexual manipulation? 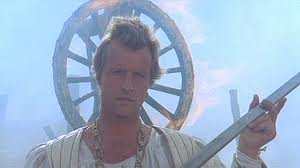 St. Martin, the patron saint of being a huge dick.

The movie employs all of tropes that we’ve seen in Verhoeven’s subsequent work; brutal violence, rampant and unsettling nudity (who would have thought that there would be a movie in which you root for Jennifer Jason Leigh to put her clothes back on?) and moral ambiguity. There is a scene in which Agnes and Steven first meet and fall for each other that takes place beneath two mutilated corpses hanging from a tree. It’s so sweet, you guys.

All in all, this movie is as watchable as it is repugnant. Though I can’t definitively say I enjoyed this movie I was never bored. It’s themes of religion versus science and man’s futile attempt to control his reality are well laid out and executed. And I suppose that’s what makes Verhoeven such a polarizing and provocative filmmaker. He’s not forcing his own agenda, but rather asking his audience to bear witness to humanity’s darkest compulsions and draw your own conclusion. And in that respect I believe he succeeds in what I can only imagine was his intent. And I guess that’s why his representation of brutality is so much more pointed – and dare I say responsible – than that of the torture porn directors of today.

Yeah, I’m looking at directly at you, Eli Roth.

Horror Remix Returns To The Royal In January With "DON'T!"