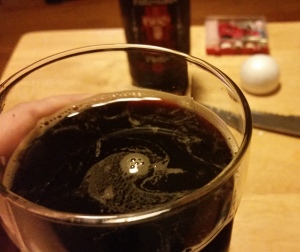 Welcome to the first in what, I hope, will be a series of many DrinkAlong DYIs… A “do-yourself-it” project you can do at home!

This project involves sawing, cutting and poking with sharp objects and should only be attempted under strict adult supervision.

It seems like an eternity since the 88 second teaser trailer for Star Wars: Episode 7 – The Force Awakens was unleashed upon us, but in reality it’s only been twelve days. A lot has been said and analysed over the past two weeks, but I think we can all agree on one thing. The break out star of the trailer was a snappy, little fellow that people have been referring to as “Ball Droid”. 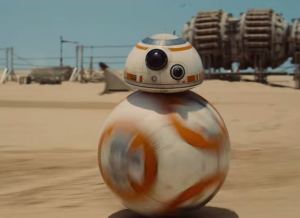 Ball Droid appears on screen for two whole seconds. Never has so much been said over two seconds of footage since Zapruder took his Bell & Howell to Dealey Plaza. I can’t blame people. Ball Droid is familiar and weird and new and round and chirpy. He rolls. How does his head stay on? Is his body like that or does he have some sort of transformer-like ability? Is his head just surfing that ball because of some hilarious accident? Cripes… how BIG is he???

Love him or hate him, Ball Droid is here to stay. I mean, we think he is… We don’t even know his NAME yet, let alone if he’s in the movie for… oh… let’s say THREE seconds. On a side note, I wanted to start calling him T0-0Ts, but that was quickly (and firmly) rebuked by friends and the internet community at large.

Here’s where the fun begins. In the surprising absence of a Disney/Lucasfilm merchandising cash grab, I’m going to show you how you can have your own Ball Droid, just in time for the holiday season. 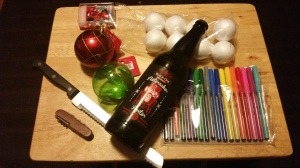 THINGS YOU WILL NEED:

Note: With the exception of the Porter and knives, these can all be purchased at your local craft or dollar store for under 4 dollars.

STEP ONE: Open Up the Nutcracker Porter.

This is where a Swiss army knife really comes in handy.  If you don’t have one handy, call up that friend from college who can open a beer top with his eye socket. You know him.  He’s the one on Facebook who’s started posting pictures from his high school days and no one comments on them because it’s kinda sad.

You may get a hint of molasses on your first sip. There’s a nice cinnamon hiding in there, too. I find it dry, nutty and light for porter, but it’s very tasty for the season. It’s only 5.8% ABV, so that will work out nicely for step three. 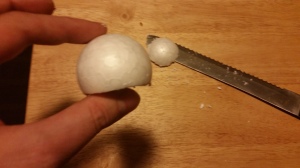 You want to cut about 1/4 off the top of the ball. Or bottom. Or sides?  It’s a damn ball, you know where we’re going with this.  You want it to look like the head of an R2 Unit. Use the serrated knife on this and saw, don’t slice. Depending on the grade of the foam, you could rip it to shreds if you’re not careful. Don’t do this over your beer, either. This sucker will flake like crazy.

Notice the mild carbonation and malty kick? It’s nice, isn’t it? Can’t you picture enjoying one of these by a roaring fire?  Black Oak Brewing Co. says to watch for hints of figgy pudding, but I’m not getting it. To be honest, I don’t think I know what figgy pudding tastes like. Figs? Is it figs? I’m gonna say figs. One thing is for sure, this is pretty smooth porter. Doesn’t linger too long on the palate, but very complex with roasted notes and hint of bitter chocolate.

STEP FIVE: Draw Your Droid Face on the Styrofoam Ball 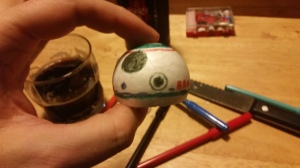 This can be hard to get even, so start at the top with a bird’s-eye view and work your way down. You can use the picture above if you want it to be spot on, but be creative! Who says there aren’t hundreds of Ball Droid’s in this new universe? And who says that Disney may not take the Instagram you posted on-line of your Ball Droid creation and use it to create a whole new character with which to make millions of dollars in commercial licensing fees? So let your inner McQuarrie out. Just be careful because that ink will come off on your fingers.

STEP SIX: Damn, This Porter Isn’t Half Bad, Is It?

Did I ever tell you about the time I was at the Wavelength weekly live music series and some weird, old hippy woman gave me a rock that she insisted had magical powers? She made a really big deal about it. Anyway, I gave it to a buddy and he won two hundred bucks at Casino Niagara, so who knows?

STEP SEVEN: Hollow Out the Head

Using a small blade or pocket knife, hollow out the bottom of your Droid head. Technically this should be step four, but you’ve been drinking and I won’t judge you. If your Christmas ornament has a little nub on the top (yub-nub?), just hollow out enough that the head will sit flat. 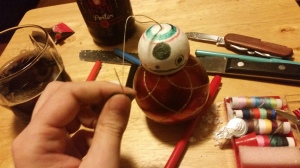 For this last step, use a needle and thread. Tie the thread to the noose on the Christmas ornament.  You know what I mean by “noose”, right?  It’s that string loop that you use to hang the ornament from your tree. I have no idea if it’s called a noose or not… it just feels right. Feed the needle upward into the Droid Head. Try to get the tip of the needle to come out right at the tippy top. Once it appears, SLOWLY pull the thread through with the noose attached. Some of the Styrofoam may come up with the noose, but just poke it back down.

None of this really matters.

Detach the thread from the noose and there you go!  You now have your very own Ball Droid for the holidays!

Hang him on the tree. Attach him to presents for family, friends or co-workers. Pretend that the two of you are scooting across the Jundland Wastes of Tatooine. 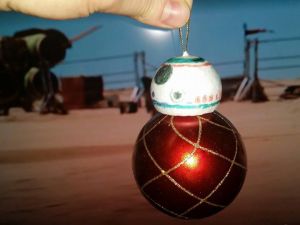 You’ve got a whole year to break out the old action figures and think up new adventures, so make the most of every moment! And make the most of the Nutcracker. You probably won’t find a better spiced holiday porter this season.

Episode 143 - Big Hero 6, This Is Where I Leave You & Christmas Spirit