I am Geralt of Rivia. The Elders call me Gwynbleidd. The dryads know me as the White Wolf. I am the Butcher of Blaviken. A slayer of monsters. A Witcher.

I am currently traversing the sewers of Novigrad with my ex-lover, the sorceress Triss Marigold, in a mission to clear the a safe pathway for the escape of prosecuted mages to Kovir.

Except… right now things are a bit on hold… I stand, with sword in hand, ready to continue our noble quest… but… Triss won’t fucking move out of a fucking doorway and, try as I might, I can’t seem to fucking jump or wiggle around her to fucking progress to the next fucking checkpoint to keep the fucking mission fucking going.

I save, menu out and reload. That seems to have cleared up the problem.

At least THAT problem.

The time to reload the game is ASTRONOMICAL by today’s standards… almost 3 minutes on some occasions. Between that, the frustration I feel at having my fluid progress interrupted in what is otherwise a fantastic story, and the niggling fear that it might happen again, there is enough worry in the back of my mind to keep me just shy of the suspension of disbelief zone.

Thankfully for The Witcher 3: Wild Hunt, I only last in that state for as long as it takes me to engage with the story again. The folks at publisher Projekt CD RED should be commended. Try as they might to outdo each other, the craft they’ve placed on their storytelling and level design consistently exceeds the sheer audacity of their gorgeous open world.

If you took the time to watch that clip above, take notice that even the trees respond to the real time weather changes. I’m 100% sure the trees in my backyard don’t even do that.

Here’s some perspective. This is what I considered to be ground breaking graphics when I was 10.

But that’s just fodder for another post about how we’re all slowly dying.

Sure, I’ve seen bugs and problems in the Witcher the likes of which are somewhat typical of other console games releases these days. I’ve had bodiless horses outside the Inn at the Crossroads composed only of eyes, a tail and hoofs. I’ve seen guards leap 10 feet in the air to walk over gates instead of opening them. I’ve whistled for my trusty horse, Roach, and had 4 clones of him appear. All fairly goofy stuff, but not usually game braking and nothing, in the grand scheme of things, detracted from what has been an enjoyable experience.

BUT… I did start off by saying that I couldn’t get through a section because the game was broken and then I swore a lot and then I had to reload and that took a long time… Yeah… I know. That sucked. But it wasn’t like I was pinned to the front of the TV or anything. I got up, had a drink of water, cleaned a bit. I “puttered about”, if you will. Truth be told, as immersed as I was in the game, while I was playing I also had a conversation with my wife, checked the weather for the week, booked a rental van and ate a sandwich.

I did all that, while as immersed in my video game as the current technology allows.

Now, let’s take that same scenario and look at what it’s going to be like in 2017.

If you were following E3 this month, or for any of the previous three years, would know that VR is on the way. That’s right… Virtual Reality. Or as William Gibson, the granddaddy of cyberspace, was quoted as saying just a few short years ago “that big thing that was coming that never actually happened.”

E3 was awash with VR demos. Everybody has one coming out. Microsoft has the HoloLens. Sony has Project Morpheus. Facebook now owns Oculus Rift. Samsung has the Gear VR. HTC has Vive. Google has Cardboard, which is a self-assembled VR rig… which… just screams Google, doesn’t it???

Nintendo, wisely, has learned from their last foray, but everyone else is pushing it, and it’s easy to understand why.

Since very early on, we’ve tried to “step in” to games. I chose the Law of the West above for a reason. It’s an example that 1) I am old and 2) that’s a third person shooter in 1985! A shooter where you play the main protagonist from an almost POV perspective while choosing the dialogue that moves the story forward. That’s basically Mass Effect with a wild west skin (and a better ending).

It’s story and choice. Those simple details that aid the player to be immersed in the environment and for some, me included, that’s the a special place of gaming zen. It appears that VR is setting out to conquer that niche of the market by actually placing you inside the game.

Yeah… it’s pretty much a Saw simulator… how could you not be hooked on that?  How could that not change EVERYTHING?

I’ll tell you how.

It isn’t going to work.

I don’t mean that it’s not going to work in that people won’t buy into the fact that they’re really piloting a star fighter, or they’re not going to want to interact with their town in Minecraft in three dimensions.

No, it isn’t going to work because it’s going to be buggy. And when things get buggy, we lose interest.

There used to be a time when you could buy a game and, take it or leave it, that was the game. What you got in the box was what you paid for and if you didn’t like it, you were out $50 bucks. Then, there was modding. Modding saw creative types enhancing their versions of computer games to cheat or to augment the experience. Then there was patching, which said that a computer game sold in a retail store might need some additional files to work on some systems.

Fast forward a few years and we have the X-Box. A marvel of gaming technology. You could hook the X-Box to the internet. And thus was born the first console game patch for Unreal Championship in early 2003. To my knowledge, this is the first time a game was changed on a console, post-release, to fix a problem with the original game.

After that, it was a slippery slope. A mere 12 years later, we don’t think twice about a game shipping with a “Day One Patch”, which essentially means “We, the developers didn’t finish the game in time so we put everything we had on a disc and shipped it out, but don’t worry, we’ll have it up and running if you download the files that MAKE IT WORK on the first day it’s playable to the public”.

Last year was horrible for it. We saw a lot of triple A games (which is shorthand for the Furious 7’s of the gaming world) that simply failed due to bugs. Assassin’s Creed Unity? Full of bugs. Halo: The Master Chief Collection, a pack of remastered games that practically reinvented multiplayer first-person shooting? The multiplayer didn’t work. Driveclub? Didn’t work. Call of Duty: Advanced Warfare on PC? Broken.

Sales of these games total in the billions of dollars.

There was backlash, of course. Gamers were fed up. Articles were written. People pledged, as I did, to never pre-order a game again. Obviously, though, the industry learned their lesson?

Try telling that to anyone who bought Batman: Arkham Knight for PC last week. You guessed it… it didn’t work. It didn’t work to the point where it had to be pulled from sale on Steam. That’s a triple A game from a major studio for a major license and it’s about as useless as Aquaman.

Yeah… I’ll throw down against Aquaman. 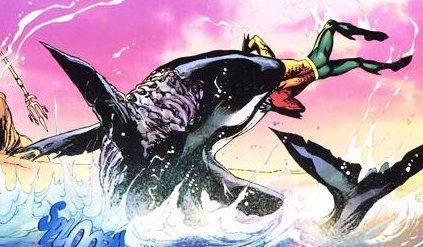 There’s a See You Next Wednesday joke in here… somewhere…

VR is about total immersion. Your eyes and ears are literally encased in gadgets to give you a full sensory experience.

Imagine slipping on goggles and headphones to find your sitting at a broad oak table in an inn. You can hear the sound of rain pelting on the windows behind a lute player who’s strumming the tune of an ancient ballad. There are flashes of lightning, illuminating the grizzled patrons over the faint light from candles on chandeliers made of deer antler and bronze. A raging fire in the hearth casts stranger shadows. You turn your head sideways to see your companion, a dwarf, who’s in the middle of a tale about goblins on the outskirts of town.

Thunder shakes the inn and you stand, declaring that you’ll rid the goblins from the woods. The innkeeper’s eyes meet yours and he raises a mug of mead and leads the crowd in a cry of celebration.

“Huzzah!” they yell as you make your way to the door, sword ready by your side.

It will literally turn what should be the greatest thing in gaming into a bad knock-off of a Twilight Zone episode… living the same moments over, again, and again and again.

So, I’m begging you… game developers… don’t give us something half-baked. Don’t give us a “sort-of” experience. VR is all or nothing. Buck your current trend. Get it right the first time and you’ll have not only a new paradigm for gaming, but billions and billions of our hard earned cash.

And, while you’re at it, maybe get around to fixing it so the games coming out for our two-year-old futuristic gaming consoles work on release, too.

Dead Battery is by Jeremy Schultz who is one half of the podcast DrinkAlong with Dave and Jeremy on Modern Superior.