I’m Jeremy from DrinkAlong.  You might know me as the drunker sounding one on our award-winning podcast, but if you knew me and Dave by sight, you’d pick me out of the crowd as the one with the beard. 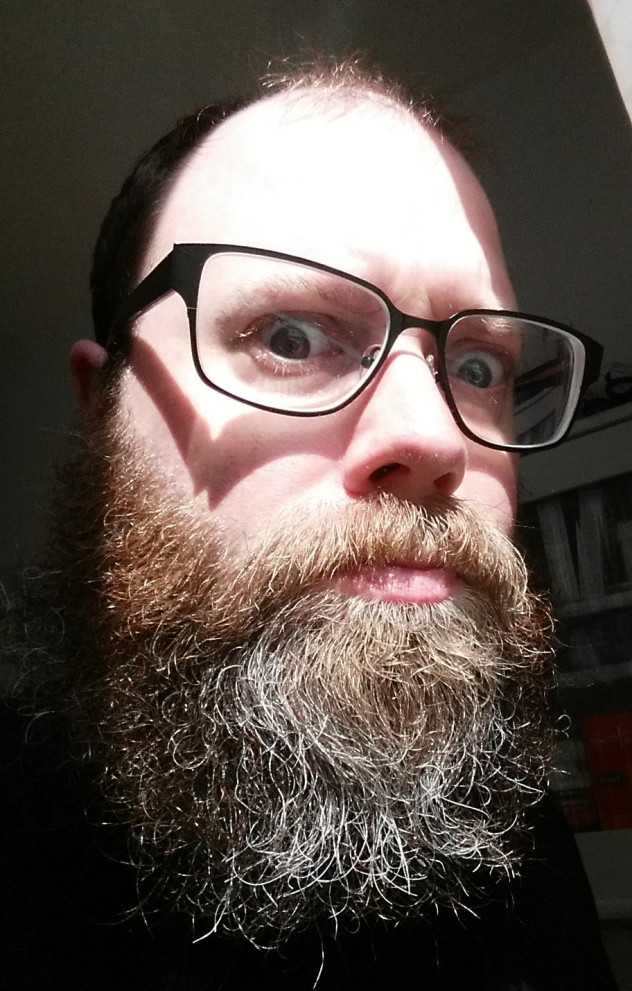 I watch you while you sleep.

That was before this morning.  Now you’ll need to distinguish me as the one with the glasses… unless Dave is reading… in which case I’ll take “the guy with no hair”, “the one with the pretty tush” and, once, “Rick Moranis after chemo”. Harsh words to hear from your building’s security guard before your first morning coffee.

The beard is no more. That’s right… I’ve shaved it off.  It’s gone.  To give you an idea of the size of the trimmings, I set it down next to my Mini-Pincher and she could snuggle with it. Birds were mad when I tossed it in the trash instead of off the back deck because that shit was an instant nest. So much weight was off my head that my posture corrected. 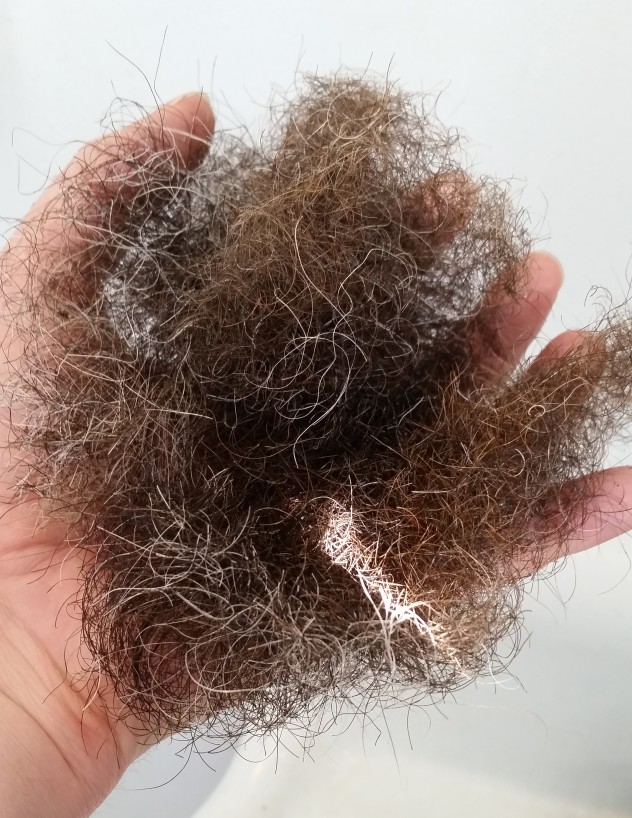 We were worried this little fella was going to shut down the podcast, although he did tell us which Modern Superior host was a Klingon.

So why did I do it? To be clear it’s not because of the recent “beards are going out of style” buzz I’ve seen popping up from time to time on my news feed. There seems to be a lot of articles like that now, ever since we solved global warming and racial injustice.

Anyway, here are my reasons.

1. Beards suck in the summer time.

My beard was strictly utilitarian. I usually start growing one on December 1st and keep it until the spring. The December 1st start date, in the past, was due to my involvement in the Movember movement. Since I didn’t participate in that this year, and since I didn’t have any Halloween costume to adhere to, I started really early.  The result, of course, is that my beard was longer than it usually was, earlier than it usually is. My rule of thumb is that I’ll shave once the temperature is 10 degrees Celsius or more for three concurrent days.  This year, I’m not sure it will ever be warm again, so I bit the bullet.

To give you an idea of just how beneficial the ol’ whisker scarf was, I just got back from a walk with the dog and I have what feels like third degree frostbite on my lips and neck.  It’s freezing out there. It’s 2 degrees.  In the subzero marathon that was the winter of 2014, with a beard I was good to go with only a couple of layers and a hat.  Now, without it, it’s almost Easter and I feel like Jack Torrance in a hedge-maze.

This is a stark contrast to a few years ago when I kept my beard well into July. And it’s not so much the heat, it’s the humidity. If you’ve ever been caught in a summer drizzle with a full crop of facial hair, it’s like wearing an itchy, wet sweater. Say what you will, winter downpours are fairly rare, and thus, fairly dry.

2. Since I’m bald, it’s literally the only thing I can do with my hair.

It’s the circle of life, or so I’ve been told by well-wishers, behind their curly locks and buzzed-down faux-hawks.

Once you go bald, a monthly ritual is striped out of your life (along with the daily ritual of looking in the mirror making kissy faces). What you save on shampoo and conditioner, you lose in trips to the hairdresser. I’ve joked that I don’t even need to sit down when I go to the barber now, and that’s legitimately true. Check out this text string: 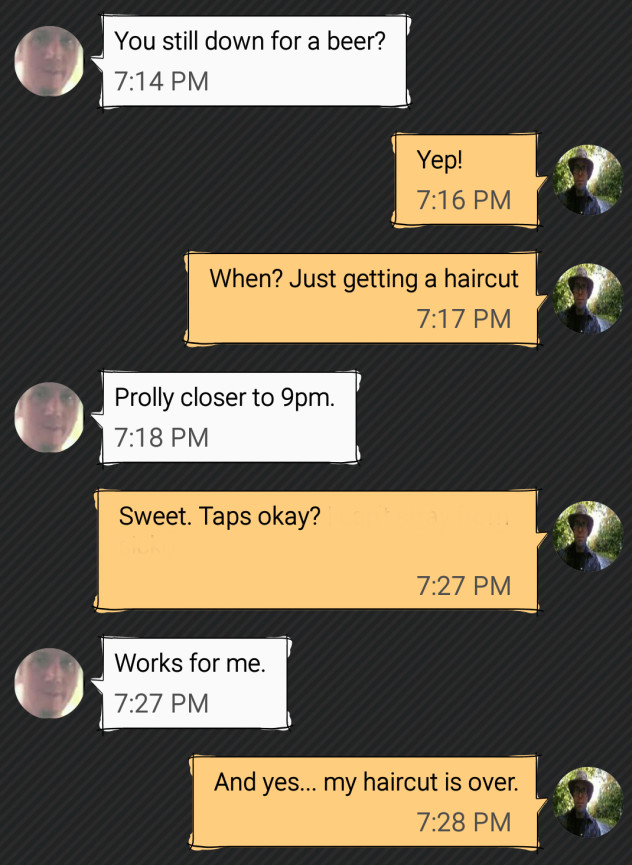 So my options in personal style are limited to what I can do with what god gave me, and that’s the ability to grow facial hair at a fairly advanced rate. And it’s fun, once year, to buzz the beard into a Motorhead style, then down to mutton chops, before going full Brazilian. 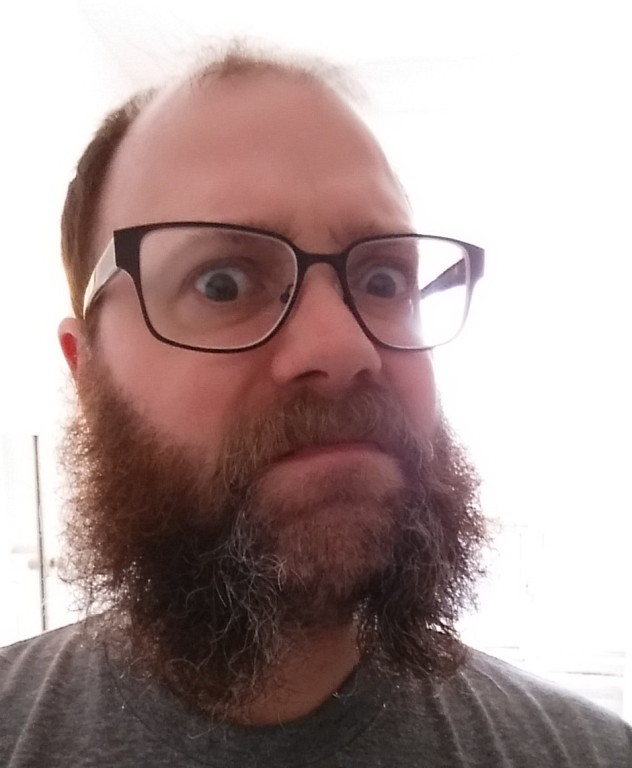 I’m reminded that I was never one to experiment with my hairstyle when I did have hair… When I was 13 my mother forbid me from getting my hair cut in the style of, wait for it, Dana Carvey. She thought it was too messy. On the other hand, she did forbid me from growing the rattail that all my friends were sporting in the early 80’s, so I guess we’re gonna call that one a draw.

3. Unless you’re a wizard, grey beards aren’t all that youthful.

About two years ago, as the ravages of time beat my body and soul into submission, I noticed one, solitary white hair gowning from my jawline. Cut to this year and I had some serious Chief Chirpa action going on in the “Van Dyke” area.

By the way, that last sentence can also be used to describe my love-life in college, but in a very different context.

Don’t get me wrong, I don’t fear getting older or getting a bit of grey hair and, let’s face it, where else am I going to get it?  But when it’s strung through your facial hair in a patchy fashion, it’s not as cool. It’s the difference between Gandalf and Radagast. Sure, both are cool, but… push come to shove… you’d probably trust Gandalf with your spare set of house keys and trust Radagast to show himself out.

My father used to have a beard back in the day.  When I asked him why he got rid of it, his answer was that once it starts going grey, it looked pretty grizzled. I always thought that that was a bad answer until you’re stuck looking at it in the mirror.  And sure, there are products on the market that allow you dye your facial hair… which sounds as gross as I’m sure it smells. Continuity wise, I don’t think I could get away with growing a full beard with spots of grey and then showing up at the bar with painted-in hues of youth the next day.

For more information on this, ask anyone who’s bought a toupee.

4. I’m tired of talking about my beard with everyone.

Every year I am constantly accosted by friends, relatives, and complete strangers who felt the need to comment on my beard.  The size, the length, the practicality, what OTHERS must think of it, what I think of it, does my beard have an opinion, how do I wash it, how do I dry it, where does the beard sleep, does the beard dream… constantly…

To the best of my knowledge, no one has ever walked up to someone else and said “Wow… nice smooth, shaved face! What does your wife think about that???”.  It’s the world’s worst ice breaker, and, in a choice of casual conversation between the weather or my beard, I’d rather talk about local sports teams.

Things reached a fevered pitch this week when I saw someone whom I haven’t seen in two years and, instead of catching up on a myriad of literally ANY FUCKING TOPIC, he talked about my beard for 15 minutes.

That’s a quarter of a goddamn hour.

All this not withstanding… citizens of the internet… you’ll get your chance to discuss it with me next year.

Rugged, not rugged. I love the English language.

It will grow back.

The Exorcist III, with Greg LeGros

Episode 158 - It Follows & Murder By Numbers