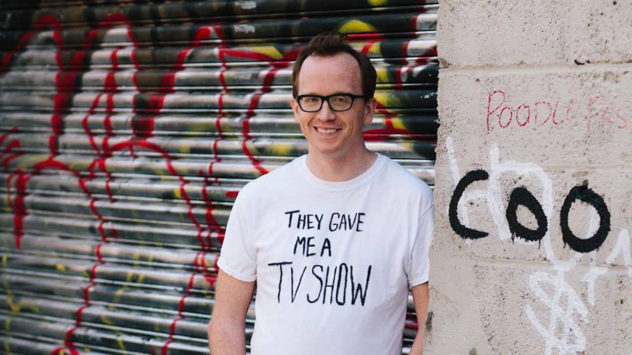 According to a Deadline exclusive, powerhouse director and producer Judd Apatow has attached his name as co-producer on Chris Gethard‘s off-broadway show Career Suicide.

If you know me in real life, you might know that (thanks to some close friends of mine) I was tipped off to Chris Gethard’s variety show The Chris Gethard Show and became thoroughly addicted to it. Like many of the show’s die-hard fans, the show also found its way into my life at a peculiar time; I spent a lot of Thursday nights alone in a sweaty basement, drinking beer and watching the show’s live-to-tape streams on YouTube. I felt like I had stumbled upon an alternate-universe Nickelodeon show (as my podcast co-host Greg had so aptly described it,) where the weirdos prevailed and it was OK to admit that you were struggling. Around that time, I was coming to a realization that maybe I was, in fact, avoiding dealing with my own issues with anxiety and depression in favor of succumbing to bouts of alcohol and isolation in the aforementioned basement. Again, like a lot of people, this coincided with my discovery of Gethard’s work and ultimately, his comedy and television show helped me come to terms with a lot of things in my own life.

OK, so this fun little news article has gotten pretty out there, but I suppose I’m trying to articulate how excited this news has me. I’ll defer to a quote from Gethard as posted in the Deadline article:

“People have expressed to me that making comedy about depression is insensitive. I vehemently disagree. We need to start laughing about this stuff, so maybe we can finally be comfortable talking about it afterwards. I just try to make sure my jokes come from an honest place.”

I believe this to be, at the core, why Gethard’s comedy output – from his show, to his brilliant podcast – has touched so many individuals. Judd Apatow seems to agree:

“I think the show is hilarious but it is also about a topic that a lot of people are struggling with and are ashamed to talk about,” Apatow told Deadline in an email. “I had an instinct that what Chris is doing will have a big impact on people as well as entertain them. As soon as I saw it I asked Chris if I could help in any way.”

The stage show saw first light at the Upright Citizens Brigade, unsurprisingly, and has since been developed at a number of other locations – including the Edinburgh Festival Fringe.  According to a spokesperson, the show will dive “into [Gethard’s] experiences with mental illness, ethically questionable psychiatry and finding hope in weird places” – sounds about right. I especially enjoy the latter part of the description – I think we can all relate to finding hope in weird places; like, say, a weird internet variety television show.

Performances will begin October 4th at the Lynn Redgrave Theater in East Village, New York. Let’s hope it has a long and fruitful run ahead of itself.