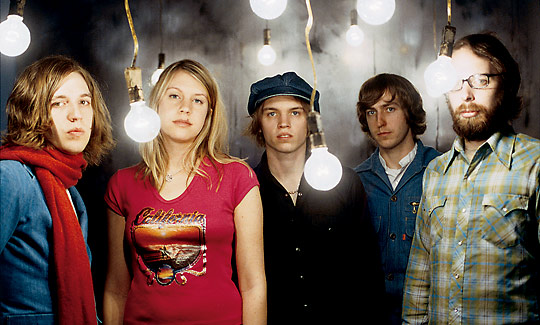 Waxing Nostalgic is an ongoing series of articles shedding light on albums and bands from our past, that may have gone unappreciated and overlooked for too long.

The Anniversary were a band that I discovered at the perfect moment. Having spent a while wallowing through the depths of pop-punk in early High School, along came The Anniversary – who despite sharing labels and touring with acts like The Get Up Kids, didn’t seem to break through. Instead of the emo-pop of the latter band, The Anniversary played just the right blend of synthy power-pop influenced indie-rock. I was hooked.

In the years between Designing a Nervous Breakdown and their second but final (not counting the posthumous collection Devil on Our Side) record Your Majesty, they made the shift to a more classic-rock influenced indie sound. I clearly remember going to the record store every week and asking if Your Majesty was in yet, because the release date kept getting pushed back again and again. It’s a fond memory, and still a great record that got a lot of flak it didn’t deserve. I could probably do a whole post on Your Majesty and how unfairly it was treated, but I digress.

The Anniversary broke up after Your Majesty, and at the time it seemed as though I was the only one who cared – in my circle of friends, anyhow. I moved on and never looked back, until some time in 2007 while on a particularly deep nostalgia trip, I stumbled upon the information that two members had recently released solo albums. Justin Roelofs recorded a self-titled LP under the name White Flight, and Adrianne Verhoeven recorded Smoke Rings as DRI – not to be confused with the thrash/hardcore/punk band D.R.I.

Apparently after The Anniversary, Justin went to Peru for a spiritual journey (read: he consumed a boat-load of hallucinogenic plants), and when he returned recorded White Flight. One listen and you can instantly hear the influence of his trip on this album. Sounding mostly like Beck, but with the arty weirdness of Animal Collective, the record jumps from funky hip hop beats to psychedelic pop, world music, and lo-fi jams. Yes, this is an Anything Goes! kind of album.

Despite some oft-ridiculous lyrics, the songs retain the knack for seriously catchy hooks that Justin’s previous band became known for. “Pastora Divine”’s chorus of la-la-la-la-la’s and distorted keyboards break down into a funky piano groove at the end that should get even the most hardened listeners bobbing along. “Solarsphere” never decides between being a freaky, early Beck-like acoustic ballad or a full on rock song – yet it works. Album highlight “Deathhands” is a terrific thick and hazy rap track, while opener “Now”’s drum-and-bass beat with Casio-keyboard sounding back-up is another memorable pop song wrapped in drippingly psychedelic undertones.

Like a lot of these throw it all in the blender albums, not every song is a winner; thankfully, there’s enough wild experimentation here that it ultimately remains exciting throughout. It’s one of 2007’s weirder albums, but also one of it’s most overlooked. I know a lot of “odd” bands got pretty popular around this time – Animal Collective included. Which is why it’s confusing to me that this album didn’t seem to get talked about all that much. It’s available on iTunes though, and is well worth the price for listeners with slightly adventurous ears. Later, another album titled White Ark was leaked online, which featured production work by Ratatat. This album was never officially released, and interestingly some of the backing tracks ended up being used by Ratatat themselves, if I recall correctly.

Adrianne took a simpler approach when she recorded Smoke Rings; going the solo-singer route, she compiled an album of laid back and soulful pop songs. Her voice is the main element on display here – although the excellent production deserves mention. While she did sing in another band post-Anniversary, one would argue that this is the first time her voice and lyrics have been front and center.

When I say Smoke Rings takes a simpler approach, it’s only in comparison to White Flight. Adrianne does work some genre-bending in here and there. Light touches of reggae (Adrianne used to host a reggae radio show at one point) and disco influences crop up from time to time. All the songs utilize her vocals to perfection, showing how truly talented she is as a singer when given the more intimate setting as these songs provide. The whole album is just a very warm, comforting experience; the kind of album you’d reach for pool-side, or on the beach.

Even AllMusic agrees: “Smoke Rings is the kind of album that gets overlooked at the time but will thrill those who stumble upon it looking for an alternative to the Ronson-ites and their classicist brand of retro-soul.”

Why Smoke Rings got overlooked in 2007, I don’t know. It was received well on the internet, but never broke into the mainstream. Both the White Flight and DRI albums were released on Range Life Records, run partly by Roelofs himself. They did eventually get picked up for distribution (online and off) by Saddle Creek Reecords, but otherwise I think the albums just didn’t have the push to break big. With more marketing, I do believe these albums could have at least reached the larger audience that they so deserve.

At the very least, they remain curiosities that have aged remarkably well, having begun as experimental projects in the wake of a band breaking up. That’s quite an achievement, in my opinion.