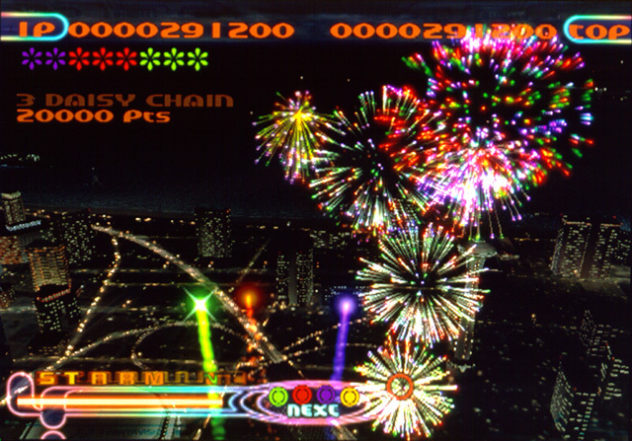 Well, on October 26, 2000, the Playstation 2 launched in North America, featuring 26 launch titles – one of which, was Fantavision, a puzzle game about fireworks.

Yeah, that’s the central conceit of the game – fireworks are launching in to the sky, and you’re in charge of setting them off. The closest comparison to Fantavision that I could think of would be the Gameboy‘s Tetris – although that was an entirely other level of popularity; thanks to the Gameboy, Tetris became one of the biggest demographic-crossing puzzle games of all time. Obviously, the same didn’t happen with Fantavision, but hey, it’s actually kind of awesome and certainly worth another look for those of you who have either never heard of the title, or never bothered to give it a chance.

Fantavision started its life as a piece of demo technology to showcase the graphic capabilities of the then-new Playstation 2 – it’s a real “Hey, look at all the pretty colours and modeled backgrounds we can show off at once” kind of deal. When the demo caught on and showed potential for a full-game experience, it received a release in Japan before becoming a launch title in North America (with a newly added multi-player mode.)

The jist of the mechanics, as briefly mentioned before, is that glowing coloured flares are being launched into the sky and it’s your job to select as many as you can and detonate them – being careful to time them so a daisy-chaining effect is achieved. You can only select flares of the same colour one-after-another, unless you select a wild-card rainbow flare or a white bonus flare, which effectively allows you to ‘jump’ to a new colour by way of resetting (as far as I can tell, anyway.)

The more you detonate at a time means the higher the chain and points, plus more opportunities to catch un-detonated flares with the sparks of those you have previously detonated. If you detonate enough star-flares, you’ll get a Starmine bonus – basically a flurry of same-coloured flares for you to chain together for huge points. Rinse and repeat, as the game is level based and gets harder and faster as you progress.

Anyway, it’s not much from the sounds of it, I’m sure – it’s partially in the presentation of the game. Much – if not all – of the charm has remained within the game for the North American release. The menu seems to position Fantavision as some kind of bizarre family game, with full motion video introductions and interstitials featuring heightened versions of a Leave it to Beaver-esque family, who have the game delivered to their daughter in the opening credits. In stark contrast of this imagery, the soundtrack is almost entirely techno-fueled with moments of new age soundscapes – not entirely unexpected for a puzzle game of this type.

As far as reception, the game received its share of mixed reviews. Some reviewers claimed that “there’s just not enough game” while others were unsure of its initial price point:

“If you’re a puzzle fan, you’ll need to wait longer for a better puzzle game to come along […] as this won’t be able to fill people’s lust for the next Tetris. If this title were $29.99, then it’d be worth recommending shelling out the clams for the game. Until it does drop in price, this is a recommended pass.” – Gaming Entertainment Monthly

Some were much more kind, though – even going as far to call it the surprise of the launch catalog:

“Out of nowhere comes this great little puzzle game that isn’t just a particle effects demo as many have suggested. Playing the game is fairly simple although the pace will soon become frantic as you try to detonate all the fireworks on screen before they fizzle out. Fantavision is an excellent puzzle game, it looks great and is a lot of fun to play. What more could you ask. Go buy it.” – Futuregamez.net

What many seem to overlook, is the longevity of Fantavision‘s multiplayer mode. Much like Tetris, Dr. Mario and other classic puzzlers, pitting yourself against a friend is one of the most satisfying ways to play. Fantatvision‘s multiplayer mode finds two players in a race to reach a pre-determined amount of detonated flares, but tosses in some fun bonus items which allow you to shrink your opponents screen-size, swap sides of the television, or swap flare-sets (so all your un-detonated flares are now your opponent’s worry).

So, whether you previously cast Fantavision aside as nothing more than a showcase for the PS2’s particle effects, a thin-puzzler with no longevity, or just plain have never heard of the oft-overlooked gem, you owe it to yourself to at least experience one of the most bizarre launch titles of all time.

And hey, you may even become as addicted to the gameplay as I am.

Add your favourite PS2 games to the comments below – let’s get a discussion going!