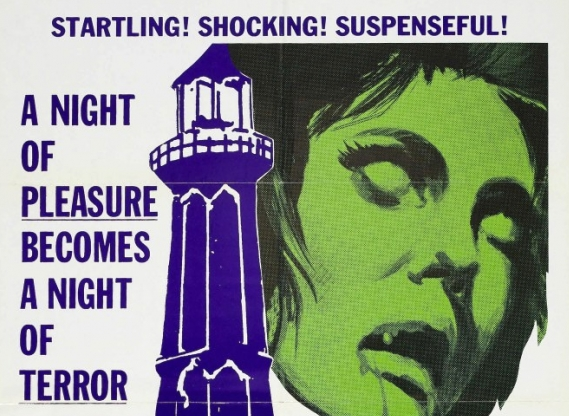 “It’s the kind of place that would give anybody the creeps. Who in their right mind would even go to this island? Would you go there? Would you dare spend the night in this monument of the macabre?”

Tower of Evil aka Horror on Snape Island from 1972 is exactly the kind of movie that you should hope to find digging through a dusty bin of VHS tapes at a thrift store or garage sale – which is precisely how I stumbled upon it. With its goofy – yet oddly fitting – photo-collage cover art and poorly written description, I was sure I’d be in for a snoozer. What I found though, was a totally groovy early-seventies mixture of fog-heavy, Hammer-esque gothic horror and gore-laced, exploitation shocker-slashers. It’s actually almost downright ambitious, in many ways, despite it’s low budget.

After a father and son team of fishermen (George Coulouris & Jack Watson) dock on Snape Island, they stumble upon a series of gruesomely murdered corpses – some nude, and others not. They split up, of course, and the father is murdered by a screaming, naked woman (Candace Glendenning as Penelope). She’s taken to a hospital, in a state of frozen shock, and undergoes an experimental procedure involving a bunch of flashing disco lights to awaken her. When she does, she begins to have flashbacks involving her trip to Snape Island with the aforementioned corpses, who were actually her friends – Mae (Seretta Wilson), Des (Robin Askwith) and Gary (John Hamill).

Meanwhile, a handful of archaeologists are investigating the island, as it is apparently an ancient burial ground that may-or-may-not contain a crap-load of gold. They all pack up, jump onto a fake boat, and head to the island in search of both gold, and answers – as some kind of investigator tags along to figure out what really happened to Penolope. Could she really have murdered all her friends for no reason, or is something else lurking on the island?

Phew! Yeah, there’s a lot going on in here, and I haven’t even mentioned the fact that all of the archaeologists seem to have their own interpersonal dramas going on – which is pretty much an excuse to have most of the cast disrobe and hop into bed with each other. Since this film plays heavily upon the gothic horror set-up, it is expectedly full of thick, hazy fog and dripping with atmosphere. From the surprisingly violent opening scene, right through to Penelope’s light-show procedure freak-out, I was instantly on board with Tower of Evil. It’s also fantastically shot – I mean, even on my grainy, poorly cropped Interglobal Video cassette, you could tell this movie is just begging to be viewed in high definition. It has a similar kind of vibe that The Legend of Hell House has, in some regards. Not surprising, when you check the credits and see that Desmond Dickinson – the cinematographer – was attached to legit films like the 1948 version of Hamlet and The Importance of Being Earnest. 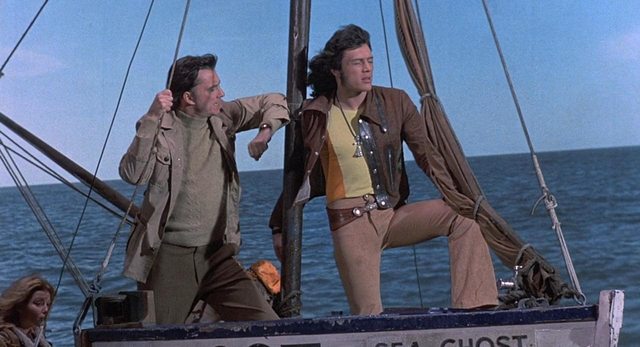 With the introduction of the full-cast, things do take a turn for the goofy- the dialogue especially. Thankfully, it is the entertainingly over-the-top kind of goofiness, and not the lame, eye-roll-let’s-turn-this-off-maybe kind. It also is stuffed to the brim with awesome seventies fashions that are so musty, you can practically smell the dust through the television screen. There’s also plenty of great studio sets that, while they may not be so convincing, are rich in details and (dated) charm.

So, while the oft-snicker-worthy dialogue – and at times convoluted characterizations – threatens to derail Tower of Evil here and there, I have to say I had a blast watching it. It’s just a thoroughly sleazy good time – piling on the nudity and bloody kills through a manageable running time. There’s also a fairly solid twist that brings things through nicely to the climax – nothing that will shock and astound you, but might have you nod your head in appreciation (Hell Night, anyone?).

Tower of Evil definitely deserves a viewing for fans of ’70s British horror and proto-stalk-and-slashers. It has thankfully made the jump from the VHS bin to BluRay, thanks to Scorpion Records

. That’s definitely a release to save a few bucks up for.