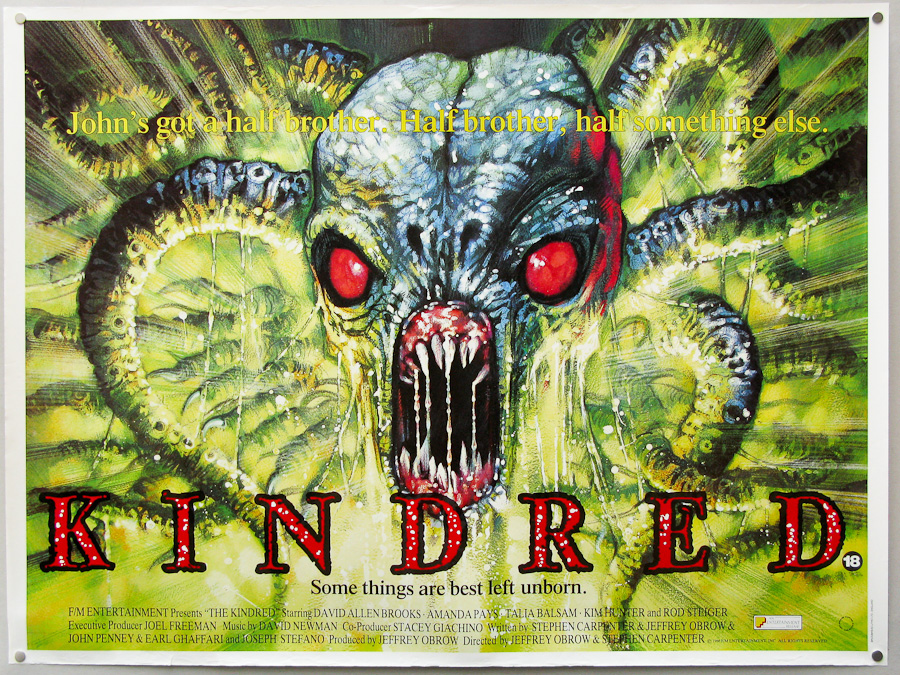 I’ve been in a bit of a monster movie mood, ever since I reviewed Scream Factory’s The Beast Within earlier this month. When I found the Vestron Video VHS release of The Kindred at a thrift sale recently, I was pretty excited – as it’s a title that I have been after for a while now. When I was younger, I saw the cover art again and again but never ended up renting it. Ever since, it has been tucked away in the back of my mind – probably somewhere mentally filed alongside the vaguely similar Proteus cover.

First things first, The Kindred was written by about five people, and directed by two. The directors – Stephen Carpenter and Jeffrey Obrow, who also co-wrote – had previously worked together on 1982’s The Dorm That Dripped Blood aka Pranks as well as 1984’s The Power. Carpenter wouldn’t go on to direct anything again until 2001’s Soul Survivors. The most notable of the other writers would be Joseph Sefano, who wrote the adapted screenplay for, yep, Psycho. It’s quite the meeting of minds, if you think about it – though it also sends some mixed messages. With Sefano on board, would this be a classy affair? Or, with a bevvy of genre barrel-scrapers, would it be more exploitative?

Well, the answer is both – sort-of. The Kindred’s overall tone isn’t so easy to pin down. The concept is as attention grabbing as it is convoluted, in which the recently hospitalized scientist Amanda Hollins (Academy Award winner Kim Hunter!) reveals to her son John (David Allen Brooks) that after she separated from her crazed lab partner Dr. Phillip Lloyd (Academy Award winner Rod Steiger!) she continued their dangerous gene-splicing experiments and needs her notes and home-lab destroyed before the doctor finds out. She also mentions – in passing – that John has a brother Anthony. After meeting his mother’s self-described biggest fan, John rounds up some of his friends to travel to his mothers house, and execute her final wish to have her experiments destroyed. It’s there that he finds out the true nature of Anthony, who is in reality a lab-grown mutation with a thirst for blood.

The set-up is pretty great, and the appearance of a few Academy Award winning thesps (who are more than willing to ham it up) certainly helps things get going.  The script mostly foregos any major moments of levity – though a few both intentional and unintentional pepper the film. A watermelon is implemented in the script both bizarrely and hilariously, which features into one of the film’s more memorable scenes. I won’t spoil it, but that leads me to the true star of the film, which is the special effects. 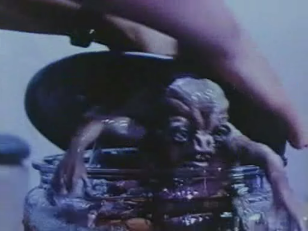 Awww, isn’t Anthony a widdow cutie pie? Yes he is! Yes he is!

Look, no effect from The Kindred could ever remove The Thing‘s splat-covered crown, but you could certainly place this flick a few rungs below The Blob (1988) in terms of films worth watching for their practical transformations and murderous tentacles alone. Some of the creations are a bit rubbery, and one scene with Anthony wrestling to be set free from a lab jar is downright humorous, but there’s plenty to be found elsewhere for fans of gelatinous, slimy creature effects.

It’s just that the script moves in fits and spurts – when the film opens, it’s intriguing. When that gets stale, the film switches gears and becomes a friends-in-house-with-unseen-terror flick – here it’s basically a monster-slasher. When that becomes a pinch tiresome, it flirts with body-takeover horror – including the film’s highlight when one character acquires a set of gills. And finally, it becomes Anthony’s show, with a huge showdown and critter-filled denouement.

I mean, even my opinion of the film is bouncing around as a result of the all-over-the-map script. I can’t come down too hard on the film though, as even with an uneven script, The Kindred is entertaining throughout. The effects scenes pop up at just the right moments to pull you back in, the acting ranges from fine to enjoyably-over-the top, and the running time clocks out after around 90 minutes.

I can definitely understand why – when paired with the fact that this film never made the jump from analog to digital – The Kindred gets praised as a lost monster movie classic; I just can’t lend my voice to that contingent. I like it just fine, though, and could see myself re-visiting it again in the future – it seems like it would lend itself especially well to the crowd-around-a-television kind of experience.

And hey, it’s got car-flipping monsters, women transforming into fish, and Rod Steiger operating on a wailing cat-creature – so I’m not going to tell you not to watch this thing. I’m not a moron.