There is an inherent danger in revisiting the things we loved from our childhood. Back then our fresh, idealistic brains were grasping desperately for new experiences, which were in no short supply. We were open to everything by simple virtue of the fact that we had little by way of comparison. If you’ve never had pizza before, even the lifeless, cardboard-crust disaster that is Pizza Pizza would still be pretty amazing. But the older we get the more discerning we become. Sure, you still order Pizza Pizza, but only because its 1 am and you’re super drunk and everywhere else is closed. But as you cram it into your compromised, bloated face you are invariably wishing Pizza Hut was still delivering. I may be projecting a bit here.

This is why I was reticent to revisit Joe Dante’s 1987 classic Innerspace. I watched the hell out of that movie when I was a kid, and I’m sure it informed much of how I watch and enjoy movies to this day. It had all the elements: the genius of Martin Short’s jerking, flailing little body, Meg Ryan’s heart melting, wholesome-yet-mischieviously-sexy smile (that has since been ravaged by about a ton and a half of ill-advised collagen), and Dennis Quaid’s heroic pilot who plays by his own rules and makes alcoholism seem like a pretty sweet life choice. This movie is also the reason that whenever I hear a Sam Cooke song I have to fight the urge to dance around like a huge spazz. And it’s a fight I rarely win. But I’ve watched comedy evolve and change in so many ways since those sweet, unassuming formative days. Against the current landscape of filmed comedy most of the movies from my childhood might seem kind of sparse and devoid of rapid fire one-liners and set pieces to the kids of today, and I was afraid that I too was spoiled; that the pizza of my youth had congealed and moulded over in the harsh refrigerator of time.

But, in the interest of regaining some of that childhood wonder that years of soul crushing adulthood have bludgeoned into a near comatose state, I bravely went ahead with the viewing. 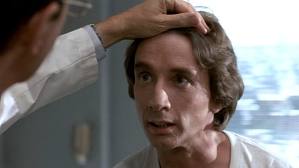 Martin Short’s doctor checks him for an extreme case of wackiness.

What immediately struck me, as is usually the case when re-watching movies from the 80’s, is how measured the comedy is. The comedy formula back then, for the most part, seemed to be a relatively high concept plot executed by SNL/SCTV alumni delivering relevant dialogue in a clever or charming manner. Sure, Chevy Chase would more than likely fall down or eat a sandwich a dog had peed on. Sure, Robin Williams would often mug painfully for the camera while doing an offensive black and/or gay voice. But more often than not those divergences were peppered throughout a serviceable plotline. Pitch meetings nowadays seem to be a lot of ‘What if Vince Vaughn and Owen Wilson didn’t know what computers were and they had to work for Google?’ or ‘What if Adam Sandler, Chris Rock, David Spade and off-brand Chris Farley were adults who farted all the time?’

Which is why watching Innerspace again was such a successful trip down the nostalgia path. I was watching an actual movie, not just a bunch of shit that happens. I felt like I was ten again, watching my hero Martin Short prove that tiny little weirdos like me had a place in society, if mostly as a laughing stock. I wasn’t too bothered though, because Michael J. Fox was there too, assuring me that we could also be cool and ride hoverboards.

The movie follows Tuck Pendleton (Quaid), an alcoholic air force pilot who has been chosen to test a new and radical experiment. He is to be shrunk down to a miniscule size in a little ship and injected into the body of a rabbit for the advancement of unspecific science. But a rival gang of scientists, led by the threateningly sexual Fiona Lewis and the always delightfully sleazy Kevin McCarthy, want to steal the technology and use it to their own ends. Which is why, in a desperate move by the good-guy scientists, Tuck is instead injected into the ass of unsuspecting hypochondriac Jack Putter (Martin Short). Now Putter and Pendleton’s girlfriend, Lydia (Ryan) must race against time to get Tuck out of Jack before Tuck’s air supply runs out. But it won’t be easy, what with all the evil scientists and Persian cowboys chasing them. Alright fine, there’s only one Persian cowboy. But he’s very good.

Now don’t get me wrong, the plot does not run on perfect logic. There is a scene in which Tuck uses his unspecified science to rearrange Jack’s face to look identical to the Persian cowboy’s so he can go undercover. This begs the question ‘why do they have this technology on board if he was originally going to be injected into a rabbit? Were they going to try to make the bunny look like a Persian cowboy?’ The simple answer is that 80’s movie reality was one where pure imagination won out against hard logic and we all just drank the Koolaid. And it was delicious.

Innerspace employs all the tropes you expect and want out of an 80’s comedy: dashing but flawed hero, adorably shaggy haired/unreasonably shoulder-padded heroine, wackily gesticulating weirdo, Persian cowboy. And it does it all with practical effects that (yep, I’m going to say it) look a hell of a lot better than all the CGI robots, monsters, Smurfs and ‘splosions all currently vying for our rapidly deteriorating attention spans for a few hours.

So this is a call to all you kids born in the 90’s and 00’s: pick up Innerspace, and Three Amigos, and Vacation, and The Blues Brothers and learn that comedy isn’t necessarily a contest to see who can fart the most times in an hour and a half.

Oh, and one other favour, kids, please stop shaving the one side of your head, it looks fucking stupid.