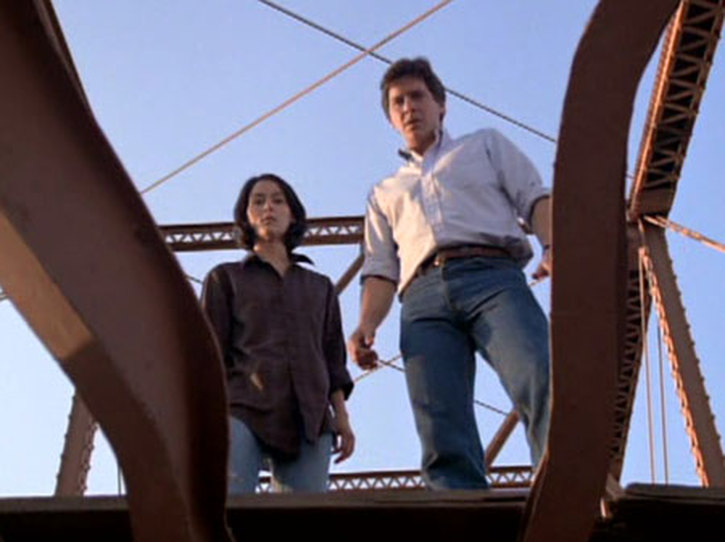 “Imagine what would happen if every desire, every urge, every passion locked deep inside all of us suddenly exploded.”

Impulse is an interesting town-goes-crazy mystery-thriller, with a solid set-up, some delightfully unnerving scenes, and a great finale. Unfortunately, the film does stumble along when entering the finale, but as far as undiscovered VHS-era flicks with high concepts go, you could do a lot worse.

Meg Tilly travels home – with her partner Tim Matheson – after her mother commits suicide during a vague and distressing phone call. Once there, they witness increasingly bizarre situations of townspeople acting out upon their base impulses – like stealing from the bank, urinating in the streets, ramming cars in parking spots, etc.

It all has a vaguely Body Snatchers feel to it, and it’s definitely a movie that grabs your attention in the opening stretch. The film takes a few strange turns that might have you questioning where it is headed – specifically with a few of the character arcs, looking at you Tim Matheson – but its penchant for unexpected bursts of violence keeps it mostly interesting throughout. Meg Tilly has never really impressed me – I’ve always found her to be downright awful in Psycho II, though I’ve never seen The Big Chill – but here she’s a perfectly capable lead whose oft-stoic attitude actually lends itself favorably to the plotting of the film.

I can only imagine hordes of people disappointingly returning the film after renting it on VHS, their interest piqued by its pseudo-erotic cover art. It’s a serious mislead, especially considering the tag-line on the box suggests “your every passion and desire being unleashed”. There are a few scenes that follow that idea, but the concept is much more about people acting upon their initial animalistic impulses, rather than focusing specifically on sexual ones – as the poster would lead one to believe.

Looking past the advertising though, Impulse is worth checking out, and could definitely be considered as having potential for a fantastic remake. It’s not a misfire by any stretch of the imagination, but one can only imagine where the concept could go with a more modern angle and a slightly tighter pace.

Episode 125 - Guardians of the Galaxy & Battle Beyond the Stars