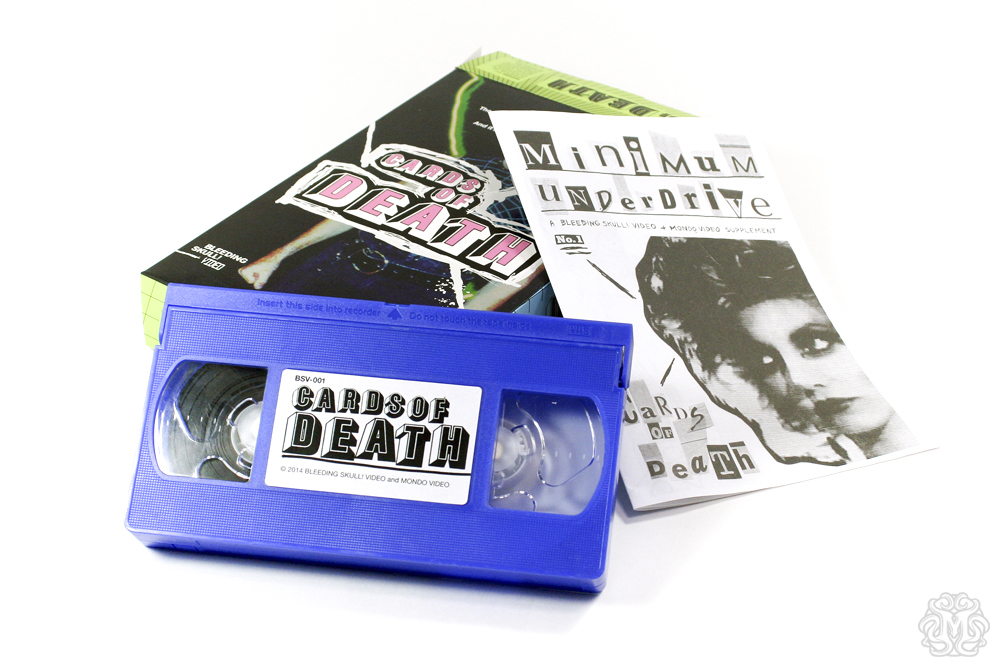 A police officer wanders into a back-alley, and subsequently into a darkened, neon-tinged club-like room and is tied up and tortured with a cheese-peeler by two new-wave looking weirdos.

When the police officer never resurfaces, an “investigation” takes place alongside a series of bizarre-yet-similar murders that have been taking place.

Elsewhere, patrons arrive at the aforementioned club to play a poker-like game that involves tarot cards. If the Death card surfaces in your hand, you’re killed. If you win the game, you have to murder the loser within 24 hours or you both will be killed.

In a living room in Toronto, a man is at once intrigued and bored by the VHS he has popped in his VCR.

Stylistically, Cards of Death‘s neon-slicked, lens-flared and hazy SOV cinematography works wonders. The casio keyboard soundtrack – like many others of its ilk – also adds to the skeezy,what-am-I-watching? vibe.

Pacing wise, though, the film is all over the map and for every interesting or off-putting scene there is another yawn-inducing one on the way. The detective plot goes nowhere until it needs to be resolved, at which point it wraps up perfectly and conveniently.

For fans of the uber-obscure, being able to own this piece of video history (only released on tape in Japan, in limited numbers, and never released in the US until now by Bleeding Skull! Video & Mondo) will be a delight. For others, it will be a fair piece of SOV curio. It’s hard to call the film an total success, though. What I can say, is that the end credits sequence and theme song are both incredible and absolutely worth the price of admission.

On the physical side of the package, Bleeding Skull! Video and Mondo have outdone themselves, presenting the film in a wonderfully over-sized big-box (stickers included!) with brand-new art and a copy of the zine Minimum Overdrive tucked inside – featuring a great interview with Director W.G. MacMillan. Seeing as this film was often referred to as the “Holy Grail of unknown slashers”, this is above-and-beyond territory, and has me eagerly anticipating any further releases from the Bleeding Skull! crew.