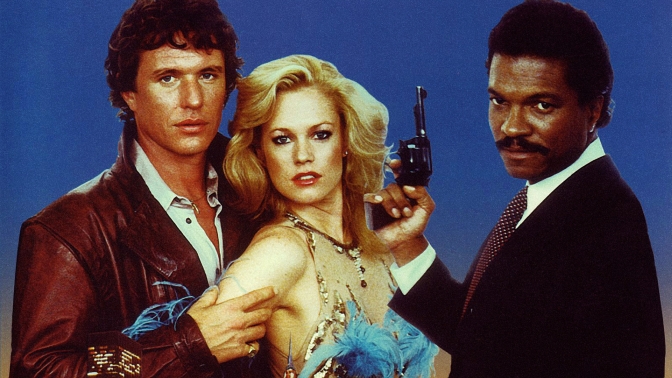 Fear City has been on my radar for a little while now – having seen the excellent poster and VHS art a few times over the years – so when it popped up on my Netflix dashboard recently, I had to finally give it a whirl.

Abel Ferrara‘s sleazy mini-epic follows the exploits of Matt Rossi (Tom Berenger) and Nicky Parzeno (Jack Scalia) – co-owners of Starlite Agency, a stripper booking agency located deep within the heart of Times Square in the early eighties. Unfortunately for the strippers, a serial killer has targeted Starlite‘s women and is attacking them after their performances. Al Wheeler (Billy Dee Williams) has also been scrutinizing the duo’s activity as of late, and hopes this new case will allow him to dig up some dirt on the company. Matt – a former boxer who quit the sport after an opponent died in the ring – is now forced to face the problems from his past while attempting to stop the murderer before his on-again off-again lover Loretta (Melanie Griffith) becomes a possible target.

Ferrara – fresh off his notorious rape-revenge flick Ms. 45 a few years prior – offers up slick, neon-adorned direction featuring a veritable smorgasbord of 42nd Street footage. In fact, the film was so trashy and lurid that the original studio (20th Century Fox) declined to release the film, and sold it to a smaller, independent distributor¹.

Despite this, Fear City remains an effective thriller – even in spite of the silly martial arts angle it takes with the serial killer. Fear City was filmed in the early 80s, when the public’s fascination with ninjas and martial arts – especially within genre films – was still fairly high, hence its inclusion in a film where it could otherwise have been omitted. Regardless, it feels odd to go from a legitimately startling attack scene, to footage of the killer naked in his loft practicing nun-chuck skills. He’s also narrating and writing his exploits into a notebook labeled “Fear City” – a plot element that is never really capitalized on by the end of the film.

Performance wise, Fear City excels. In particular, Billy Dee Williams is great fun to watch as the bad-ass Al Wheeler – miles ahead of his hammy, comedic performance in later work like 1987’s Number One with a Bullet. Berenger plays the intense, tortured boxer straight, and Griffith sells a believable portrait of a woman who is unable to stop herself from slipping back into old drug habits. The killer remains uncredited, and at times does create an intimidatingly precise murderer – but the script never allows him to be fully frightening, instead having him dance about theatrically while committing some of his later attacks. It’s a shame, because his characterization is really the only major misstep of the film.

Otherwise, it’s a sleazy, character-driven, worts-and-all portrait of New York City’s pre-Disney Times Square that doesn’t feel quite as over the top as some other pictures of the time – most likely due to the influence of Ferrara’s own NYC upbringing. One harrowingly realistic scene that rings true involves a flashback, whereupon a young Matt experiences a violent mob shooting first hand – only to be whispered “silenzio” as the offenders drive off. Fear City might feel over-stuffed with these character details for a movie with a 90 minute running time, but it’s this ambitiousness that makes the film so interesting.

Fear City is absolutely worth a look for fans of Ferrara’s work, or thrillers that retained a scuzzy late-70s vibe into the early 80s. Fear City would probably fare well on a double-bill paired with other trashy flicks like Gary Sherman‘s Vice Squad or John Frankenheimer‘s 52 Pick-up, if you ask me. Fear City is currently available to stream on American Netflix, so there’s no reason not to check it out the next time you’re in the mood for something a little grungy.