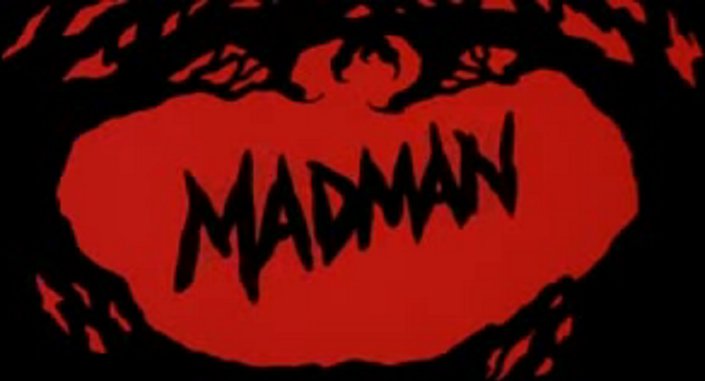 Just the other night, I stumbled upon what is currently my favourite Tumblr account: VHS Notebook. The concept, is that Rickey Purdin will watch a movie – often horror movies, though not exclusively – and draw “the most radical characters”, while offering up a handwritten summary of the movie including notable scenes, trivia, and more. It’s all just a ton of fun to browse through – I lost an hour or two on there the other night, myself. One could make the argument that the act is not unlike browsing through a video store, in some regards – but I digress. Madman (1982) caught my eye, as I had a vague recollection of the VHS cover art, though I had never actually seen the film. The VHS Notebook write-up sounded pretty awesome, so why not? This will be a pretty spoileriffic run-through, so if you want to skip to the end for my thoughts, feel free! I ain’t even mad!

The film opens with a campfire scene – camp counselor T.P. is singing some kind of song that also doubles as a spooky story. He sings stuff like “He hid amongst the trees / but he is with the breeze” and “A chill in the air / the scent of death crawling / full moon the witness / as one by one they trespassed his ground / and chose to take chances / dragged into the black” – the way T.P. sings the song, it literally sounds like he’s making it up on the spot. Lines don’t rhyme properly, and every time you think he’s finished the story he just starts singing again. While this is going on, we’re treated to shots of the counselors from later in the movie – hinting at their upcoming deaths.

That was actually a pretty cool way to open the film, playing upon the convention that as an audience, we all know what will ultimately become of these characters. Hinting at their demises actually adds a dose of tension, in a weird way – you’re on edge a little bit as they’re introduced, seeing as we have more knowledge of the situation than they do. It’s not brilliant, but it’s a nice touch.

T.P. wraps up his lame song with a yelp – a lame attempt to tag his performance with a scare for his fellow counselors. Max, an older man who I suppose is the head counselor, begins the real campfire story. He tells them about Madman Marz, a crazy dude who gave his whole family forty whacks with a axe. If you call out his name near his dilapidated old house – which just so happens to be within eyesight of their campfire – he’ll come and kill you and anyone else he can get his hands on. So the story goes, anyway. One of the counselors, Richie, tosses a stone at the house and yells at Marz to come and get him. Everyone takes off except for Richie, who breaks off from the group and takes this opportunity to check out the house. He does this, even though he looked up and saw Marz hanging out in a tree two seconds prior – pretty bad-ass introduction for Marz, though.

While the others are on their way back to the cabins, we make a pit-stop to introduce… an axe stuck in a tree-trunk. Dave and Max have an exchange about how no one can get it out – so don’t even try okay? Why, only a madman could get that ou– never mind. We’ll come back to that obvious telegraphing later. Max takes off and leaves everyone at the camp to go play cards at a bar. He’s just like “Anyway, see ya, don’t get killed while I’m boozing it up! Thanks!”

At this point we’re introduced to a random fat old man, who promptly has his throat ripped out by Marz. When this happened, it was a genuine jump-scare that I really wasn’t expecting. So, Madman: 1, Dan: 0.

Counselor Betsy – who seems to be the apple of T.P.’s eye, and most recently shot down his advances – comes around on ol’ Toilet Paper and the two of them shuffle off to hit the Jacuzzi. You’d think to have sex, but first they dance around – possibly trying to get the Jacuzzi to turn into a whirlpool. It doesn’t work, so they have sex anyway. While this is happening, the rest of the teens lay down in a cabin and touch heads. Seriously, look: 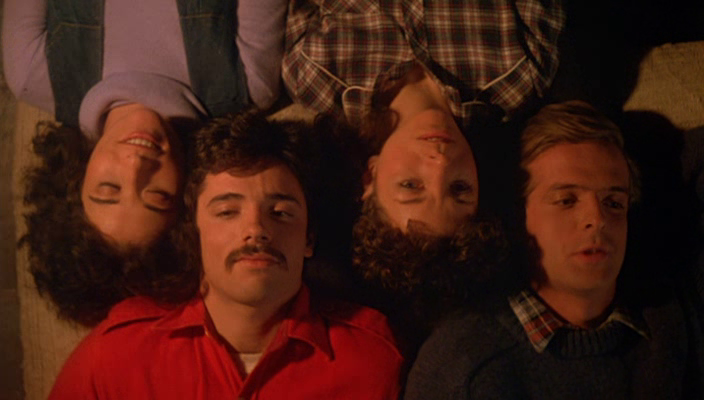 “No, Bill, I really don’t think that if we line up our ears we’ll be able to share our thoughts.”

So far, we’ve only caught a few silhouetted glimpses of Marz, and every time he shows up I swear that he’s a Sasquatch. He’s super hairy, and spends a lot of time grunting and spying on people. This changes when Marz tosses a noose around T.P.’s neck – who’s still looking for Richie – and hangs him. It’s a pretty crazy kill, actually.

Now Marz has some bloodlust in him, and decides to go yank that axe out of the stump. Sufficiently armed, he takes to chasing Dave, who again has ventured out to find toilet paper – I mean T.P. – and Richie. This happens a lot in Madman, someone leaves to go look for the others, and is eventually killed, only to have another person decide to go look around when that character doesn’t return. It can be pretty frustrating, as it causes the movie to drag on – even with a scant 88 minute running time. Anyway, Marz is swinging his axe around at Dave – producing some hilarious video game air-swiping noises – and after a while he makes contact, decapitating him.

Now Stacie has decided to drive around and join in on the hunt for T.P., Richie, and the others. Her car stalls out though, and as she’s rooting around in the engine, Marz jumps on the hood and pops her head off. I figure the hood had to have been lined with razor-blades or something, because that thing cuts her head off clean.

Ellie – who one might assume is the Final Girl by this point in the film – and Bill now get in on the search action, and stumble upon Stacie’s truck. Even though it’s covered in blood, Bill says “I don’t see anything, Ellie!” 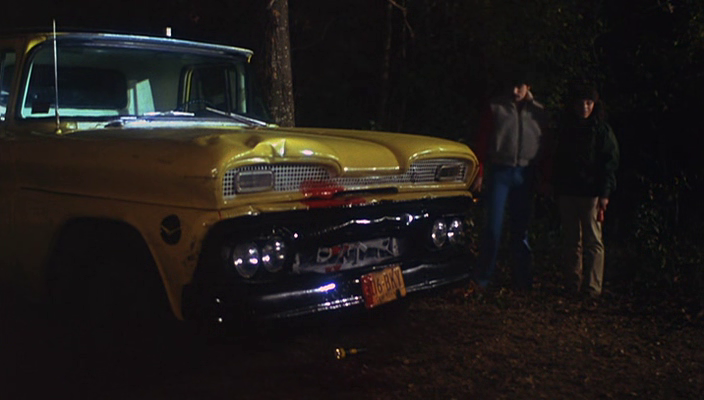 When the car won’t start, Bill checks the trunk – finally – and realizes it was only their friend’s pesky decapitated head that was stopping the car from starting! He chucks it into the woods and attempts to drive Ellie to safety, but Marz isn’t having any of that. He pulls Bill out of the truck, kills him, and chases Ellie into a cabin. Ellie decides she’s hungry, goes into the kitchen and hides in the refrigerator. When she’s through with her sandwich – or when she thinks Marz is gone, whatever – she pops back out only to greet Marzs’ axe with her face shortly thereafter. I guess she’s not the Final Girl after all.

Which leaves us with Betsy, who – having upgraded to Final Girl status – smartly grabs herself a shot-gun and heads straight over to a cabin window, just in time to shoot Ellie’s corpse in the face! I guess Marz tosses her dead body up against the window, and Betsy just straight up blasts her the face with the gun. It’s a pretty incredible sight to see – what a classic Marz prank!

Betsy ends up getting dragged to a basement by Marz – where he’s got all the other corpses lined up – and impales her on a meat hook. But Betsy gets the last laugh, stabbing Marz in his shoulder, causing him to knock over a candle and setting the whole house ablaze.

Head counselor Max is now on his way back to camp, when he runs into Richie – yeah, the punk kid who actually caused all this mayhem pretty much wandered around in the woods the whole movie and survived. He stares at the camera and keeps repeating “He’s REAL! MADMAN MARZ!”. Then we’re treated to an original song about Madman Marz! It’s a jauntly little ditty about Marz and it ends the movie on a hilarious high note. It’s unreal.

Madman is at first glance, a pretty standard campfire slasher picture. All of the classic elements are here: a camp full of counselors (though this time children are present as well), the spooky tale of an unsolved murder from the past, idiotic horny teenagers, et al. As I mentioned, it definitely drags in the middle – when the plot becomes a loop of characters leaving to look for their friends, getting killed, rinse, and repeat. To Madman‘s credit though, it’s as thoroughly watchable as it is formulaic. Even though these characters run around, executing some of the worst “slasher logic” you’re likely to ever see, it mostly remains entertaining.

What Madman does have going for it, is a really established sense of style. The cinematography and lighting is noticeably slick and atmospheric – miles ahead of the flat direction of the first two Friday the 13th films (1980 and 1981) that preceded the release of Madman. Funnily enough, that franchise was also attempting to add some depth to it’s formula the same year Madman came out, with Friday the 13th: Part III – in 3D. The soundtrack leans heavily on Tangerine Dream style synth gurgles, and at most points it really works. It probably helps that I have a major soft-spot for synthesizer scores. Still, there are a few moments where it’s a little too distant to properly underscore the tension of the scenes.

Madman Marz as a villain comes with his share of flaws – unconvincing character design has him floating somewhere between husky murderer and mountain animal. This was most likely an attempt to establish him as an un-groomed, left to his own devices style killer, but at times comes off confusing. Has he actually been hanging out in the woods all these years, or is there something more supernatural going on? Marz is definitely a character that I would have enjoyed seeing more of though, as I could imagine the filmmakers refining him over time. Maybe a reboot is in order?

As it stands, Madman is an interesting early entry in what I’d consider the “second wave”* of slashers. There’s a lot of potential in the film, but ultimately it remains more of a nice curiosity than something a bit more fully-formed. Certainly check Madman out if you’re a slasher fan who has yet to see it, it’ll pair well with movies like The Burning, Sleepaway Camp or Hell Night – and don’t forget to head over to VHS Notebookto see Rickey’s take on the movie, complete with his drawing of Marz.

*To clarify, I’m referring to waves of slasher films outside of the origins and/or influences of early splatter pictures, or proto-slashers. Specifically, thinking along the lines that early slashers (like Black Christmas, and Halloween) lead up to the release of Friday the 13th in 1980 – which could potentially be considered the final film of said “first wave” – and thus directly influenced the “second wave’s” shift in style and tone in the early 1980s. Or at least, that’s how I like to think about it.