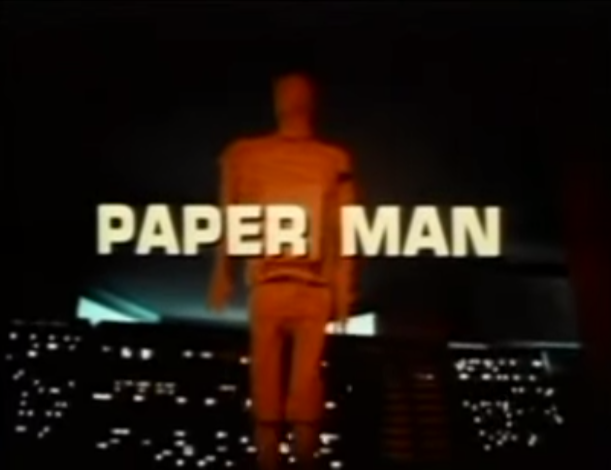 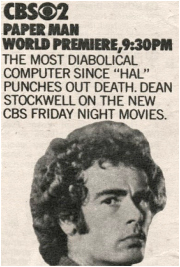 Recently, while on one of my many thrifting excursions in Peterborough, I picked up a 1984-1985 edition Movies On TV! paperback. It’s not unlike a Leonard Maltin knock-off (I have even used it to play the eponymous game), and is designed to be leafed through to decide if a movie coming up on television would be worth your time. The kicker though, is that it features a wealth of made-for-TV movies, ratings and reviews, most of which I wouldn’t have known about if not for this book. One of the TV movies that jumped out at my girlfriend when leafing through, was Paper Man (1971). After reading the synopsis, I knew it would be right up my alley.

The Paper Man in question, is Henry Norman; as the film opens, we see a broke student has been mistakenly mailed a credit card with this name engraved upon it. He – and his three friends – decide to create a fictitious Henry Norman by using the school’s computer to flesh out his faux-financial and employment backgrounds in order to dodge the payments. The cast, including Dean Stockwell and Stefanie Powers are all fine, putting in fair television performances, but won’t bowl you over. 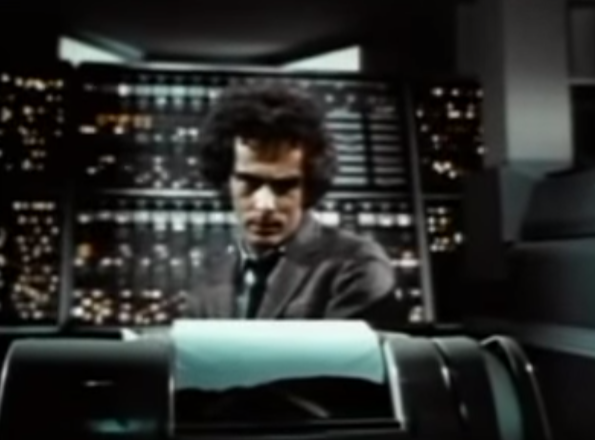 The real fun stuff, comes from the proto-techno-thriller plotting. Soon, the purchase of a gun shows up on the credit receipt – but no one will fess up to purchasing it. Later, the students start to get picked off one by one, in increasingly entertaining ways – including one that pre-dates the elevator death in Final Destination 2. There’s even some silly stuff involving a high-tech robotic medical dummy, which is clearly just a human pretending to be a robot. Could a computer mainframe actually be taking these students out, or is there a real live (and deadly) Henry Norman on the other end of the credit card?

It’s a plot that could have easily been touched upon, and left – but credit should be given to Paper Man for at least working through this angle for a large portion of the running time. The fascination and wonder of early-computing runs through the film, and easily passes over onto the audience – much like watching War Games and marveling at the early-tech on display. Paper Man serves as great documentation of this era, where students played chess against computers and dictated the dictionary in attempt to make the computer ‘learn’.

Paper Man certainly feels like a made-for-TV flick, with some leisurely paced scenes and a segmented structure, but the computer angle makes it feel both ahead of its time, and ripe for a remake. Not too much would have to change about the plot to update this one to modern times, and the ‘unseen’ angle of the mystery really works for the first half of the film; when the gun purchase shows up, it’s a real interest grabber. Plus, scenes of the students sitting in front of these early computers – sans monitors – reading dot-matrix print outs which scream D E A T H ! are a real hoot.

Paper Man is a satisfying and above-average curio, and is easily available on YouTube, currently. There’s also a bare-bones DVD release (double-featured with Agency), thankfully – it’s definitely worth a look.

The Descent, with Katarina Gligorijević