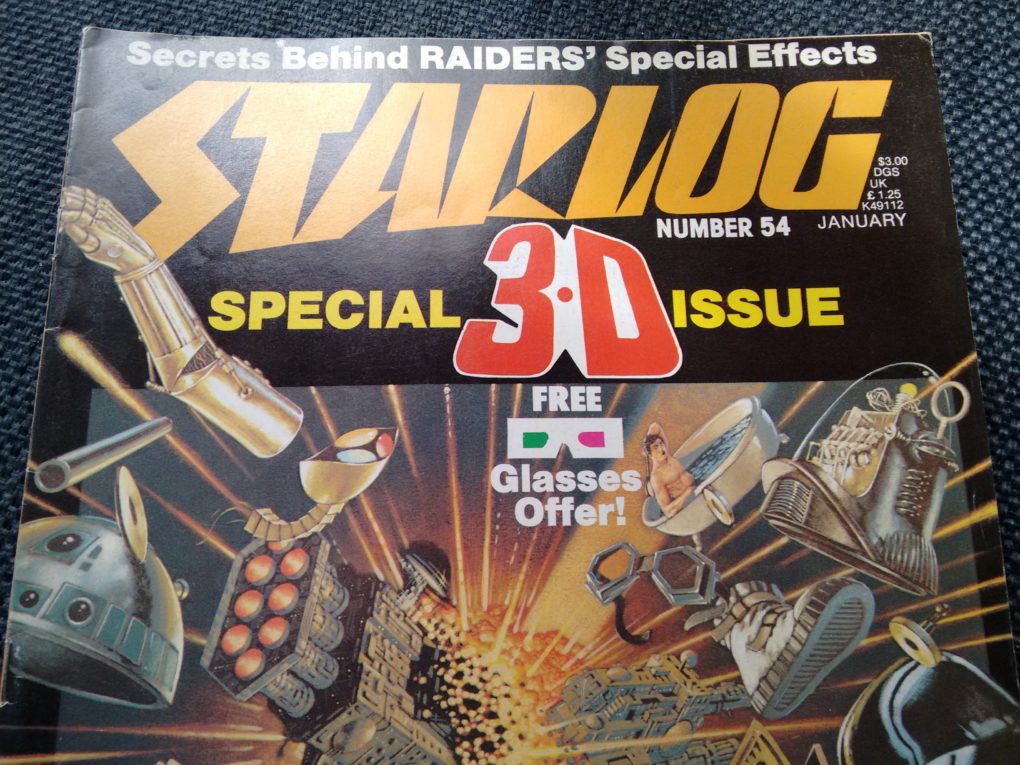 I’m back with another run-down of some interesting tid-bits that I found leafing through another issue of Starlog Magazine! This time, I perused Issue #54, which was actually a 3D issue. Well, a few pages of it are in 3D anyway – and even then, a number of those pages don’t even utilize the ol’ red-and-blue type of 3D that the cover promises; on some pages you’re supposed to glare at separate photos with each eyeball in an attempt to get a picture with some depth to it (which is a technique called stereoscopy or steroscopics.)

Anyway, though this was a pretty fun gimmick (and one seen elsewhere in other magazines) there were some other things that caught my eye in this issue, so to speak. Let’s go! 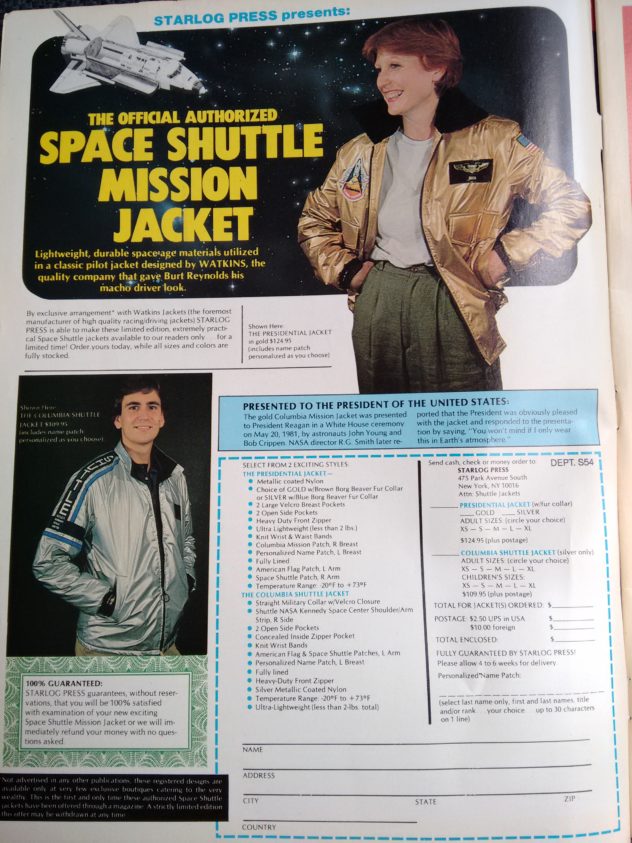 Okay, I know that I have focused on a lot of the fashion-based advertisements and merchandise in previous posts – but c’mon! Look at these Official Authorized Space Shuttle Mission Jackets! Now you too can own a jacket that has been designed by the same company that gave Burt Reynolds his macho driver look! You could even pretend that you were Burt himself while you wore it – only in space maybe!

Everything about this ad just scream screams “authenticity!!!”; not only were these jackets designed by WATKINS, they were also presented to the President of the United States and came with a 100% satisfaction guarantee!  You’d be sucker if you didn’t cut out that form and run like Bandit to your local post office. 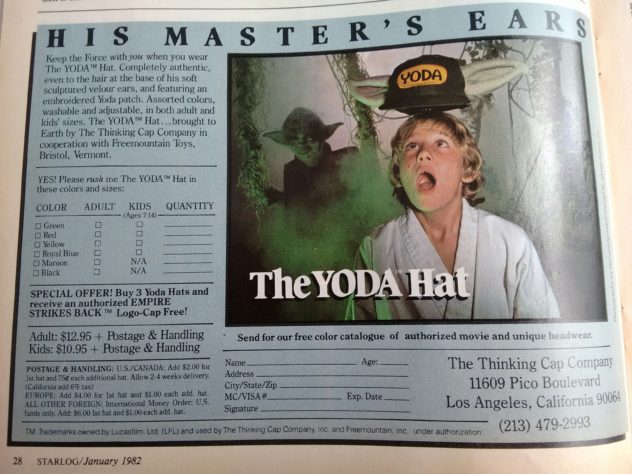 Speaking of merchandise: Wow. Just, wow. With Star Wars on everyone’s mind now that the Force Awakens trailer is out there, I couldn’t help but pull a few Star Wars related items from this issue.

First up, this thing. This is the kind of thing I love stumbling upon when reading back-issues of Starlog. First of all, it’s called His Master’s Ears. I love this already, but The Thinking Cap Company didn’t stop there, they made sure to clarify by including a huge embroidered YODA patch on the top – you know, just in case the ears didn’t tip your friends off! I also have to point out that this is another authentic!!! product, as the copy boasts how well they’ve rendered “the hair at the base of his soft, sculptured velour ears.”

I don’t know why, but that sounds gross for some reason. Finally, what is wrong with that Yoda in the background, OH MY GOD! 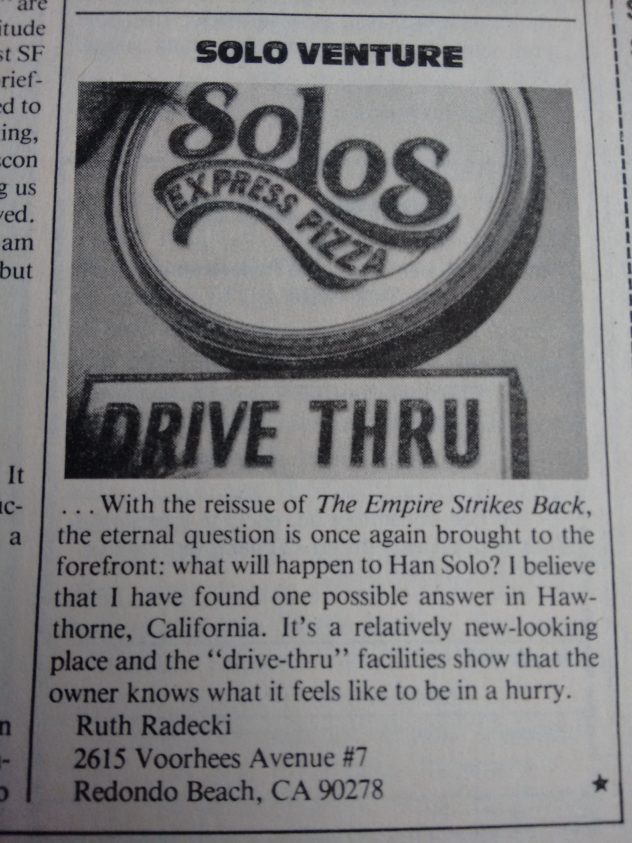 My other Star Wars pull comes from the letters section of this issue. In this letter, titled Solo Venture, one reader delights upon finding this pizzeria with the name “Solos” – you know, like Han Solo! Just to be clear, I’m not going to rip on this reader/writer-inner or something here. I think it’s goddamn delightful that someone saw this place, took a photo, sent it to Starlog, and it got printed. I love that even the smallest, most random expression of fandom like this was shared to the magazine’s readership. It’s great. 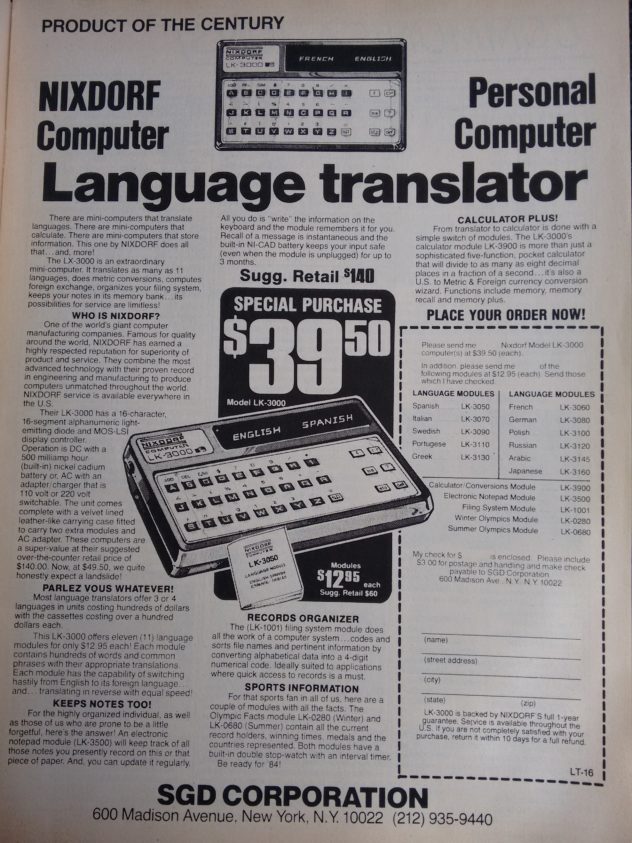 Holy shit, it’s the Product of the Century! The hilariously named Nixdorf Personal Computer did it all – as long as your “it all” mostly includes translating three or for languages, organizing records, taking notes and keeping sports information.

But to be serious, that’s a mean little machine – technically a programmable calculator that utilized cartridges – for its age. It’d probably have been pretty impressive to whip this thing out when calculating a tip or doing a quick translation.

Nowadays, we all whine about bar-fights being over with a quick Google, but I like to imagine a few nerdy arguments over some “sports information” or foreign words ended quickly with a trusty Nixdorf! 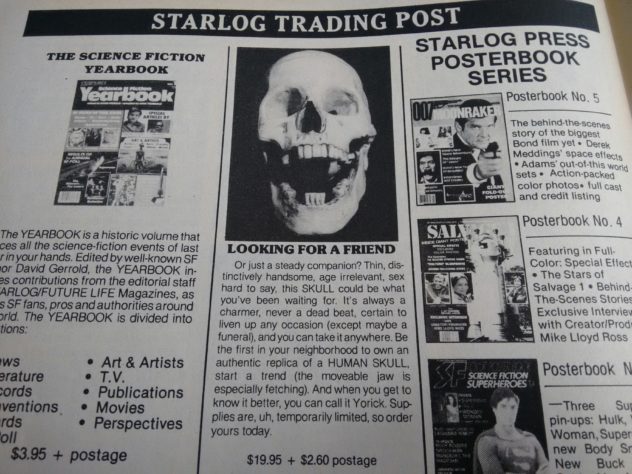 LOOKING FOR A FRIEND 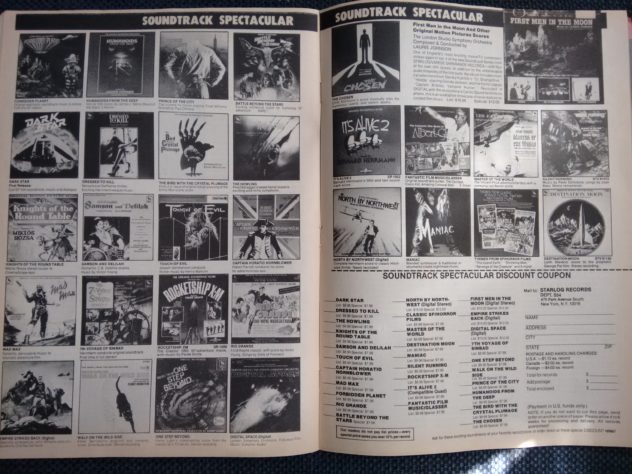 Check it out, it’s like Columbia House for nerds! The Soundtrack Spectacular pages would allow anyone to order – at a discount, no less – some seriously killer soundtracks. Check out that gnarly Maniac LP – whodathunk that years later it would be re-released Mondo and I would personally own a copy? Part of me almost wants to cut this thing out, fill it in, and give it a whirl. You never know! Maybe they’ve got a dusty stack of these records somewhere. Hey, I can dream.

If I were to go back in time and order off this slip, you know I’d be snagging up the Maniac soundtrack – so many synths! – as well as It’s Alive 2, The Howling, Touch of Evil, The Bird with the Crystal Plumage, and some others.

Which records would you jump to order – let me know in the comments! 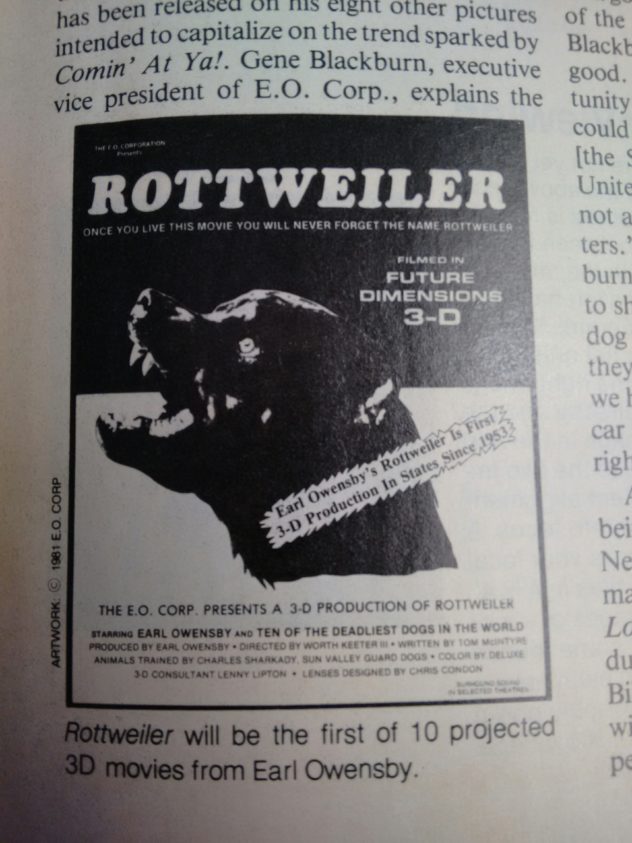 Clearly, this magazine had a section devoted to 3D photos and films, and this miniature advertisement for Rottweiler stood out to me for some reason. I love that they tout ten of the deadliest dogs in the world star in the picture and that the third dimension was one of the future dimensions! Whoa, intense. Plus, if you’re someone who remembers the name Rottweiler, then maybe you’ve lived through this movie! Classic. 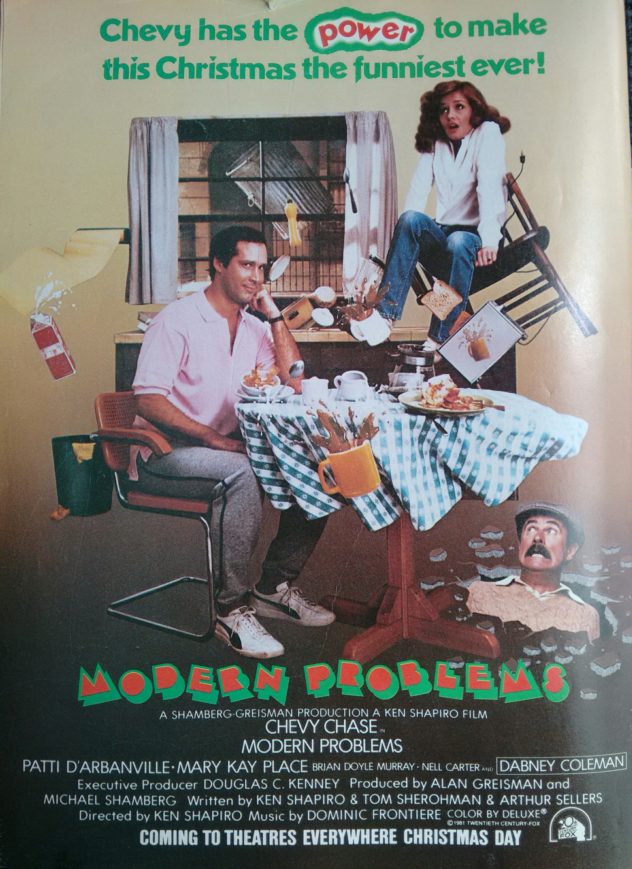 Finally, here’s a poster for the Chevy Chase film Modern Problems from the reverse of the magazine. My favourite thing about this poster – aside from the thoroughly 80s font treatment which I unironically love – is that Dabney Coleman is doing the “Hey, I’m in this movie too!” pose. It’s like they designed the poster, and then at the last minute remembered that he was in the picture as well. “Uhh, I’ll just have his head bursting through the floor making an ‘oh no!’ expression, that’s good enough right!?”

For all I know, this could happen in the film. I haven’t actually seen it – though it’s long been on my list of comedies to watch, if only by virtue of how bizarre I’ve heard it is. This film landed in theaters a year after Caddyshack, and a couple of years before Vacation would become a huge hit – unfortunately, as far as the general critical consensus is concerned, this film is not some hilarious transitional piece between the two but instead was a mess of a film that still managed to find an audience and make solid box-office returns.

And with that, we’ll end another round of The Starlog Files. Don’t forget to toss your own thoughts – or even memories if you have ’em – on these pieces into the comments below.