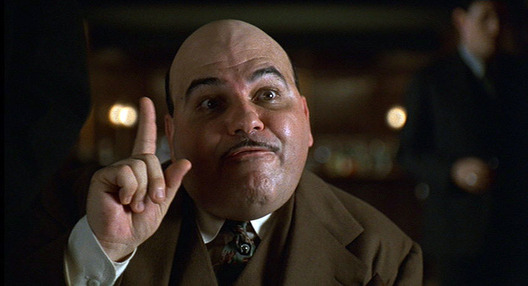 The Coen brothers are nothing if not consistent. A near flawless track record full of wit, violence and beauty complimented by an ever growing stable of actors to deliver the stunning and unique language that inhabits their many worlds. Almost every one of these worlds is marked clearly by the central character and the tone is set by the choices he or she makes. As much of an ensemble the cast may be, there is always a single person at the helm guiding the other characters and the viewer through the tale. Whether it’s Frances McDormand’s unflappable Marge Gunderson or Tim Robbins’ starry-eyed Norville Barnes, these centerpiece roles define the emotional steadiness and metaphoric journeys of their films. Miller’s Crossing is no different.

The Coen’s 1990 gangster epic is set in prohibition-era America. The Irish and Italian mobs handle bootlegging and fixed boxing matches under a peaceful but tenuous relationship. When a disagreement arises over the fate of a loose-lipped bookie, Tom Reagan (Gabriel Byrne) advisor to Irish mob boss Leo (Albert Finney) finds himself in the middle of a pending gang war. The situation is made all the more difficult by the fact that he’s struck up a romance with Leo’s girl, Verna (Marcia Gay Harden).

With it’s dabbling in Film Noir and healthy dosage of Dashiell Hammet, coupled with Barry Sonnenfeld’s gorgeous cinematography, the stage is set for one of the most unique films of an over-stuffed genre. At the center of it is Tom Reagan, one the most understated and complicated characters the Coen’s have ever concocted. Tom is the right hand and advisor to mob boss Leo, he is also a habitual gambler who drinks too much. Leo continuously offers to help settle Tom’s debts, but he refuses as he prefers to handle his own affairs. When the beatings that come with owing money to the wrong kind of people find their way to him, he accepts them without complaint. He has the look of a classic gangster, but none of the common traits. He’s not a tough guy, in fact he gets roughed up more than any lead character I can think of and never seems to land a punch himself. There are many memorable character arcs in mob movie history; the corruption of Michael Corleone’s spirit, the cautionary rise and fall of Tony Montana or the searing madness of Cagney’s Cody Jarett. It’s a tall order to find a new way of looking at the mob story and even harder to find a unique vessel for that story.

We are given the themes of friendship, character and ethics off the top of the film by Johnny Casper (a pitch perfect Jon Polito) in his plea for the ok to take out the bookie. These themes are integral to the make up of Tom Reagan, however we are left in the dark as to the value of, or on what side Tom’s feelings are on those themes. He is a mystery in rumpled clothes and a nice hat. He has a personal code he follows but never reveals. He plays friends and foes and lovers against each other, sometimes it appears to be for their own good, sometimes for his. As the story unfolds the audience is at the mercy of Tom’s silent motivation.

Tom is a gambler, but not strictly with cards and horse races. Once the threat of gang war appears, Tom begins to play a high stakes game in virtually every scene. He reminds us a few times that he can see all the angles, and this gift allows him to risk the house at every turn. As the story unwinds, Tom finds himself calling bluffs and raising the stakes, pushing more into the unseen pot. It’s a game only he is aware of. Sometimes the ante is taking a beating, sometimes it’s breaking a friends heart. He plays it cool and emotionless- for the most part. Once he lets his heart slip into it, for one moment, he nearly loses his grasp on everything. It also snatches the rug out from the viewer. Once Tom looks into his heart, and is forced to change the hand he’s playing- the results for the viewer are captivating. When he is asked to look into his heart a second time and his reply is simply “What heart?” the results are devastating. We are allowed a look at the gambler when he stumbles, when his poker face breaks. You see the Tom that has amassed sizable debts, you see a man whose bluff has been called.

Miller’s Crossing is the Coen brothers at their very best. A complicated story about complicated people with complicated desires told with ease and style. Gabriel Byrne carries the film with a delicate confidence, creating a cryptic character that is both cold and sympathetic at once. Watching Tom dissect the angles of friendship, character and ethics and playing them against each other is a fascinating experience. We are left to ponder his motivations, his destructiveness and his unexpected mercy. We are left wondering what was behind his long gaze at the end of the film.

Miller’s Crossing will be playing on Friday, November 30th, at 6:30 TIFF Bell Lightbox presentation of Joel and Ethan Coen: Tall Tales; a ten film retrospective of the work of the Coen brothers. Go to tiff.net for additional information.