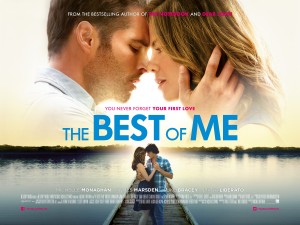 The name Nicholas Sparks had not really entered my sphere of cultural awareness until fairly recently. Oh sure, I was aware of The Notebook as a reference, though I was never sure if it was being referenced derisively or not. There was really no call for me to know who Sparks was or what he did and I was fine with that. But since I started co-hosting a podcast where fate forces me to see many genres of film from which I would normally steer clear, Sparks has become a familiar punchline. And with good reason, it is SUPER fun to rip on this stuff. Nicholas Sparks employs little in the way of subtlety. He is kind of like the Michael Bay of melodrama; everyone is dying of cancer, crashing cars, being forced to choose between their rakish ex-lover and their comically detached husband and doing it all while simultaneously crying in flimsy shirts in the rain. Oh, and also sometimes there’s a ghost!

So yeah, these films are easy targets to say the least. But come on (and I’m talking mostly to myself here), is it really fair? These films are relatively cheap to make, they always promise a healthy return (although The Best of Me is his lowest grossing opening weekend yet) and, most importantly, his audience loves what he does. I’ve heard criticisms of his movies (and the like) that they are poisonous to our cultural landscape, dumbing us down with easy manipulation and making things like character development and engaging dialogue unnecessary and alien. Is Nicholas Sparks a threat to our delicate sense of artistry?

I won’t belabour the plot too much, except to say that the film splits it’s time between two time periods: 1992 when our lovers first meet (you can tell it’s the 90’s by the use of songs like The Spin Doctors’ Little Miss Can’t Be Wrong and The Gin Blossoms’ Generic Gin Blossoms Song) and present day. Dawson (Luke Bracey/James Marsden) is from the wrong side of the tracks; a loser from a violent family of white trash psychopaths who beat each other up and resent him for being smart. Amanda is a girl from a rich family who has zero other character traits. They form a love based on a mutual friendship with a cranky yet wise old man (Gerald McRaney) who they befriend and who takes Dawson in when his father threatens to kill him. Cut to present day, the lovers have gone their separate ways, she is in a loveless marriage and he is working on an oil rig. They’re brought together by the death of cranky old Gerald McRaney and now must decide whether they are meant to be together or if it’s better to stay in your unsatisfying life and live out your days in a disappointing haze of unfulfilled dreams. BUT WHICH WILL THEY CHOOSE? Buy your ticket to find out.

What struck me most about my viewing experience was the rest of the viewing audience with whom I shared the auditorium. A surprising number of them were just openly engaging in conversation throughout the movie, though not about the movie itself. Topics ranged from what Susan said to her boss at work today to why Michael is such an asshole all the time (both actual conversations I heard). Those who weren’t talking incessantly didn’t seem to mind those who were. And yet, despite the constant distraction, everyone seemed to know exactly when to react to something that was happening onscreen. It kind of sounded like this:

‘So anyway Susan told her boss she couldn’t get the report done that day because- HAHAHAHA! -she had an appointment in the afternoon and he totally bitched her out which was- AWWWWW !-bullshit because he leaves in the middle of the day all the time for-OH MY GOD, NO WAY!-his kid’s stupid karate lessons and shit!’

Okay so I’m paraphrasing here but I’m not actually that far off. It was like they’d gotten together beforehand to rehearse the whole thing and it amused me greatly. After the movie was done I the general consensus I overheard was largely positive. No one was criticizing the hackneyed writing, the stilted characters, the obvious plot devices; in fact the only criticism I heard as we shuffled out of the theatre was that one woman thought the main girl was ‘kind of ugly’. Otherwise a good time was had, people were made to feel the ways they wanted/expected to feel and in the end I guess the whole thing was worth the price of admission.

Will Nicholas Sparks bring about the end of legitimate film with his brand of easily digestible, paint by numbers emotional manipulation? Anyone who has seen this years crop of ‘intellectual’ fare (Under The Skin, Only Lovers Left Alive, Calvary) are probably not too worried about it. And the others, those who just want to go to the movies and see an explosion, an impassioned declaration of histrionic love in a rainstorm or an idiot get hoofed in the nuts and fall down, well they’re well represented too. Neither is a better movie watcher than the other. Two different experiences, one ultimate goal of being entertained for an hour or two.