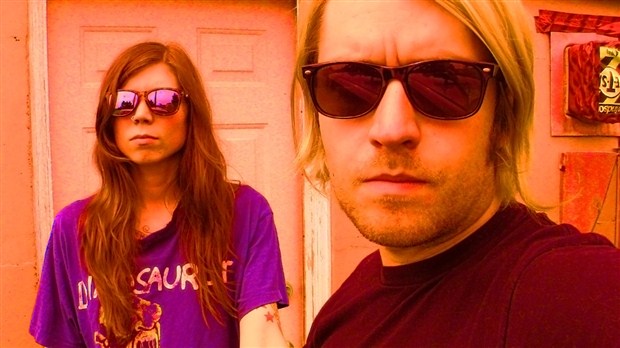 Anyone who knew me when I wrote for Two Way Monologues back in the day knows how huge my love for the band Cursed Arrows was. The discovery of their music was one of those moments where the exact thing you need enters your life at just the right moment – from their debut  album (released as Arrows) to their follow-up Telepathic High Five and through to career swan song Sonic Union, their music affected me on a personal and emotional level. I wore that red Cursed Arrows shirt until it was tattered and shredded – and I still wear it around the house to this day.

Though the band broke-up, they live on today as Bardos – crafting music in a decidedly more punk-rock vein, though the duo are as vital as ever on the album Stolen Sex Tapes. Today, I recieved an email from Bandcamp, notifying me that Cursed Arrows have a new album of covers titled Couvre Projet. You see, just before the release of Sonic Union the band crowd-sourced funds and in return offered to cover songs chosen by the financial backers themselves. Now, these songs have been collected on the aforementioned album.

From long-time staples of their live show (Elliott Smith) to the idiosyncratic (Townes Van Zandt), these covers offer a glimpse into how diverse Cursed Arrows’ sound really could be – all while functioning as a two-piece. They tackle some classics (“Psycho Killer”), as well as add a hefty dose of atmosphere to Hall & Oates’ She’s Gone, which is embedded above.

Head on over to the band’s Bandcamp page to hear them all, as well as toss the band a few bucks through their Pay What You Can digital download.