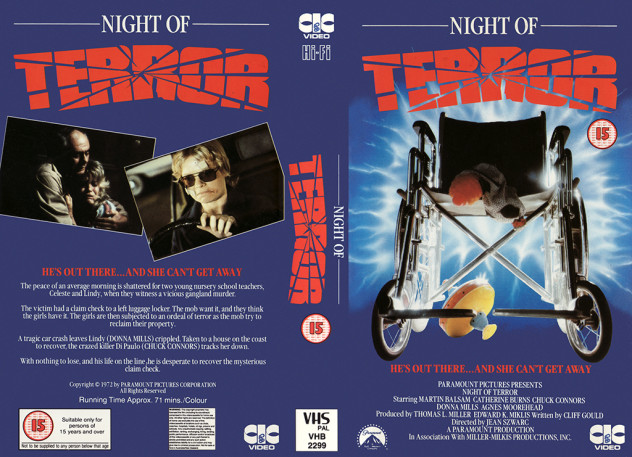 To go along with my recent obsession with made-for-TV movie-of-the-week programming (particularly of the early- to mid-seventies), I’m going to try and keep up with some reviews of notable titles.

Night of Terror is an ABC Movie of The Week thriller starring Martin Balsam, Donna Mills and Catherine Burns, which opens with Linda (Mills) and Celeste (Burns) teaching an art class in their apartment when just outside their door, a drug shakedown takes place. The intended victim yells out, and Linda goes to the door to see what’s up – which turns out to be a huge mistake. The victim gets tossed down a stairwell, and the bad guys seem to think that he hid something in their apartment.

After being followed everywhere they go by shadowy figures, Burns and Mills get into a car accident – leaving Celeste dead, while Linda is left severely injured and wheelchair bound. Capt. Caleb Sark (Balsam) sneaks Linda out of the hospital in a pseudo-witness-protection style move, and takes her to his beach house in time for one final confrontation with the drug dealers.

I had high hopes for Night of Terror, as like many made-for-TV flicks, it has a great concept with a solid hook. The flick is mostly passable though, and unfortunately dragged down by the kind of over-blown dramatics that would come to be expected from spoofs of material from this time. There’s a few especially puzzling and unintentionally humorous eyeball-reactions and audio dubs (especially one character in the opening scene.)

Much has been said elsewhere about Mills’ performance here – as she would later go on to work on Play Misty For Me with Clint Eastwood – but I was sad to see Catherine Burns disappear early on in the film. Her performance and character – who initially believes the baddies have left something in their apartment, and is seen wrestling with stress – seemed much more interesting to me than Mills did.

That said, the picture won an Emmy for cinematography, and there are a few striking shots mixed in there for good measure that make a good case for the win; there’s some great long-dolly shots – one in the hospital that makes the intention of the scene overly obvious, but hey, it looks pretty dang nice!

Overall – aside from a couple memorable moments – this one drags on a bit in the middle stretch and just generally doesn’t muster up all that much interest until the finale, by which point some viewers may have already checked out. Middling, but not a total waste of time.