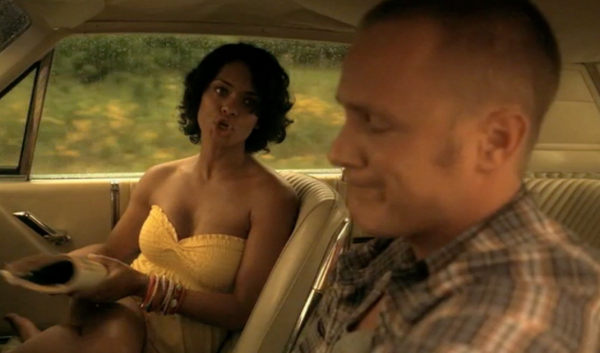 I’ll admit right off the bat that I’ve never seen the original Children of the Corn. Based on Stephen King‘s novella of the same name – originally published in Penthouse, according to Wikipedia – the 1984 film starring Linda Hamilton was critically slammed, to say the least. Over the years, it’s reputation has certainly warmed up – at least within the horror community and when compared to some of the later sequels. So when Stacie Ponder – of the amazing blog Final Girl – revived her Film Club and picked the Children of the Corn re-boot (re-adaptation?) from 2009, I figured it’d be interesting to take part as someone who has never seen the original.

Directed by Donald Borchers – a producer on the 1984 Children of the Corn adaptation – the 2009 version attempts to right the wrongs that ol’ Donald saw during the production of the original film. Yes, this is another Stephen King do-over, not unlike Mick Garris‘ Shining miniseries from 1997. The difference here, is that Stephen King didn’t want any part in the production – despite his receiving an on-screen writing credit on the copy I watched, only adding to my confusion.

After a quick opening featuring some hilariously terrible children yelling “praise the lord!” – establishing that a) they’re crazy and b) they’re going to kill anyone over the age of nineteen – we cut to twelve years later. The story follows Burt (played by David Anders) and Vicky (played by Kandyse McClure who is channeling some serious bi-polar vibes here) as they argue and scream at each other while driving across the country to get a divorce. Actually, Wikipedia tells me they’ve just celebrated their second honeymoon, but I have trouble believing that they’re headed anywhere but splitsville.

Seriously, I’ve never spent 90 minutes with two characters more unlikable in quite some time. Pretty much every scene involves Vicky screaming at Burt about how he has changed since the Vietnam war, followed by Burt either slapping her, or leaving her alone while kids scurry about in the background. Burt and Vicky are like the two characters you kill off in your opening scene before moving on to the real protagonists – only that never happens and you’re left to suffer through 85 more minutes with them.

Anyway, they are hollering at each other about something when a child with a slashed throat wanders into the road and Burt just plows right through the kid with his station wagon. This part was amazing, and I don’t know what it says about me that I wanted to re-wind that scene and watch it over and over. I should maybe look into that.

Burt does what any sane person would do, and wraps the kid in a blanket before shoving him into his trunk. After realizing that the child’s throat was slit, he wanders into the corn and finds a bloody suitcase. Vicky isn’t too happy about this, and is pretty vocal about not wanting the suitcase in the car. Then, they decide to drive to the nearest town in order to give the corpse to the local authorities. On their way there, Vicky manages to pry open the suitcase and finds a Blair Witch lookin’ corn sculpture with a big smiley face on it, for some reason. Donald Borchers probably thinks that the juxtaposition of innocent looking smile on the creepy corn-husk creation will play as upsetting, but ultimately it’s just silly. Burt thinks that it might be worth keeping around as evidence, but Vicky screams at him to throw it out of the car. Awww, young love! 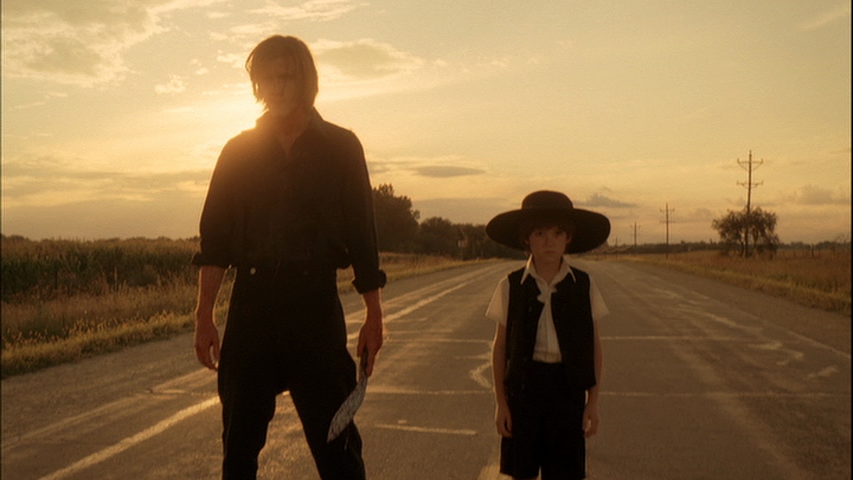 The roads that day were unfortunately underpopulated – would have made for a shorter movie.

Okay, I’ve gotten a little ahead of myself with the Burt and Vicky stuff  – so let’s get to the titular children. They’re all huddled in the corn now, listening to Isaac and Malachai – the cult leader and main minion, respectively. Isaac is regaling them with the story of Burt and Vicky running down that kid earlier, and stating that they must be murdered in order to appeal to “He Who Walks Behind The Rows” – which is supposedly the god that they worship who told Isaac to kill the old folks. The kids have most recently murdered and crucified a police officer, which they keep referring to as “The Blue Man” – further reinforcing that these kids are either complete doofuses or huge fans of The Blue Man Group.

Eventually, Burt and Vicky make it to the town of Gatlin – “Home of the nicest people, anywhere!” the sign-post claims, forgetting to mention the group of murderous children that also call Gatlin home. Burt leaves Vicky in the car while he goes and roots around in a Diner or something. I think he stumbles upon some key information in there, but I wasn’t paying close attention – probably something about how nothing has changed in 12 years, thus finally tipping him off to the fact that something is amiss (despite Vicky having been screaming that directly at his face the entire film). Burt isn’t exactly the sharpest cob in the cornfield.

While these gears grind away in Burt’s brain, Vicky is getting surrounded outside by the corn-cob gang. Isaac is directing the kids from a near-by roof, instigating the proceedings via Siskel & Ebert’s patented thumbs-up or thumbs-down method. I guess they didn’t have any coins to flip? Vicky unfortunately gets a thumbs-down (Probably due to her grating performance? Who knows, Isaac isn’t exactly in a talkative mood in this scene) and the kids start bashing away at the car. One of them scratches the side of the car with his pitchfork, which is totally like keying a car eight times in a row, you guys. That shit isn’t going to just buff out! The best part of this scene is when Malachai busts a hole in the windshield and rips it out with his bare hands – only to be greeted by the business end of Vicky’s shotgun. Malachai ducks out of the way, just in time for Vicky to blast a hole through the kid who was standing behind him. Dick move, Malachai.

Burt must need a hearing aid, because through all this kerfuffle he hasn’t heard a single thing. Finally, he stops playing Hardy Boys and comes outside, just in time to see the car go up in a ball of flames – killing Vicky. When this happens, Burt lets out one of the most underwhelming Noooooooo‘s I’ve ever seen. It’s hilarious – his mouth barely opens for some reason. The kids chase Burt into an alleyway, where he finally decides to fight back.

Burt is cornered, giving Isaac time to spout some bullshit from the rooftop before giving Burt the thumbs down too. A kid with a mini-scythe of some sort attacks him, but Burt snaps his wrist in two – shooting the kid’s bone straight through the skin. That was fucking great, it was like a scene in Commando or something. To add insult to injury, he also decks the kid right in the face – as if snapping bone through his skin wasn’t enough.

Burt runs away and heads into the cornfields, where none of the average kids will follow him – as it’s where “He Who Walks Behind The Rows”… walks… behind the rows. Isaac and Malachai show up, and now lead the children into the corn to search for Burt – but they must find him before dark, as that’s “He Who Walks Behind The Rows’ time”. Time for what? Maybe he turns into “He Who Gets Liquored Up And Needs Some Alone Time” or something.

This is probably my favourite part of the movie, right here. Burt is currently losing a lot of blood from his run-in with the kids earlier. This causes him to start hallucinating in the cornfield while the kids are searching for him. Burt starts envisioning the children as the Viet Cong from his days in the Vietnam War, so he starts taking them out one-by-one – war style! It’s bananas – I couldn’t believe the movie was actually going down that road, and yet, there it was happening in front of me. 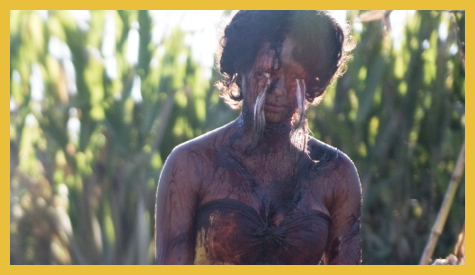 Artist’s rendition of what I wanted to do to my eyes after watching a bunch of kids cheer on some bone-zone action.

Meanwhile, Burt is just stumbling around the corn rows, where he ends up finding the Blue Man and Vicky – both of whom have been crucified. Vicky wakes up and starts talking to Burt, saying things like “Hey Burt!!!” and “Being sacrificed by pagan children in the corn ain’t so bad! Join me!”. That’s not a joke, she literally says that, and it’s an attempt to be creepy. At this point, we’re supposed to believe that “He Who Walks Behind The Rows” rips out Burt’s eyes and guts him, but what actually happens is this: Burt screams and the camera zooms into his mouth. So in all actuality, he probably died from trying to eat a really big camera in an attempt to make this shitty movie end, already.

All that’s left is the denouement where the kids all burn the bodies with some corn – probably because they want to dispose of the bodies, but also feel like making some tasty popcorn.

This movie was like a huge, heaping pile of rotten corncobs. The kids aren’t creepy at all – at least in Children of the Corn III: Urban Harvest (the only other film in the series that I’ve seen) they had kids that were committed to the overbearing priest mentality of their characters. Preston Bailey – who plays Isaac – seems content to just shrug his way through the dialogue, not fully understanding what he’s actually saying. The lines between him and Malachai are supposed to fill in the plot with details of their cult, but are borderline incomprehensible when delivered by these young actors. These characters are supposed to be scary and off-putting but their dialogue hits the screen with a dull thud- there’s no energy or menace.

As I mentioned earlier, Burt and Vicky are annoying as hell for the entire picture. Vicky walks the line between unnecessarily screaming nonsense and actually making legitimate points – as she’s the only character who insists again and again they should just leave. Burt is hellbent on figuring out what’s going on even after it’s painfully clear they’re in a town full of murderous children.

There’s so much more to this movie that I haven’t even touched upon – like stupid CGI knife throwing! – but there’s just too much outrageous garbage to mention in one already overlong review. Also, you can really tell that this thing was a SyFy original by the way it drags certain scenes on and on, when it doesn’t really need to. Children of the Corn (2009) gets one and a half corn-cobs out of five for some of the hilariously stupid events – but ultimately it’s too boring to reach a so-bad-it’s-great level of entertainment.

If this re-adaptation was an attempt to right the wrongs committed by the original adaptation, I gotta say, I’m scared to watch the original.