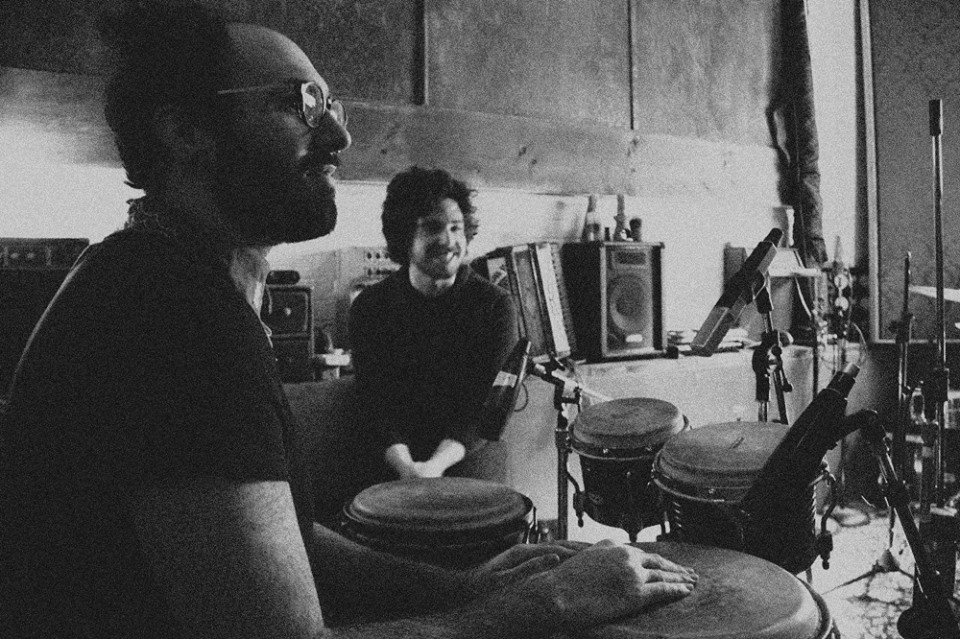 It was a particularly frigid evening when a friend and I approached Saving Gigi on Bloor Street for an evening out. I was previously unfamiliar with The Holy Gasp, but after viewing this video of the band performing live, I immediately agreed to check them out. Their set more than lived up to my expectations, deftly yet energetically hopping between everything from angular surf/new-wave guitar attacks to psychedelic tinged, upright bass lead conga freak-outs. When vocalist Benjamin Hackman stepped out from behind his percussion set-up, he took to the task of loudly labeling any of us still seated as “slippery banana peels” and then proceeded to invade the crowd as he stormed into another song. It was certainly one of the freshest and most exciting live sets I’ve seen in a while.

I was a little let down when I found out the next day that no recordings of the band – as a five-piece – existed yet. I say this not because the earlier recordings as a straight percussion act weren’t quality – because they were – but rather that I was jonesing for another fix of that energetic collective I had experienced the night prior.

Thankfully, I didn’t have to wait very long for that to become a reality. The Holy Gasp released their Bedbugs EP a week or two later, featuring the infectiously staccato-laden title track and the hand-clap packed, groove-tastic “Stomp Out The Man”. Sebastian Shinwell‘s guitar on the latter is especially great – those long, pre-solo surf bends really hit the spot. The whole band really gels on these two songs – one of those rare occasions where live performance translates almost perfectly to the recorded work. The Holy Gasp are especially tight rhythmically, peppering their songs with stops, starts and inspired spurts of exuberance – though that shouldn’t be too surprising given the groups foundation of percussion work.

To make a long story short, these two tracks have had me hitting the repeat button all week, and I’m beyond excited to see them live again – so make it your business to be at the Smiling Buddha on April 9th!

Benjamin Hackman was nice enough to answer some questions from Modern Superior about the band and their new album:

I’ve read that the original incarnation of The Holy Gasp was a duo – what were the origins of that version of the band?

In actuality, the Holy Gasp started as a one-man conga act. I had just come back from hitchhiking across Canada, WOOFing on homesteads and camping out at Rainbow Gatherings. I was really out to lunch, picking wild raspberries and reciting Keats to willow trees. When I came back to the city I was totally inspired, but culture shocked in a big way. I moved in with my partner who lived across the street from Long & McQuade, and I’d go in every day just to play the electric drums. My own kit was at my parents’ place up in the suburbs, and I was so desperate to be creative. Well one day L&M brought in the most gorgeous pair of congas, and I fell in love. I signed a monthly finance plan, brought them home, and started composing songs on them right away. I had it in my mind that I wanted to play with that old beatnik cliché and see how far I could stretch the aesthetic of some shoeless black-clad addict playing bongo drums in protest of the Man. I came across this poem from High School Confidential. The language just totally turned me on and I wrote Stomp Out The Man after hearing it.

I recorded the first self-titled album at the home studio of Craig Saltz (Crhymes), and brought in Benjamin Reinhartz (Dilly Dally, Beliefs, Neon Windbreaker) to sing backups and play auxiliary percussion. The new sounds seemed to complete the songs, but Reinhartz was too busy with other projects to play with me live, so David Osorio joined and The Holy Gasp became a duo.

When and why did you decide to up the collective to a five-piece?

I felt I had accomplished what I wanted to do with the percussion ensemble. I had more sounds in my head that I wanted to express and I felt the limitations of the congas in a more persistent way with some of the new songs I was crafting. Plus, I was hard at work on a poetry collection called The Benjy Poems<, which gave me that amelodic fix. It was obvious that The Holy Gasp needed to either expand or be put to be bed.

How did you find and recruit the new members of the band?

Craig Saltz introduced me to Sebastian Shinwell (Crhymes, Clarinet Panic Deluxx). Sebastian scored a few poems I had set to music for The Benjy Poems, and he and I just totally hit it off. When we tried to play some of the songs he had scored, it was obvious that he could be that conduit between my brain and a melodic instrument. So I asked him to join.

At the same time, Dave and I were (and still are) playing percussion in Rambunctious, Michael Louis Johnson’s improvised New Orleans-style brass band, where Chris Weatherstone (Lemon Bucket Orchestra) was (and still is) playing alto saxophone. Chris and I really fell in love with each other’s energy, and I asked him to join and he said yes right away.

The four of us started playing together, rearranging the old songs for melodic instrumentation, and it was so clear that it was working, that we had something special, and that we all spoke the same language and understood the aesthetic. But we needed a bass player. I had worked with James McEleney (The Unseen Strangers, A Sondheim Jazz Project, The Andrew Collins Trio) and had opened for The Unseen Strangers a few times when I was still a one-man act. James and I bonded over that beatnik aesthetic. I had it in my head right from the start, even before Dave, that the whole thing would work great with an upright bass. I begged and pleaded and promised him fortunes and eventually James agreed to join the band.

Are things collaborative with the new set-up?

I write the words and music, and work out the whole structure, with most of the parts totally arranged in my head. I try and have a song composed entirely before showing it to the band. Generally, though not always, I show Sebastian the song first; he translates my literary structure into something that makes sense to a musician. Once that’s done, I sing all the parts to the band, and they flush out the arrangements. Chris often spearheads a musical interlude, James and Chris work out vocal harmonies, and Dave and I will get together on our own to flush out drums and percussion, and decide what auxiliary we might like to play with. Once the band knows their parts, I really yield to them on most musical issues, and offer only theatrical and emotional direction. They are all, without exception, significantly better musicians than me, and there is a general motto within the band to yield to the person most passionate. If you’re willing to not back down on an idea, I’m willing to trust your passion. That attitude has proved successful so far.

How was the recording process for the Bedbugs EP? The new songs do a really great job of capturing the sound of the band live – was recording both tracks (at Candle Recording) in a single day a conscious decision to try and get that energetic and frenzied sound out of the session?

The recording process was super simple because we rehearsed the hell out of both songs well beforehand, and worked out almost every detail before stepping into the studio: Who will sing which harmony? Which tambourine will we use? As much as we could. I’m a fickle man, and I didn’t want to immobilize myself with decisions the day of, so I made sure everything was thought out and ready. I said to everyone: “Record three takes and we’ll choose the best of three.” Any more than three choices and my brain explodes. The decision to do it all in a day was mainly a budgetary restriction, though the energetic frenzied sound was very much conscious.

I consulted a lot with Benjamin Reinhartz beforehand about how the recording should sound. He’s like my rabbi for musical endeavours. He’s very wise and I trust him entirely. Early on, we all knew we wanted it to sound as live as possible. We decided to record the whole rhythm section live, minus auxiliary. I listened to a lot of different recordings, and the psychic distance of where the listener positioned her or himself was my highest priority. I didn’t want the music or vocals to sound aloof or too-cool-for-school or like the listener’s only option was to sit cross-legged on a carpet underneath the band. I wanted it to sound like the listener was right in the middle of a virgin sacrifice, part of the ritual, part of the community of sound. I showed Josh Korody Kommienezuspadt by Tom Waits as an overall reference for recording and he knew exactly what I meant. He’s a master at what he does. It’s no wonder he’s so busy.

He put the drums and hand percussion in the live room and put the bass in the vocal booth. We miked the hand percussion but did everything else with overheads to give that big room feel. I wanted the drums to sound vintage, and wooden, with very little compression. We used tracks from Big Band Percussion by Ted Heath as major reference point. (An incredible album, if you can get your hands on it.)

For the vocals, I wanted a demonic sound. With punk undertones and an analog feel. We used Nick The Stripper by The Birthday Party as a reference. Korody fed my vocal mike through a guitar amp and gave it a bit of reverb, and I sang everything in the live room, and let myself dance and bounce off the walls and pull my hair and freak out. It was wonderfully cathartic.

Sebastian and Chris did their parts separate in a few takes; Dave and I overdubbed the auxiliary and the backups were done more or less live.

The title track of your EP, Bedbugs, is an oddly visceral and relateable listening experience – especially lyrically – for someone who has experienced having bedbugs previously. I can only assume it stems from a true experience?

Are there any current plans to record more songs?

Yeah, we should be back in the studio around May, and hope to release an LP around November called We Really Mean It.

What can people that have never seen The Holy Gasp live expect from your April show at the Smiling Buddha?

People should lower their expectations and expect nothing. Life is a terrible journey of suffering, in which loved ones die and all things are irreversible. Don’t come with expectation; come to freak out and get groovy. It’ll be more fun that way – I promise.

Finally, I always like to ask bands to shout out their favourite spot to eat, drink, perform, or hang out in Toronto – go!

My favourite place in Toronto is Saving Gigi, at 859 Bloor. I write there every day – come drop in and say hello. Best Americanos in Toronto!

Thanks to The Holy Gasp for taking time out to do the interview, and please remember to go check them out at Smiling Buddha on April 9th! You’ll be happy you did.