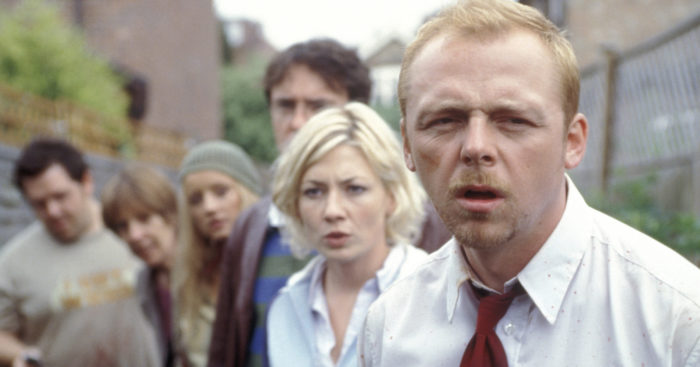 So we take an idea, and dedicate an entire month to it. Then we pop ’round Rogue One, grab Indiana Jones, take care of Leather Face (sorry!), head over to Rambo’s, then sit back and have a Cornetto. How’s that for a slice of fried gold? As we continue our month of Divergence we head from prequels, to sequels, and now on to trilogies! This week we’re looking at a themed trilogy where the only thing that connects its parts is a tasty treat: Edgar Wright and Simon Pegg’s Three Flavours Cornetto Trilogy! We go through Shaun of the Dead (2004), Hot Fuzz (2007), and The World’s End (2013) while discussing what makes these films unique, and what holds them all together as a series. Along the way we discuss which film suffered from the law of diminishing returns, the subtextual issues of masculinity and vulnerability that permeate and influence the entire trilogy, and how thrilled we were that Nick Frost finally got to flex his dramatic muscles.

As Divergent Month continues, we’ll be tackling the joy of remakes next week, and finishing off the month with something completely different. In the meantime, feel free to send us your input and ideas via email at aframeapartcast@gmail.com. You can also connect with us on Twitter, Instagram, Facebook, and Tumblr. Huge thanks again to Eric Stroppel for writing to us on Facebook with an excellent idea for an episode. It will be a part of our August programming, and we can’t wait to dig into it!

Subscribe to the show on SoundCloud, Google Play, Stitcher, or the Pocket Casts app. Of course you can also find us on iTunes, so check us out there, rate, and subscribe to the show. Every subscription helps our visibility, so that more people will be able to find and enjoy the show. Last, but not least, be sure to check out Modern Superior’s Patreon page, and donate to our wonderful podcasting family!

Nick Frost as a romantic lead in Cuban Fury, as discussed in the episode. The flick is still available on Netflix (at least in Canada for sure) so check it out:

And now for something completely different: the Monty Pythom Llamas sketch Ariel’s so fond of: