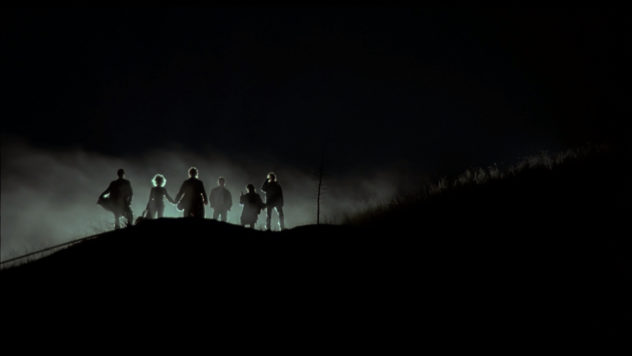 For our last entry in this month’s Women in Horror expedition, we went for a blood-sucking good time with Kathryn Bigelow’s Near Dark and Ana Lily Amirpour’s A Girl Walks Home Alone at Night. Through these two ferocious women of film, we’re discussing something we couldn’t quite put our finger on. We decided to call it accidental feminism – not to be confused with the work of Courtney Reissig. This week we’re discussing the significance of Bigelow’s action chops, Amirpour’s dark, atmospheric filmmaking, and what makes these women significant to the genre. We’re also discussing the giant red “FEMINIST” stamp branded on their work by virtue of simply being a woman.

Labelled a feminist filmmaker in the press, Amirpour has gone on record as saying Girl was never supposed to have a political or feminist agenda – she just wanted to make a vampire Western. Bigelow has managed to evade the same pressures, but by virtue of being a female filmmaker, her work holds profound significance for women in film. So join us as we hash out what makes these women significant for their abilities behind the lens, as well as what their work means on a grand scale, despite their artistic intention.

Speaking of ferocious women, be sure to check out the work of Natalie Zina Walschots. You can find more of her work on Twitter, at The National Post, Exclaim!, The Walrus, or check out her book of poetry, Thumbscrews. She’s been in the Globe and Mail, the Quill and Quire … you name it. She’s a prolific writer, so look and you shall find her phenomenal voice.

Sunday, February 26th are the 89th Academy Awards! So you know what that means? You have nine – count ’em, NINE – days left to pick up a copy of Tina Hassania’s The Critical Press book on Asghar Farhadi. Until Oscar night, all proceeds from sales of the book will be going to the ACLU.

Follow us on Twitter, Facebook, and Instagram! Love what we’re doing? Hate what we’re doing? Want us to try something new? Shoot us an email at aframeapartcast@gmail.com. Tune into the show every week on iTunes, SoundCloud, Stitcher, Google Play, and the Pocket Casts app. Like us, follow us, subscribe, and leave us a review wherever possible. We’ll read them on the show!