If you ask any videovore about VHS cover art, the discussion most frequently encountered revolves around how the detailed illustrations adorning dusty tapes always ended up being more interesting than the movies contained therein. Big boxes sold visions of buxom babes battling machine-gun equipped street toughies, dinosaurs tore the flesh of Fabio-esque hunks, and sub-Rambo heroes brandished shotguns with twelve barrels (for some reason).

And yet, the movies could never live up the the lofty promise laid bare on their covers – usually painted or illustrated in wonderful detail. Yes, this is a story that we have heard time and time again – but one story that receives little visibility is how one major company took a gamble and created a completely different approach to selling their tapes.

The first film I owned on VHS was my father’s copy of Caddyshack released on Warner Home Video in the clamshell format. I watched it religiously; taking it around to each of my friends houses, and poring over every little detail of the tape – from the orange patterned exterior, to the oversized sticker on the tape itself.

I always found Warner clams to be aesthetically pleasing – partly because it’s so clean, straightforward and readable as piece of media, but also because the nature of the gradient lines dancing around the main image is almost hypnotically attractive. They capture that fun, vibrant video essence, but still had class. Warner wanted their clientele to keep coming back, so I think consistency played a large part of the overall aesthetics for Warner Clams.

On the back though, was a six-paragraph near-essay length description and write-up of the film that I read over and over again. What made Warner Home Video’s descriptions so unique, was they not only described the film’s plot (“The greenskeeper is about to start World War III – against a gopher. Insanity? No. Caddyshack!”) but they also were hyper-verbosely written – to the point of hilarity from time to time. Warner certainly did not create the idea of over-promising write-ups, but they certainly perfected the art of it – and pretty early on, too.

The Caddyshack box goes on to describe each of the central performer’s background and history (“Chevy Chase’s laid-back delivery kept Saturday Night Live audiences in the aisles for years. On film, he’s even funnier. Sharing his wisdom with a caddy or his bed with an energetic debutante named Lacey Underall, he never misses a shot.”) as well as fills out space with quotes from the film. This was the tape that began my interest in Warner’s dedication to the art of the reverse-tape write-up. “Who wrote these?” I’d ask myself. Every piece has such a distinct writing style, they seemingly must have all been written by a single person. But with a catalogue as big as Warner’s slate of clamshell releases, could that even be possible?

I can imagine a big boss talking to a new guy like, “Okay, Bill: Joe used to do the copy for our first 15 releases, but he’s currently out to pasture, so you’re the guy now. Joe’s work was perfect; eloquent, vivacious, hard-line marketing in a sweet syllable-packed package. I want you to emulate his style and attack, Bill. It must be uniform. Warner clientele expect quality and that’s what we’ll give them from the packaging to the punch. Ya got it? You got it. Thanks, Bill. Send up this copy before lunch and we’ll review.”

The case for The Nesting describes it as a “Basheroo of a tale about a bordello that became a haunted house” and that “If you like doors that creak and things that go bump – then bash! – in the night, invite The Nesting to settle in to your VCR and have a happy, shudder-filled haunting!” A basheroo? Settle into my VCR? I absolutely love it. Just envisioning someone crafting such an overwrought way to sell The Nesting to potential viewers makes me happy and warm inside. I haven’t even watched the film yet, but I’m already sure it could never live up to the way it has been described to me. 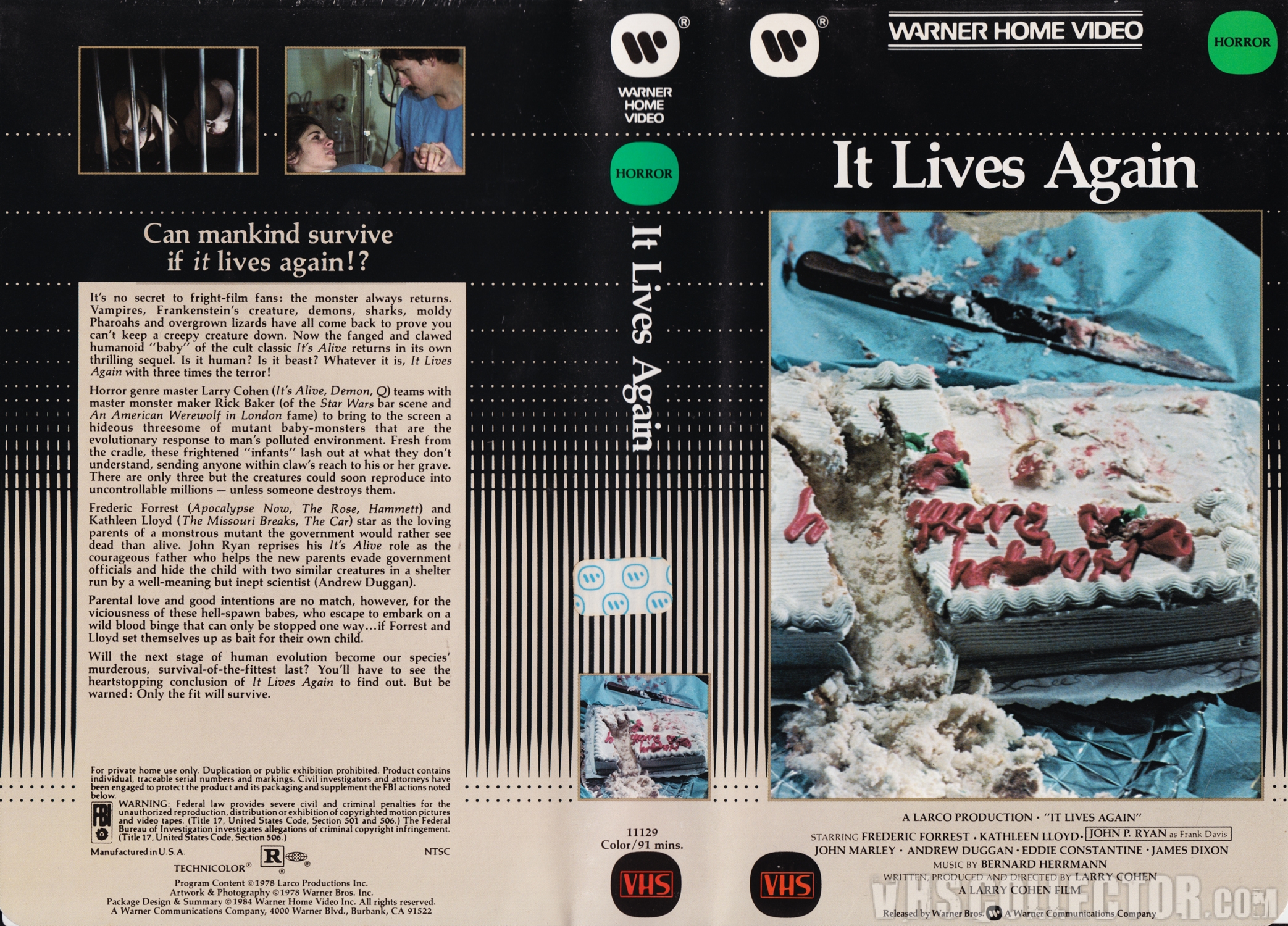 On The Pack, the shell exclaims: “Even the most experienced fright fan is likely to be surprised by the conclusive twist of terror that’s yours for the viewing in this energetic, well-crafted tale of man vs. beast.” Whoa, I consider myself an experienced fright fan, but I don’t know that I’ve seen any conclusive twists in my viewing history! Guess I better rent The Pack!

As for the verbose, overly-done copy on the back, I think they just wanted to grab the reader and since they’re Warner – a top shelf company – they wanted to wow the consumer with their literacy, apparently to a point of ridiculousness.

While other companies were utilizing the aforementioned illustrations to move tapes, Warner were targeting an entirely different kind of customer with their cropped poster or photo-still covers, consistent patterned clamshells and over-long descriptions. Was this a ploy to achieve a collect-ability that other companies had yet to offer, so that tape-hungry consumers could have a library of Warner releases, organized and colour-coded by genre? It is entirely possible. Everything about their cases furthered the idea of a collection – something you would want to browse, taking into consideration the description of each movie, before pulling one out and settling in for the evening. Warner provided the full experience with these releases.

In contrast, Netflix has been selling the act of viewing a film with shorter and shorter descriptions – currently when scrolling through titles you will mostly see a one or two sentence description, enticing you to select the film and see a slightly longer (if only by another sentence) write-up. While I agree that the lost-art of poster and cover design is something to concern ourselves with, I’d personally argue that the lost art of the textual-oversell is similarly disheartening.

Gone are the days of Spatter University’s box telling me their movie may just be more frightening than any real life experience I have ever had, only to pop the tape in and find out it might as well have been written by an eight year old (what with all the victims being goofily stabbed in the buttocks.) It was in this world that Warner reigned supreme, and it disappoints me to see that “Looking for a quirky comedy? You’ve found it!” has replaced an interest-grabbing exclamation that The Nesting will contain things that go bump – then bash! – in the night. Now that’s certainly something I want to see – let’s pop the tape in!

Special thanks to Josh “Lunchmeat” Schafer for his quoted contributions to this piece.