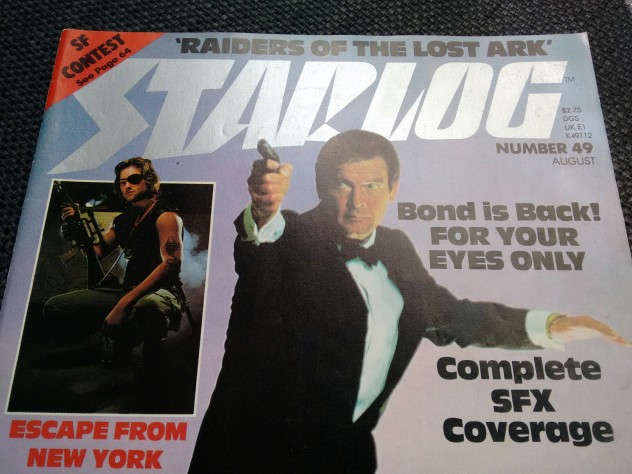 About a year or so ago, a good friend of mine handed off a stack of Starlog magazines to me and every once in a while I will pull one off my shelf and peruse it. Many of these issues feature some of my all-time favourite films adorning the covers – one featuring Ridley Scott‘s Alien, printed just after the film’s release, and has a some fascinating reader-reactions in the mail bag section.

Aside from reading though the absolutely wonderful reports about movies I already know and love, I often find myself fascinated by the smaller details: odd advertisements, posters hyping upcoming films, mail-order listings and more. Here are just a few that caught my eye in Issue #49 from August, 1981 featuring a “Bond is Back! For Your Eyes Only cover.

Necronomicon: The most incredible book of all time!

Oh man! Limited edition (of 2,000), this “long-lost sorcerer’s handbook” will be familiar to anyone who knows their H.P Lovecraft stories, as well as any Evil Dead fans. Lovecraft himself wrote a partial-history of the book in 1927 – which was not released officially until 1938 – and the book is mentioned in many of his own stories, as well as a number of oft-referential horror flicks (such as the aforementioned Evil Dead, plus Equinox, The Dunwich Horror, and more.)

Though the book was entirely fictional, as admitted by Lovecraft, that didn’t stop anyone from producing and selling these recreations as fact; many of these reproductions are said to be based more on Sumerian mythology than anything else.

My favourite thing about this ad is the full-colour photography – not only is the book floating about in space, the magic crystal ball just seals the deal. I can’t believe they weren’t selling these crystal balls as an upgrade-combo with the book – what a missed opportunity! Also: it’s “equally as magical in appearance as in content!” Ooh, fancy. 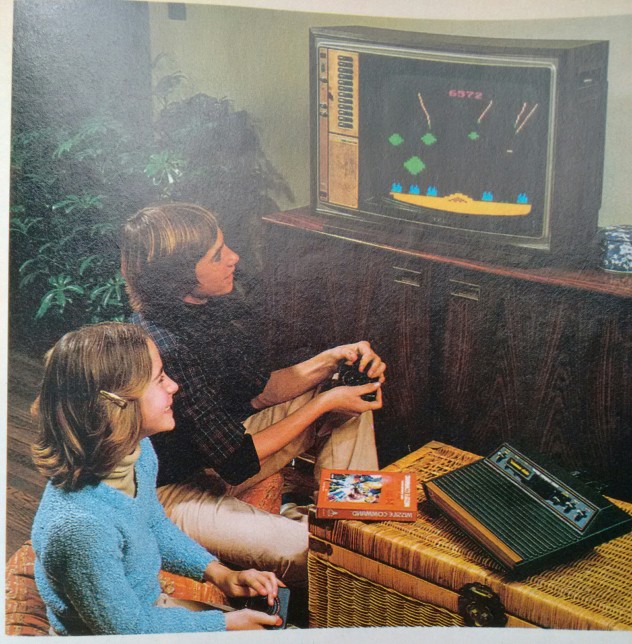 I am mostly including this one because I love this living room – the huge television, the woven rattan chest, and the (potentially plastic?) greenery in the back corner. As far as I can remember though, Missile Command was a two-player game in turns only, so no idea why they’re both having that much fun when one of them is literally controlling nothing. 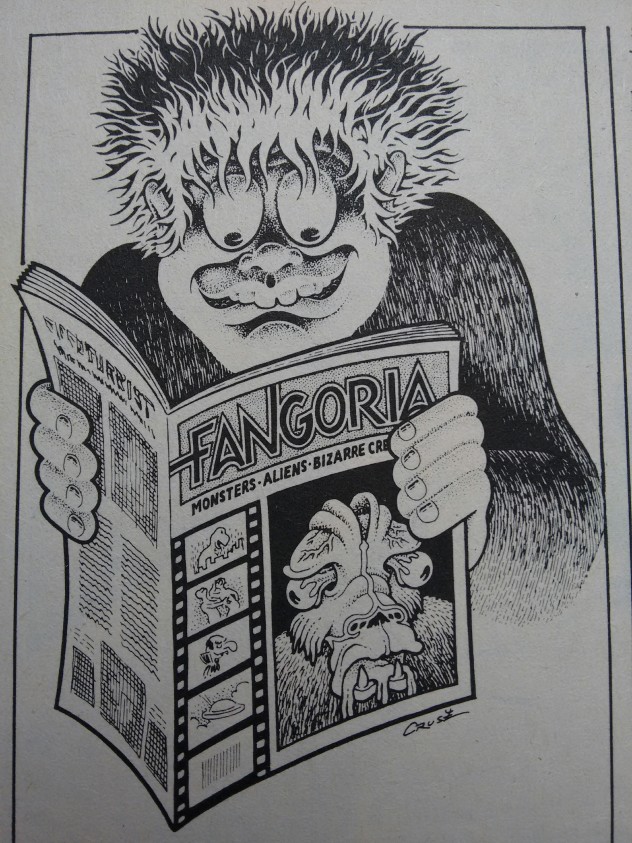 This illustration is phenomenal! When I think back to the (admittedly few) monster magazines I had gotten my hands on as a young kid, I picture myself just like this – permanently hunched over in excitement and fear at the reading material. Though, to be honest, I was also probably listening to an Ace of Base cassette passed down from my sister to my brother and then to me, so in that case the illustration totally fails to realistically reprodouce my childhood experience.

I love this fictional issue of Fangoria that is illustrated as well – I can see a Godzilla-esque frame in the top left, a cheap-o UFO at the bottom, some kind of big-nosed Dracula just above this, but what’s that right above? Are those people fighting? Hugging? Kissing? Hug-fight-kissing? No idea, but the monster created for the cover-story is bad-ass – it’s like every awesome monster ever dreamt up all rolled into one – with bonus drool! 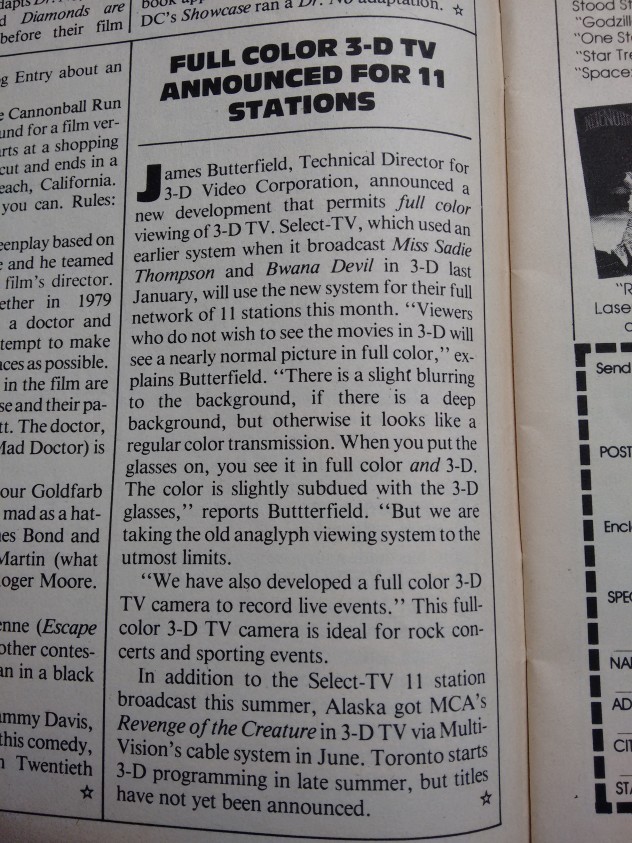 Though there are still only a small number of dedicated 3D television channels currently, it’s pretty interesting to see this time capsule of a blurb from August 1981 boasting that 3D broadcasts are coming soon (and to Toronto, specifically!)

I like how they go on record saying that if you don’t have the glasses, you can still watch the channels but with “slight blurring to the background.” The concept of watching a 3D signal without glasses just does not sound appealing at all, I mean, have you ever taken your 3D glasses off at the movies? Yeah.

Funnily enough, though the channels clearly didn’t take-off entirely, you may remember a brief 3D television fad in the mid-nineties, with shows like 3rd Rock from the Sun, Ellen, Family Matters, Step by Step and more airing special depth-enhanced episodes. I vividly remember going out to get my glasses for the 3rd Rock episode (“Nightmare on Dick Street”) where a number of the characters had surreal 3D dreams throughout.

I can only imagine what kind of insanity Family Matters got up to in the third dimension – if it’s anything like the episode where Urkle and Carl got shrunk Honey I…-style in their kitchen and had to sleep on Wonder Bread with a slice of Kraft Cheese as a blanket, then sign me up!

Wolfen is one of those movies that as a kid, I would see again and again in the horror section of my local rental shop but never got around to renting. The VHS cover I remember was different, but this poster from Starlog (and based on the theatrical one-sheet) just straight-up rules.

Even if it wasn’t called Wolfen, it would tell you everything you need to know: creepy eye equals monsters or beasts of some sort, full moon clues you on to the werewolves, and the city-outline let’s you know they’re coming for ya in your own city. Sweet!

Their tracking and hearing strategy though, sounds suspect – it’s like Hey, Wolfens, use today’s shadow why don’t ya? Maybe if you spent more time listening to me instead of tracking clouds you’d have caught me by now! Sheesh.

That’s all for this issue of Starlog, but I’ve got a major stack of these to go through, so I’ll be trying to get more of these up in the near future!

A Nightmare on Elm Street 3: Dream Warriors, with Matt Brown and Dan Gorman