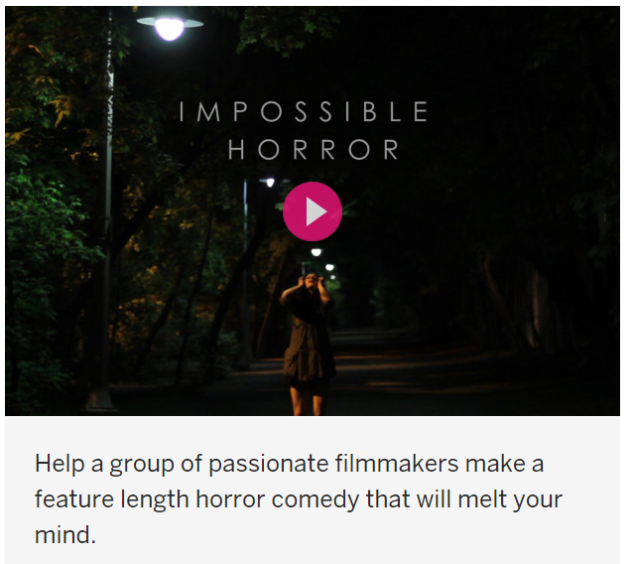 If you’re a fan of low-budget Canadian filmmaking, you’ve likely read the names Justin Decloux and Emily Milling at least once – and probably more than once if you live in Toronto, where they both reside. Justin co-hosts the wildy successful Laser Blast Film Society screenings at The Royal Cinema, and Emily creates marketing videos, produces short-films and composes indie music; both of them have worked on a number of projects in the past, including We’re In A Fight and the critically acclaimed feature-length film Teddy Bomb – the former of which proved a hit on the independent festival circuit.

Today, they’ve launched a brand-new Indie Go Go campaign for their upcoming horror-comedy film Impossible Horror. From the looks of the campaign, it’s going to be a spook-a-blast of a good time – I mean, just dig on the intense Giallo lighting and black gloves, charming-as-hell practical effects and kinetic visuals. If you’re not stoked on this, then I don’t know what the heck is wrong with you, frankly. Here’s some more information about what kind of tone you can expect from the flick, via their campaign page:

IMPOSSIBLE HORROR is an original horror comedy film from writer/director Justin Decloux and Producer Emily Milling about being creative, grappling with the fear of the unknown, and kicking supernatural ass.

If that doesn’t have you racing to their page to punch the crap out of a donation button, check out these perks: Your scream utilized in the final film! Digital and physical copies of the film – including signed copies of Teddy Bomb! Producer credits! T-Shirts! Poster! Bloodied camera-used props! Physical and digital high fives and friendship!

And there’s tons more, so check out their campaign page and help support some passionate, DIY self-started filmmakers who are creating totally rad art!