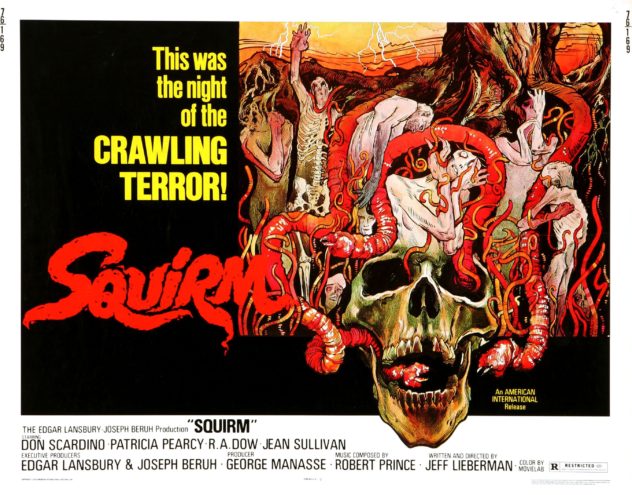 There may very well be nothing better than skipping out on your responsibilities and hiding away from the rain with a good horror flick, and today a lot of people here in Toronto would probably love to do just that. The subways were shut down, re-opened, and subsequently rammed full of commuters. Those of us who walk to work got absolutely drenched, and will be spending the better half of a day airing out our sopping-wet clothes on our cubical walls.

Me, I’m thinking about how nice it’d be to curl up on the couch with a blanket and pop in some horror movies. That got me wondering about some of my favourite rainy-day picks – whether they’re literally drenched with rainy-day atmospherics, or just a good foggy spooky one to pair with the overcast skies, here are some perfect movies to toss on if you’re lucky enough to be spending the day at home.

Return of the Living Dead

This one is a no-brainer, honestly. Puns aside, Return of the Living Dead comes packed with all of the things you want from a rain-day flick: a wild tone that skitters from comedy to horror without breaking a sweat, that perfect “gang of crazy characters” vibe that could only come to you from an 80s classic, and a boat-load of grue-soaked zombie attack scenes – many of which take place in the rain, by the time the finale rolls around. RotLD really rubs your face down in the muck and the dirt, even going as far as to pull the camera right through the rain-soaked ground! It’s one classic that can play on any day of the year, but works particularly well on days like these.

Speaking of dirt and muck, anyone who has walked around after (or during) a rain storm has probably noticed how worms always seem to leave their underground-homes to litter the city sidewalks. That’s exactly what happens in Squirm, but these worms are deadly. After lightning knocks electric wires into the ground, electrified and bloodthirsty worms rise to the surface looking to burrow themselves into your skin. What follows is a super entertaining “nature horror” film from director Jeff Lieberman (of Blue Sunshine!) that has plenty of ooey-gooey effects scenes. Definitely not for the squeamish!

To be completely honest, I’m not the biggest fan of The Fog – I’ve always found it relies too heavily on its atmosphere and tone to be a complete success in my eyes. Regardless, you just can’t compile a list like this without having this The Fog on there – the rolling mist and slow-burn pacing definitely works best on a day like today; plus, there’s nothing like a ghost story to accentuate the sounds of rain-tapped windows and distant thunder. It might even get you in the mood for a Carpenter marathon, and there’s nothing wrong with that!

Pairing the aforementioned grey and overcast skies with Gore Verbinski‘s blue-tinted remake of The Ring might be another more obvious pick, but boy does it play well, still. I’d go as far to say that I prefer the remake to the original, which isn’t something that happens all that often. I’ll always remember seeing this one in the theaters, as we arrived late on a stormy day and had to sit in the front-row. We weren’t expecting much – just a few cheap horror thrills on a sleepy afternoon – but by the climax of the film, I was white-knuckling the theater’s arm-rests as waves of gasps and screams cascaded down from the seats behind us. Now that’s an effective horror film experience!

If you’ve got the film on VHS and a VCR kicking around, then you’ve pretty much got the perfect viewing experience lined up!

Friday the 13th: The Final Chapter

They saved the best for last! Except, no, they didn’t actually. Many of the Friday the 13th films take place in the rain, but The Final Chapter seems to be the film that is really reaching for a dark, spook-filled and slightly sleazy atmosphere (thanks due in part to director Joseph Zito, who directed The Prowler previously.)

Sure, Jason Lives has that great graveyard opening – full of 80s lightning and a worm-infested Jason – but there’s just an odd charm to the fourth installment that is fitting for a day at home. It’s not my favourite of the series (that would be Part II) and it’s not the most underrated (that would be The New Blood), but you’ll certainly have a great time with this one.

The Legend of Hell House

“Murder, vampirism, cannibalism, drug addiction, alcoholism, sadism, mutilation. If it had ended, we would not be here!”

This list wouldn’t be complete with some gothic, fog-drenched gothic horror, and The Legend of Hell House is absolutely my go-to grab when introducing anyone to the genre. It’s a ton of fun, and follows a group of scientists and physicists who spend a week in the titular Hell House where a previous group had been… murdered!? Maybe! Or is it something completely supernatural hiding away in the old mansion?

There’s hissing black cats, over-sized computers, dusty velvet-draped set design, exploding tea-cups and much, much more. I absolutely adore this film, and if you haven’t seen it yet, make today the day that you rectify that situation!

Plus, it has Roddy McDowall!

This thriller-meets-slasher-meets-psychological-twist-a-thon has long-since been something of a guilty pleasure of mine. Actually, it’s not even a guilty pleasure; I thoroughly enjoy Identity, with its ridiculous twist-ending and all. It’s stuffed with a fantastic cast, a classic interest-grabbing set-up (drawing heavily from And Then There Were None,) and one-by-one murders which ratchet up the suspense. Identity is just the kind of cinematic junk-food that is tailor made for a rainy day – and the fact that it was written by Michael Cooney (who’s name you might remember from Jack Frost and Jack Frost II: Revenge of the Mutant Killer Snowman!) only sweetens the deal. Unfortunatley, Cooney would revisit the multiple-personality well later, with 6 Souls aka Shelter, only to find it tapped dry.

Do you have a better pick for a rainy-day horror film? Was there more classic picks that I missed out on? Or how about an old stand-by that you will always reach for? Add them into the comments below!