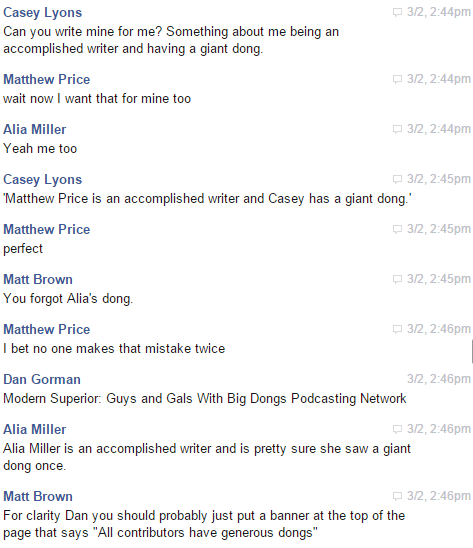 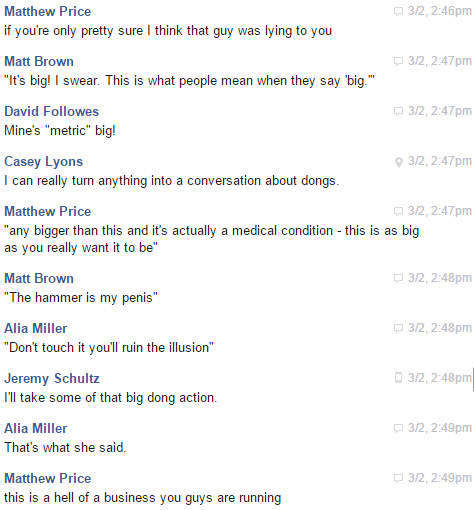 Name: Dan Gorman
Role: Modern Superior co-owner, co-host of See You Next Wednesday & Time Bandits, blog writer, editor, and WordPress/design wrangler.
Bio: Dan’s love — or obsession? — with music, horror movies, podcasting, VHS and all things nostalgic led him to the big city post-College where great bands and rep cinemas, exist in abundance. When he doesn’t have a microphone in his hand, or a b-movie playing on his television, you’ll probably find him at a bar, at home writing about garbage cinema for Modern Superior, or contributing guest blogs to Retroist.

Name: Casey Lyons
Role: Modern Superior co-owner, co-host of See You Next Wednesday & Time Bandits, blog writer, and editor.
Bio: Look at that dude right there on the left, whatta charmer! One of the most knowledgeable guys you’ll meet, he’ll talk your ear off about music, art, movies and more. When not co-hosting two of our podcasts, he might be playing guitar in The Rulers of the Moon or churning out articles about the Miley Cyrus opus LOL.

Name: Greg LeGros
Role: Modern Superior co-owner, co-host of See You Next Wednesday & Time Bandits, blog writer, and editor.
Bio: When he’s not working on his encyclopedic music knowledge, or slinging VHS picks and booking killer acts at Rancho Relaxo, Greg LeGros might be found yelling at you from a stage while fronting Toronto’s indie-post-punk band The Rulers of the Moon. He also really likes the movie Miracle Mile, you should ask him about it!

Name: Alia Miller
Role: Co-host of Super Zero
Bio: Alia Miller is the co-host of the podcasts Super Zero and What She’s Having. She sat beside Don McKellar in a theatre more than ten years ago, and is still telling people about it.
On the web: Twitter

Name: Matt Brown
Role: Co-host of Super Zero
Bio: Matt Brown is the co-host of the Mamo! and Super Zero podcasts, and writes Destroy All Monsters weekly at TwitchFilm.com  Imagine Thor crossed with a 12-year-old girl.
On the web: Twitter | Tederick.com

Name: Jeremy Schultz
Role: Co-Host of DrinkAlong with Dave and Jeremy
Bio: A local barkeep brings his love of discovering craft brew and spirits to the table, where they are quickly quaffed to belch the occasional bon mot. Jeremy has spent most of the past decade watching the best of the worst in horror cinema, writing un-publishable screenplays, ageing, and drinking… but in a fun way.
On the web: Twitter | DrinkAlong

Name: David Followes
Role: Co-host of DrinkAlong with Dave and Jeremy
Bio: You would think that spending time as a bartender, or delivering beer, or as a draft technician would have educated David about beer, but nope… it was his years and years of consumption that did it. A graduate of both the Toronto School of Bartending and The Second City Conservatory, and David’s years as an improvisor, actor and writer have honed him into the podcaster you see (and hear) before you now.
On the web: Twitter | DrinkAlong

Name: Michael K Newton
Role: Host of Two Turntables and a Bottle of Wine
Bio: When not sorting his record collection into impossibly fickle playlists, Michael can be found lending a hand to the operations of TRP, an internet broadcast radio station where he hosts INTERSECTIONS, and the singularly critically acclaimed conceptual radio program, LAST ORDERS, or, hosting the only monthly disco on the planet ignorant enough to fill solely with tracks by The Smiths and Morrissey. What a fun guy!
On the web: Twitter |  twoturntablespodcast.com | michaelknewton.com