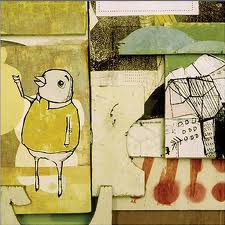 Have you ever heard a record you thought was ahead of its time? How about one that seemed like it deserved a wider audience? Waxing Nostalgic will be an ongoing series of articles shedding light on albums gone unappreciated or overlooked for too long. This post was originally written as the debut Waxing Nostalgic column for Two Way Monologues on October 27th, 2010.

By definition Mock Orange’s Mind Is Not Brain may not have been ‘ahead of its time’, but I truly believe their 2004 record missed it’s time in the spotlight. Coming off of two fairly successful punk/emo records (Nines & Sixes, The Record Play), Mock Orange took a complete left turn and released First EP – a solid slab of crunchy indie-rock. It was a big step forward for the band, but more importantly it was a pretty nice little EP. Long-time fans complained about the major change in sound, but many sensed the turn coming after The Record Play‘s slower tempos and stylistically varied tone. I always liked Nines & Sixes more than The Record Play, but that’s a debate for another time.

Mock Orange seemed poised for a breakthrough with what would be their sixth record — and first full length featuring their more accessible new sound. The band recorded Mind Is Not Brain in 2003 with producer J. Robbins (Dismemberment Plan, The Promise Ring), but the record would not see a release until over a year later. The reasoning behind the delay was that their label at the time (Dead Droid Records) had been sued by George Lucas for copyright infringement – they have the patent on the word “droid” – and the record got caught in the crossfire.

A delay of just over a year might not sound like a long time in hindsight, but imagine having what you thought could be your best record yet in the can, and you can’t even release it. It certainly felt like a long time to me between the announcement of a finished record, and then not getting to hear it for another year. I really think with the right label, Mind Is Not Brain could have at least reached the audience it deserved: indie-rock fans.

What sells the album the most – to my ears – is that guitar tone. Mock Orange are conservative with their distortion – using slight overdrive to pepper the clean guitar tone rather than punching it into the red the whole way through. Their penchant for stop-start rhythms and technical guitar lines from their days as a mathier band still show up here and there (“This Nation”, and the title track are good examples), which meshes well with their new-found ability to build and crescendo a song towards a satisfying conclusion (“Payroll”).

Singer/gutiarist Ryan Grisham’s voice and lyrics remind me a bit of Stephen Malkmus at times (especially the opening of “I Keep Saying So Long”), and fans of Built To Spill will enjoy his guitar style. It’s riffy and melodic, but not afraid to get a bit jammy when the time comes for it. I’ve always thought that Heath Metzger’s drumming is what helped Mock Orange’s earlier material stand on it’s own two feet — he’s extremely talented; on Mind Is Not Brain he reels it in a bit – but you can still hear in his fills and subtle accents how great a drummer he really is.

So, If you’re in the mood to take a chance on a record — and like me you have a soft spot for the sounds of 90s indie rock — Mind Is Not Brain might be right up your alley. Most recently, they dropped Disguised as Ghosts in 2011 – a folkier, more subdued album that is still entirely worthy of your listening time. Don’t just take my word for it though, I’ll leave you with some samples of what other people have said about Mock Orange’s Mind Is Not Brain:

Sounding like a Midwestern Modest Mouse high on Pavement, they delightfully rip through stabbing indie rock and crunchy (ironically) feel-good melancholia. […] Mock Orange really are indie rock’s secret weapon — they are above the emo fray, hark back to greats like Hüsker Dü as well as contemporaries like Love As Laughter, and never rely on the simplicity of overplayed punk-pop. Frankly, they can do it all, always with an unhinged lo-fi edge, and not giving them some serious attention would be criminal. – Allmusic.com

Grisham’s melodies throughout are as good as ever, and often pack quite a range, making them very original and never cliché. […] Mind is Not Brain showcases a hard-working band finding their strong suits and creating an all-around great album. There is not a track of filler on this album. – Punknews.org