“We dare you to watch the last 30 minutes of this film without screaming, covering your eyes, or running from your seat!”

The Beast Within is a movie that never seems to fully click into place, despite having plenty of interesting pieces to work with. First and foremost, the film marks the debut of a one Tom Holland – who’s name you’ll remember from adorning such films as Child’s Play, Fright Night, Psycho II, Class of 1984 and more. All of those films are resounding successes, in my eyes. He injected both the killer doll and vampire genres with a much-needed jolt of energy, and managed to concoct a genuinely great Psycho sequel despite having the cards stacked against him. From afar, The Beast Within looked and sounded like it would be a fresh spin on the coming-of-age horror film. So what happened?

I don’t know, actually. The Beast Within is a rare-beast in more ways than one, but to quote a particularly apt Letterboxd user review from Joe Scaramanga: “[The Beast Within is a] good example of what happens when a big studio tries to make a ‘serious’ film cashing on an exploitation trend, in this case the prosthetic werewolf effects of The Howling/American Werewolf. (see also The Prophecy).” Joe certainly hits the nail squarely on its head here, in a far more eloquent way than I could ever have put it.

The Beast Within has almost as many elements that work for it as it does against it. I’ll start with the good. The plot follows Eli McCreary (Ronny Cox) and Caroline McCreary (Bibi Besch) as a recently married couple that run into some car trouble. After Eli leaves for the gas station, Caroline is assaulted and impregnated by some kind of swamp being, and the film cuts to seventeen years later. Their son, Michael, has grown into a seemingly normal teenager that has started to have some health issues. From there, the film becomes both a chase film, a town-hiding-a-deadly-secret film, and a coming-of-age-as-curse film. All of these movies are battling for your attention, but to be completely honest they’re all actually quite good ideas. The set up of the film is unnerving, and each plot thread has enough intrigue to draw you in. The film is segmented into chapters with title cards detailing “The First Night”, “The Second Night”, etc., which also makes for a good werewolf-esque structure to lean upon as Michael escapes and returns nightly. And speaking of Michael, actor Paul Clemens does a good job here playing both the every-teen that you never see too much of – in order to keep a bit of distance emotionally for when he turns monstrous – and creepy. There’s just something about his look that adds to the character.

As mentioned before though, it all never fully clicks together. Threads are dropped for stretches of time, and when they pop back up there’s a real “Oh yeah! This is still going on.” feeling. The script references the cicada multiple times, as Tom Holland has gone on record as saying he was attempting to use their mating cycle as an influence on the story here. It’s not enough of a through-line though, for my taste – it feels more like a dressing to the script than true subtext. It’s interesting though, nonetheless. 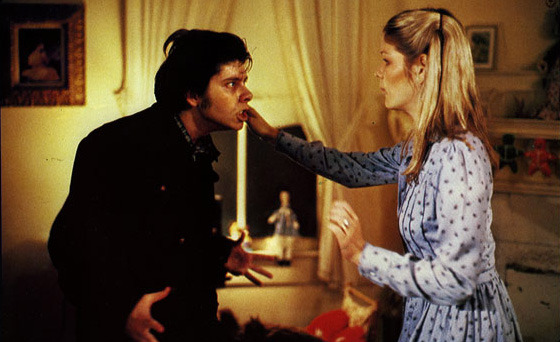 The effects scenes build and build until the transformation scene, which is alternatively really awesome and kind of silly. When Michael’s head starts ballooning up, it’s hard not to laugh. When the scar on Michael’s back starts to split open and puff up, it’s thoroughly revolting. One interesting thing about the film that I really enjoyed though, was the editing. Aside from a generally experimental feel at moments, The Beast Within‘s editing seems to be ever-so-slightly toying with time. For instance, when one character is stabbed and slowly falls over, every cut seems to be pushing his fall back in time a little, making the whole thing feel freakier and more otherworldly than it would have otherwise.

The picture leads up to a decent final act, and it’s no wonder the marketing campaign stressed over and over about the “final thirty minutes” of the film. Up until then, it’s a grab-bag of ideas that, while interesting, never fuse into a wholly satisfying genre picture. Coupled with a pretty damn abrupt ending – which doesn’t even take the opportunity to tease a sequel when that is obviously what it’s going for – you have a film here that may only appeal to certain tastes. I found it worthy of a viewing as a scrappy piece of early-eighties genre filmmaking – particularly when it finally turns into a straight-up monster flick – but others may be severely disappointed.

Episode 2 - Can I Get Some Podcast Started For You? feat. Dave Howlett