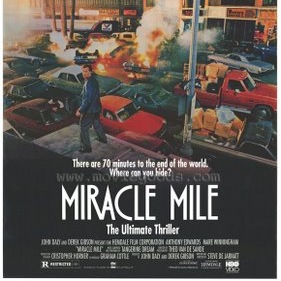 We don’t always know why we love the movies we love. With some we can forgive awful acting, gaping plot holes and terrible scripts. Sometimes a movie affects you in an inexplicable way, allowing you to see past its problems, giving you a personal gem that maybe only you can truly enjoy.

Miracle Mile is one of those movies for me. It’s not a terrible film, mind you. It’s just not a terribly good one. But, for me, it’s fucking fantastic. I have tried showing it to people in the past, to share its unique awesomeness. My efforts were met with snickering and unpleasantries. Even from my own mother who, in confusion, asked “Sooooo… you LIKE this movie? Is it a so-bad-it’s-good thing?” These moments can be very frustrating – but I will once more stand up for this flawed beauty.

Released in September of 1988, Steve De Jarnatt’s Miracle Mile is, at its core, a love story. It is also a race-against-the-clock-nuclear-Armageddon-low-budget-thriller. It’s the story of Harry (played by Anthony Edwards), a romantic young man who by chance receives a phone call informing him that nuclear war will break out in 70 minutes. Harry begins a frantic mission to escape the city with Julie (played by Mare Winningham), the girl of his dreams.

The Cold War and fear of impending nuclear assault fueled films of the 1980’s with a seemingly never ending supply of inspiration. From The Manhattan Project to Class Of Nuke ‘Em High, the big bomb and it’s many side effects were the go-to villains for many film makers – in most cases, the fallout was the star attraction. Straight to video post-apocalyptic films dominated the shelves of video stores, classy pictures like Bronx Warriors, Steel Dawn and Hell Comes To Frogtown, to name a few. I had no problem with this. I love Post-Apocalyptic movies more than just about anything, and The Road Warrior is likely to blame for this. Given the choice of genre, I’ll take it 9 times out of 10. I love the bleakness of it all – so much.

Miracle Mile, however, is not a cold look at the wasteland of humanity and the consequences of our arrogance amidst a barren landscape of despair. It is instead a look at the fleeting moments before the end. And that is one of the things that makes it so good – it’s a small, personal story that gets larger and larger. 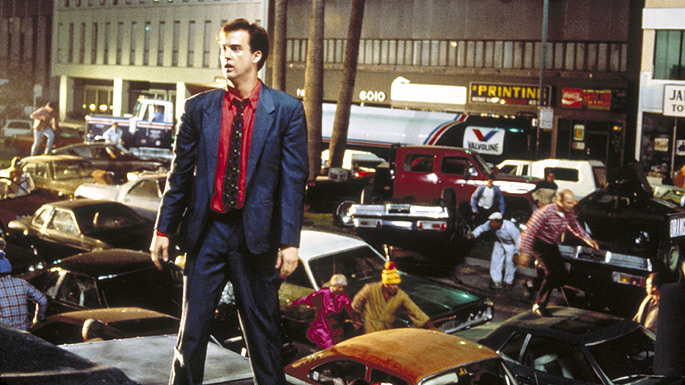 Get out of my way, all of you! I have to get to Sears before they close to return this shitty suit!

The characters are likable and relatable. Anthony Edwards isn’t a somber anti-hero staring into the apocalypse with a steely gaze and perfectly measured sense of detachment, he’s a nerdy musician with an absolutely terrible blue suit. Mare Winningham isn’t a scantily clad Amazonian buxom blonde, she’s…well, she’s Mare Winningham and she’s kinda weird. They’ve only just met, but I totally buy their interest in each other. And I totally buy Harry’s decision to risk everything to find her when he gets the news that the bombs are going to drop. He’s a lonely romantic who isn’t going to let a nuclear bomb come between him and his one chance at love. He sees it as fate and never falters in his faith that they are meant to be.

The love story is a strong foundation for the film, but it would be all for naught without the suspense. The tension is laid out nicely and escalates almost perfectly. When Harry receives the random phone call warning him of impending doom, he has to decide whether or not to believe it. He, of course, eventually does, but the audience is left to decide for themselves if it’s for real or not. And that unknowing is the true antagonist of the film. Is Harry a romantic hero, or tragically just a poorly dressed Chicken Little? And with that foundation of suspense in place, the other layers fall in naturally. Because you are never certain that Harry is going to beat the clock, never certain of his decision, you are forced to take the ride with him until the surprising end of the film.

Now, I am quite aware of the problems with this movie. Is there some bad acting? You’re damn right there is. Are there moments of absurd convenience? You bet your ass. Does it contain some eye-rolling, cheeseball moments? Of course it does. Is Harry’s suit really that bad? It really is. But I just don’t care. The strong elements of the film are enough to make it memorable and re-watchable. There is a certain air about this film that I really like, and perhaps that’s all that matters; the feeling a movie gives off. There’s a pretty solid supporting cast featuring Mykelti Williamson, Kurt Fuller and Brian Thompson, but it’s Anthony Edwards’ starry eyed performance that really holds it all together.

Maybe the tagline promised too much, as it boldly proclaimed “PREPARE TO BE BLOWN THROUGH THE BACK OF THE THEATRE!” That might be a bit much. Maybe it should have been “PREPARE TO FIND SOME VERY LIKABLE THINGS ABOUT THIS MOVIE!”

I can watch this thing over and over – I love its optimism and I love its darkness. Maybe its nostalgia, maybe I saw it on the right day at the right time. Maybe it’s an underrated gem from a different era of movie making. Even if I’m wrong (I’m not wrong), you should check it out for yourself.