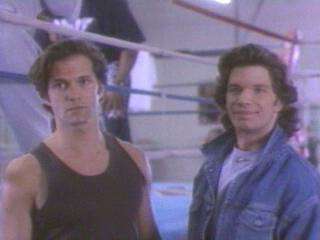 It’s mullet vs. mullet in To Be The Best Mullet! Wait…

About five or six minutes into To Be The Best, at least four or five cars had been totaled and a helicopter exploded – and this was all before a motorcycle chase transitioned from the aqueducts of Los Angeles straight into a little league game. At this point I hadn’t even figured out any of the character’s names yet, so clearly I was totally on board with this offering from the oft-reliable P.M. Entertainment – purveyors of some of home video’s most lobotomized and entertaining actioners.

Finally, I got a grasp on the plotting through some hilariously awful dialogue – something kickboxing teammates something rigged Championship and kidnapped girlfriend something punch-punch-kick. The girlfriend character really seems to want the main dude to give up fighting for good and so he promises to quit the business and marry her. This leads to an incredible scene where some of his Fisty Fight Punching Championship foes burst in on his wedding, only to film a live-to-air news segment? A brawl ensues, and the priest takes it upon himself to brandish the pistol he’s been hiding all along to break it up. Amazing. I’m loving this movie.

Unfortunately, as they say “Nothing Gold Can Stay” and in the case of To Be The Best: “Nothing Action-Packed Can… stay… action… packed.” I’m sorry.

To Be The Best gets dragged down by a second half that spends way too much time in the Kickboxing ring. Hey P.M. Entertainment, if I wanted to watch Kickboxer, I’d watch it. Or, alternatively, I’d watch Kickboxer 2: The Road Back. Or maybe Kickboxer 3: The Art of War. If I was feeling really saucy, I’d pop in Kickboxer 4: The Aggressor before moving on to Kickboxer 5: We Ran Out of Stuff to Put After The Colons.

My point being, is that as much as To Be The Best was filled with some pretty fantastic moments, it’s all fairly top-loaded and it doesn’t maintain the stupid-energy that something like, say, Rage does. Now that’s a stupid movie full of bloodless action that I’d be happy to revisit sometime soon.