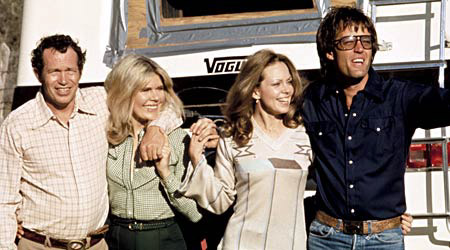 Race With The Devil opens with a truly fantastic semi-animated credit sequence that appears over a score of gonzo, squelchy free-jazz. It’s apparent – even from this short sequence – that this film isn’t content to function as your basic 70s thriller.

Race With The Devil – directed by Jack Starrett and starring Peter Fonda and Warren Oates – follows the story of two couples who plan to drive their RV from Texas to Colorado. Of course, because this film is not only a thriller but a pseudo-supernatural horror film as well, they run afoul of some frisky-yet-murderous satanists along the way. After witnessing the cult’s foul act of ritualistic sacrifice, it’s up to Peter and Warren – who are joined by Lara Parker and Loretta Swit – to make their escape through the rural back-roads of America.

Director Jack Sterrett (Slaughter, The Losers) sets things up nicely, getting the aforementioned sacrifice out of the way early – which leads us into the most tension filled section of the film. Sterrett maintains a real sense of dread as the cult members take chase, not unlike the dark foreboding sensation you’ll find in films like Stephen Spielberg‘s Duel or Richard Franklin‘s Roadgames.

Some elements haven’t dated perfectly – the cult may not be the most visually terrifying bunch of chaps you’ll lay eyes on – but for the most part Race With The Devil avoids dropping into total goofiness. Coupled with some well played paranoia – and the slow realization that this menace may not actually be confined to just a handful of cult members – Race With The Devil actually manages to be a thoroughly entertaining film, if you can overlook it’s slightly draggy mid-section. Plus, there’s a totally awesome rattlesnake attack out of nowhere, so it has that going for it too.

Jack Sterrett even directs the movie with surprisingly kinetic style, which is especially apparent during the wonderful scenes of vehicular carnage – of which there are plenty in the final act. Yes, Race With The Devil is packed with the kind of car-crashes and stunts that look and feel scarily real – well, because they are. Tack on a delightfully bleak finale with convincing performances, and you’ve got yourself some ideal genre-blending entertainment.