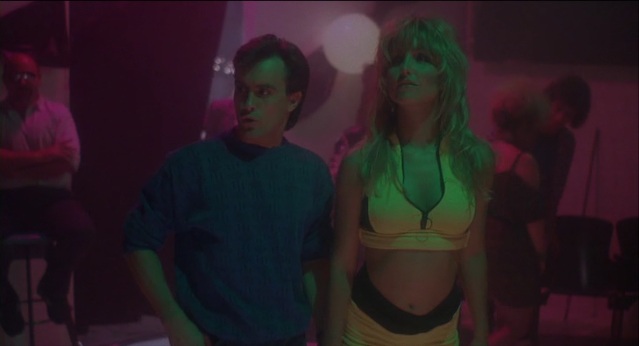 If you’re anything like me, and you just purchased the recently released 4-disc Action Packed Movie Marathon (Shout! Factory), I’m willing to bet the Cyclone art caught your eye first. “What’s this? A Jeffery Combs flick I have yet to see? Directed by Fred Olen Ray? It’s about a high-tech glowing motorcycle of some sort? I’m in!” you probably said, excitedly. Okay, maybe you don’t talk to your DVDs like I do, but my point still stands. Unfortunately, your excitement isn’t long for this world, as Cyclone is a fairly middling piece of 80s schlock with only a few scenes of laser-blastin’ motorcycle action.

The story goes like this: when Heather Thomas‘ super-scientist boyfriend – played by Jeffery Combs in an extended cameo – is murdered, suddenly a handful of sketchy characters are expressing interest in the uber-tech powering his laser-helmet equipped super-cycle – and it’s up to her to keep it out of their hands!

Thomas spends the following 86 minutes dodging two bumbling cops played by Tim Conway, Jr. and Michael Reagan – who thankfully usher in the film’s funnier moments – and two punk henchmen who have been sent by Martin Landau to retrieve the motorcycle’s clean-energy technology. Yes, Martin Landau acts in a Fred Olen Ray flick, and he definitely adds a touch of class to the proceedings – even if he’s stuck in an office the whole time.

While this all sounds thrilling, mostly we’re treated to classic Fred Olen Ray Time-Padders™ such as: Extended driving scenes! Plenty of jokey dialogue scenes! Overlong interrogations! More driving! Yes, this is exactly the kind of movie where a character will pre-tape an entire explanation, complete with gaps and pauses for effect, just in case he ends up dead and needs to pass on some vital information. Speaking of which, I don’t know why Heather Thomas’ character wasn’t laser-blasting her way out of every predicament she found herself in – Jeffery Combs clearly alerted her to the powerful nature of his technology from beyond the grave. What’s up with that? With this technology she should be unstoppable!

One of the most memorable scenes comes early on in the picture, when Combs and Thomas visit the most hilariously un-punk “punk club” ever. The semi-infamous LA punk band Haunted Garage show up there as well, whose lead singer Dukey Flyswatter you may remember as the voice of Sorority Babes in the Slime Ball Bowl-o-Rama‘s killer Imp!

Aside from one fairly excellent car chase, all of the action in Cyclone is back-loaded into the final 5 or 10 minutes of the film. Make no mistake, there’s some beauty stunts and ‘splosions in there – many of which are impeccably executed by the late, great Dar Robinson – but you’ll be waiting around a while for them to arrive.

Overall, Cyclone isn’t a total waste, but I’d say it functions best as a “toss it on in the background” viewing. Otherwise, you might want to take some advice from 3B Theater – and make sure you have plenty of beer and wisecracking friends on hand to skewer along with, to wring maximum enjoyment out of Cyclone’s plodding-yet-brief running time.

Episode 68 - Before Midnight & The Internship