To film the majority of a movie within the guarded walls of Disney World, especially one with a message that is marginally defamatory towards the entertainment juggernaut, seems like an impossible task. And yet Randy Moore’s 2013 effort, Escape From Tomorrow, did just that. As a result the film has received a great deal of press and just the right amount of legal action from Disney to elevate it to the status of ‘buzz film’. But will it be remembered for its content or will time reduce it to the faded memory of a pretty good gimmick?

The film starts out on the last day of a family’s magical Disney vacation as Jim (Roy Abramsohn), the patriarch, is on the phone being laid off from his job. Determined not to let the devastating news ruin the trip he decides to keep it to himself, despite the insistent inquisition from his wife, Emily (Elena Schuber). They arrive at the park and Jim immediately becomes enamored of two YOUNG teenage girls who are also visiting the park. He also begins to suffer violent hallucinations, seemingly as a result of the stress of his professional and family life. He visits the park’s infirmary and finds out that his hallucinations may be caused by a potentially fatal new disease called ‘the cat flu’. He meets a woman who posits a theory that the Disney princesses are involved in a prostitution ring; a theory that, within the reality of the film, may or may not be true. He continues his day with his family, all the while encountering characters who pose a threat to his tenuous sanity. 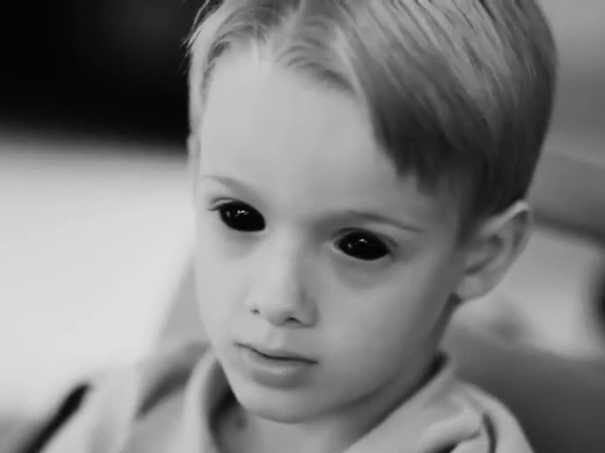 Father, I shall wrest from you the crown of dominance over the dominion of this family. Also I want one of those Mickey shaped ice cream things.

Escape From Tomorrow is an ambitious project, to say the least. At its core it is about a man’s attempt to make sense of a life he feels has been compromised by the choices he’s made. He attempts to validate his vitality by essentially stalking the two young girls. The movie also throws in a bit of commentary about the seedy underbelly of a society that wears a mask of unrealistic integrity. It also talks about a son’s inherent desire to overtake his father’s alpha male position. In short, this is as shamelessly an ‘art film’ as I’ve seen in recent years. Does it all work? Nope. The pacing of the film is almost defiantly uneven. The character of the wife is so two dimensionally shrill that it verges on misogynistic, though it could be argued that the intention is to demonstrate Jim’s unfair view of her.

One thing that really struck me was the use of awkward green screen. There are a few shots where the characters are clearly pasted into the scene. At first I assumed that this was due to budget and access constraints. But as I watched these scenes started to look an awful lot like scenes in old Disney classics where Dick Van Dyke and Julie Andrews danced together in front of a matte painting of an olde tymee rooftop. Was this a stylistic intention or was it sloppy film making? I found myself asking this question a lot during the proceedings.

The end result here is a shambling art-house mess of reality-warping, morality lesson-implying and tongue-in-cheek theory-baiting. That said, I do suggest you see this film as it really does entertain. Don’t expect coherence, don’t expect satisfaction. It’s the film equivalent of a twenty year old, drunk art student enthusiastically poking you in the chest and telling you what’s really going on.

Though, to their credit, they stayed away from any winking references to ol’ Walt’s fondness for the Nazism. Classy move, guys.